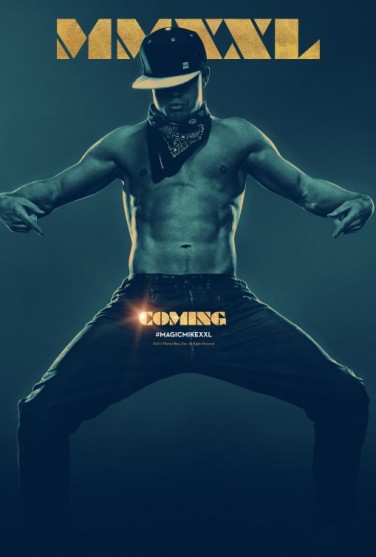 The women loved it. That is, the largely female audience at the preview screening of Magic Mike XXL that I attended were a-whoopin’ and a-hollerin’ every time the men on screen took their clothes off. Which was often. To which I reply: if that’s what you want, watch porn. It’s more honest, and you don’t have to sit through the pretense of a story. To be fair, I’m sure that there were folks – and not just me and my two fellow (female) film critics sitting next to me – who did not fall under the spell of beefcake, but they were, of course, not so vocal. Judging by the decibel level of the screams, however, this film might just have a shot at a good opening weekend … among certain demographics.

The problem is that this is an absolutely dreadful movie. The first film, Magic Mike, directed by Steven Soderbergh (Traffic), was actually quite fine: a story about a group of working-class guys who just happen to dance in strip clubs to earn the money they need to support their dreams and aspirations. The conflict revolved around whether or not they would get sucked permanently into the dancing lifestyle – putting their ambitions on hold – because the money (and sex) was so good. The dance numbers were well choreographed, and the stars – including Channing Tatum (22 Jump Street) as Mike and Matthew McConaughey (Interstellar) as Dallas, the strip club owner – gave solid performances. It was a gritty well-made drama that offered the additional pleasure of erotic titillation and voyeuristic spectacle.

Magic Mike XXL has a different director – though Soderbergh returns as cinematographer and editor, and the screenwriter, Reid Carolin, is the same – and whether or not that is why the sequel lacks all ambition to be anything other than a striptease (and a bad one at that), who knows? Whatever the intentions of those involved, the movie feels like these folks got together and improvised as they went along, forgetting that in order for us to care about the characters, there needs to be a story. There’s a nominal plot – most of the guys from the first film have decided that they want to compete, one last time, in an annual stripping contest, and drag the no-longer-dancing Tatum back from retirement – but nothing at stake. If they win, great; if they lose, so what? Would that the contest were simply a MacGuffin to get us into some decent dance scenes. At least we would then have that. Instead, the journey is an excuse to show us legions of sex-starved women – mainly older and overweight – who swoon at the chance to be fondled, groped and humped by muscular men. A character played by Matt Bomer (“White Collar“) makes the claim that our stripper friends are “healers,” and that these desperate women benefit from the attention, but somehow the whole enterprise feels half-baked, gross, and deeply misogynistic. Then again, let’s not forget about the screaming women at the preview . . .

Matthew McConaughey is gone (he seems to be getting more discerning as he gets older), so we don’t even get to see him liven up the affair with his cocky insouciance. We do, however, get some new blood: Jada Pinkett Smith (“Gotham“) as Rome, the Dallas surrogate (what is it with strip-club owners and city names in this universe?) in a pointless sub-plot; Andie MacDowell (Four Weddings and a Funeral) as one of those older women yearning to be set free; and Amber Heard (The Rum Diary) as Mike’s jailbait love interest (well, she looks really young, though in real life she’s closer to Tatum’s age than I thought). None of them matter one iota. Just look at the poster, above. That’s what the movie’s selling, and if that appeals to you, then it’s all yours.