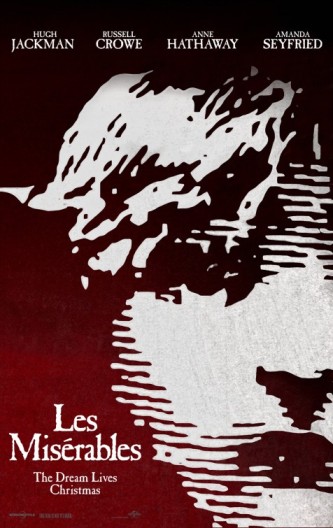 Ah, what a journey . . . from the end of Napoléon’s reign, in 1815, then on to 1823, and finally to the June Rebellion of 1832. 17 years of nonstop singing! Exhausting for the viewer, but just imagine how it must have felt for the characters. No wonder Valjean’s voice is croaking at the finish.

I must confess that I am not the target audience for this movie. I saw the original stage musical version of this in the 1990s, and hated it. The nonstop movement of characters on stage, singing all the way, with absolutely no dramatic pauses, drove me nuts. I would just start to enjoy a moment, lingering on a tune that I had actually been able to grasp, when we would be on to the next scene. I felt as if I had been transported to ADHD hell, where the sped up world didn’t strike the folks around me as strange, since I was the only one who had taken my meds.

That said, three songs stayed with me: “On My Own,” “Drink with Me,” and “Bring Him Home.” No, not “I Dreamed a Dream.” I had thankfully forgotten that song until the trailers for Les Misérables started playing this fall (Susan Boyle notwithstanding). Unfortunately for me, only one of the songs I remember fondly was performed to my liking in the film. Samantha Barks does a lovely job singing “On My Own” as Eponine. The same cannot be said – for me – for Hugh Jackman and “Bring Him Home.” In fact, in spite of the universal praise for Jackman’s performance in Les Misérables, even from critics who hated the movie, I found him unbearable and his voice tight and strained. Ironically, since Russell Crowe has come under some criticism for his singing, I much preferred him as Javert. Clearly, in the world of Les Mis, I am out of sync. As the French would say, “C’est le monde à l’envers.”

A further irony for me was that, in a movie of epic 157-minute length, in which so many songs and reprises were rendered faithfully on screen, “Drink with Me,” felt shortened and rushed. Why, Tom Hooper, why?

To end this rant, let me make myself even more ridiculous in the eyes of fans of the musical and its adaptation by mentioning that I would gladly re-watch the 1978 made-for-TV movie again and again than be subjected to what is sure to be constant Oscar buzz for this god-awful mess. I would also enjoy jabbing a knife into my skull, I suppose.

So, many – but not all – of the film critics out there were not pleased with the film, and here is a brief sampling of the reviews:

It’s almost not fair for me to comment further, since I have made clear that I am an alien in the Les Mis universe. My filmgoing companion for the evening enjoyed the movie, and we had a pleasant conversation afterwards. We agreed that the three best voices – for us – were the three young leads: the aforementioned Samanatha Barks (Eponine), Eddie Redmayne (Marius) and Amanda Seyfried (Cosette). In Dana Stevens’ review, she writes that Seyfried has the worst voice. ?!?! I guess we all have such conflicting reactions to this film and to singing, in general. Anne Hathaway, who is predicted to be nominated for a Best Supporting Actress Oscar, did not move me. Perhaps its not her fault. Being that close to her as she emoted wildly was just too much for me.

And I think that is what we will see in the reactions to the film. There are those, like my companion last night, who will respond positively to the proximity to the actors and to the handheld camera work that “keeps it real” (as my friend said). Then there are those, like me, who will realize that there is a reason why most musicals are post-synced (here, the singing was recorded live, rather than dubbed later), with the camera a fair distance away from the faces. It is just not that pleasant to be 3 or 4 inches away from someone in the full throes of a song (we are actually that close, at times, as there are also many extreme close-ups). If you enjoy raw in-your-face emotion for the sake of it, then this film might be for you. If you are a cold-hearted bastard who hates the universe, then maybe not (just kidding, that was my imagined voice from a fan of the film . . .).

Since the reviews, above, cover the full gamut of critical appraisal of the movie, and since I wish to get on with my life, I will just end with a few of my notes, hastily scribbled in the dark last night:

Happy New Year to all, even those who now hate me. 🙂