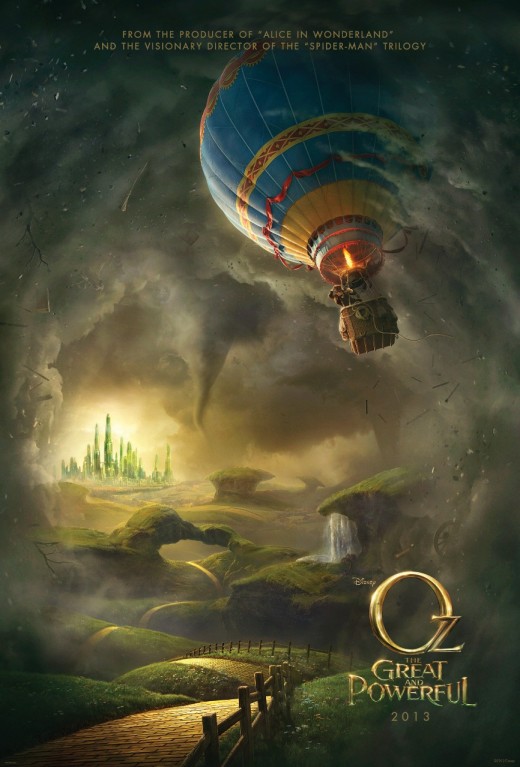 Let me just start out by stating clearly, for the record, that I have seen far worse films than this, and that I had a genuinely good time watching it. It’s nothing special, and no rival in cinematic glory to its 1939 cousin – for which this is supposed to be a prequel – but it’s sweet in spirit and a lot of fun. Unless you’re a brunette. of course. Then it sucks.

The story, which starts in Kansas, in 1905, follows Oscar Zoroaster Phadrig Isaac Norman Henkel Emmannuel Ambroise Diggs (James Franco), a traveling circus magician who goes by the name of “Oz” (Phew! Thank God! Much easier!), as he propels himself further and further towards mediocrity and caddishness as neither a very effective prestidigitator nor sincere lover (of local women). He’s also very mean to his loyal assistant, Frank (Zach Braff! Where ya been?). One seduction too far, and Oz finds himself pursued by the circus strongman. Whoops! But along comes a tornado, and aboard his trusty hot air balloon, Oz finds himself magically transported to the Land of . . . Oz.

Here, he finds witches. Some have dark hair. One is blonde. Guess who the good one is? In Oz, Oz (confused?) must look deep within himself to discover qualities he never knew he had, so that he can defeat the forces of dark hair (wait – he’s a brunet, too!)… I mean … darkness, fulfill the prophecy that predicted his arrival, and save Oz (the Land? himself? both!). In the process, he also becomes a pretty good magician. And a more sincere lover (of one local woman/witch, anyway).

It’s frivolous, sloppy in its storytelling, but harmless, and unlike Jack the Giant Slayer, it’s only PG, and a pretty good family film (unless you have dark-haired young girls). The final showdown between Oz and Glinda and the bad witches is actually very well staged. I didn’t like the flying baboons, which managed to be not half as scary as the flying monkeys in The Wizard of Oz, and there’s still a little too much fun being had at the expense of little people, but I did laugh out loud a few times.

I also liked how the film started out in the old 1.33:1 (or 4:3, as it is also called) aspect ratio, and in black & white, to mimic the original 1939 Kansas framing. I did not like, however, the awful CGI color landscape we first see when Oz flies out of the tornado. Very ugly! Things got better from there, but I was not impressed with that sequence. It’s weird that they wouldn’t try and make that arrival truly spectacular, since first impressions are so important and, well, you only get once chance to make them. Just as color seeps into the frame, the edges of the screen re-set to a widescreen aspect, and while that is nice, the design of what’s on screen is not.

As far as the witches go, I thought Rachel Weisz was quite good (but then she always is), but not Mila Kunis (whom I usually like). The latter just didn’t seem to know what she was doing. Michelle Williams was, quite simply, sublime. Truly. I have been a late-comer to the Michelle Williams fan club, but in addition to being one of the finest actresses of her generation (and having acted in one of the most underrated, if imperfect, films of 2012, Take This Waltz), she is also lovely to look at. Then again, she’s blonde. Ha!

James Franco, in my opinion, was perfect as Oz, in spite of what Todd McCarthy (of The Hollywood Reporter) has to say. I found his trademark sarcasm just the right note for a man in need of a few life lessons.

So while I would not urge anyone to rush out and see this film, I do think that you could make worse choices than to go watch it. Bring your kids, or even go on a date. Yes, you’ll groan at some of the creakiness of the narrative, but you’ll probably have some fun, as well, and get swept up in the how-will-he-get-out-of-this-fix final battle scene. I suspect this film, unlike Jack the Giant Slayer, will actually do OK at the box office, as it’s probably strong enough to generate some decent word-of-mouth recs.