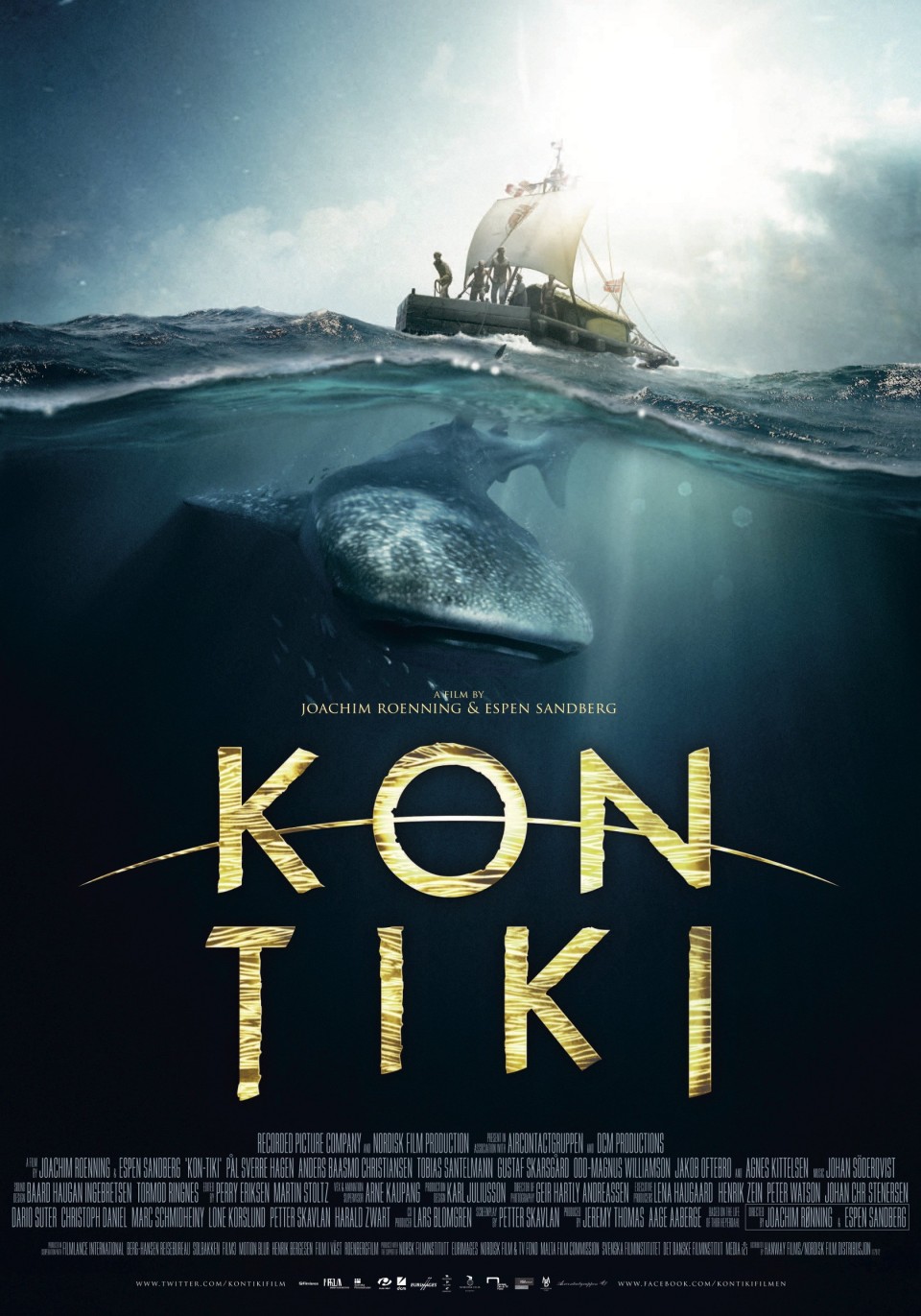 The first thing you should know about Kon-Tiki, one of the 5 nominees for Best Foreign Language Film at the 2013 Oscars, is that you will only be able to watch it in English. That’s right. English. Hmmmm . . . given that there are plenty of films made in English that get nominated for regular Oscars that are also financed in part with “foreign” money (and that’s not counting the studios – like Sony – that have their corporate headquarters in other countries), it does make one wonder what this film was doing in that category. Well, it turns out that the filmmakers made two separate versions (with the same actors) – one in Norwegian and one in English – to increase their box office chances. Huh. The last time I heard of people doing this was in the early sound era, with films like Dracula made in multiple languages (before sound arrived, films had traveled easily between countries, since all one had to do was switch out the intertitles, and so some producers were still trying to work out how to adapt to the new system – eventually they just sold their films abroad, and let the other countries decide whether to subtitle or dub). Interesting. I still think it’s kind of wrong for this film to have been nominated in this category, however, especially since it beat out other solidly foreign-language films from the shortlist. No matter. Not my call. No one cares.

The second thing you should know about Kon-Tiki is that it is about Thor Heyerdahl, the Norwegian anthropologist who came up with theory, in the 1940s, that Polynesia had not been colonized from Asia, as had been previously believed, but from South America, by people navigating on the currents on balsa-wood rafts. No one really believed him, so he decided to gather a crew of like-minded Norwegians (and one Swede), and set sail from Peru on a vessel modeled after the earliest Polynesian ships, in order to prove his theory was correct (or, at least, possible).

This film follows Heyerdahl, played by the very likable Norwegian actor Pål Sverre Hagen, as he develops his theory, is rejected, finds his crew, and then spends 101 days crossing the Pacific. During that passage, Heyerdahl and his comrades face depression, sharks, and one very big storm. When they finally land on the Raroia Atoll in the Tuamotu Archipelago, they embrace both dry land and the fact that they have successfully proven that such a voyage could have led to Polynesia being colonized by ancient Peruvians.

Let’s leave aside whether or not there is actual merit to Heyerdahl’s ideas. My understanding is that he opened up certain possibilities that had not heretofore been considered, but that he also overreached. In his book The Wayfinders: Why Ancient Wisdom Matters in the Modern World, Canadian anthropologist Wade Davis takes exception to much of Heyerdahl’s methodology. Let that be someone else’s concern, for now, and let’s just consider the movie.

Until the journey begins, it’s actually a pretty gripping story. And then somehow, once we end up on the raft with Heyerdahl and his 5 shipmates, the movie slows to the same slow pace that the men must have endured on their crossing, and we are forced to spend much time watching the interchangeable blond actors bicker, and CGI sharks menace the boat. Plus, if Heyerdahl were really as inept a captain in real life as he is portrayed in this movie, it is a wonder the Kon-Tiki arrived anywhere at all.

There are joys to be found in the beautiful cinematography, though it is this film’s misfortune to have been released in the same year as Life of Pi, a film which showed us just how stunning a film about a drifting boat can be. There are also joys to be found in the film’s brisk opening first act, when the plot is set in motion. But the journey itself – in spite of the grandeur of its purpose – leaves us wanting more.