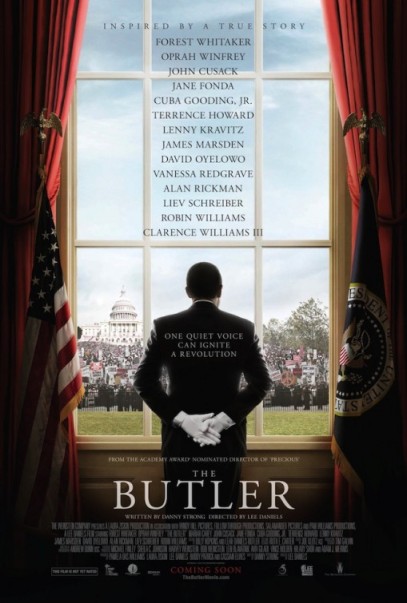 Make no mistake: The Butler (sorry, that’s “Lee Daniels’ The Butler“) is kind of a mess, but it’s an effective mess. And though it lacks the wonderfully gritty texture of Mr. Daniels’ last feature – The Paperboy – or the narrative coherence of his film before that – Precious – it still manages to move its audience and serve its story. It’s quite a sweeping story, as well; one that starts in the 1920s cotton fields of the Jim-Crow South and ends with the election of our 44th President, Barack Obama.

Loosely based on the life of Eugene Allen, The Butler recounts the tale of Cecil Gaines (a fine Forest Whitaker), butler to 7 presidents (Allen served 8), from Eisenhower to Reagan. Born into rural poverty and servitude, Gaines manages, through diligent work and an ingratiating manner towards white folk, to move from a small-town inn to a high-class hotel in Washington, DC, where he comes to the notice of a White House staff recruiter. After a brief interview, where he demonstrates his hard-earned tact and knowledge of expensive alcohol, Gaines is given the job he will hold for the next 30 years.

At first, I was worried that we were being given a 2013 version of Driving Miss Daisy. The overbearing music by Rodrigo Leão – although I like his “Cinema” album – didn’t help. Was Whitaker’s Gaines just going to be a device whereby we bore witness to the actions and evolving consciousness of whites? If so, then I might as well have have stayed home and watched The Help (otherwise known as “Thank You, White People”). Instead, however, Daniels and his screenwriter, Danny Strong, have crafted a tale that trains its focus primarily on the experiences of African-Americans at this time, by showing us the life behind the scenes at the White House and, even more importantly, back home, where Gaines lives with his wife, Gloria (Oprah Winfrey, also fine), and their two sons. It is, in fact, the eldest son, Louis (a great David Oyelowo) – a rebel who refuses to accept his father’s acquiescence to white power and becomes a Freedom Rider and, later, a Black Panther – who drives the story forward through his battles against racism and subsequent tension with Cecil. In a series of smart and chilling montages – the best part of the movie – Daniels juxtaposes  beatings, fire bombings and hose-downs with fancy White House functions. This device constantly reminds us of the great divide between the well-intentioned, but clueless, white presidents whom Cecil serves, and the masses of oppressed people fighting for their right to live free. It’s a great thing to see a movie that both recognizes the importance of Lyndon Johnson’s civil rights legislation and gives credit to the African-Americans on the ground who pushed the freedom agenda forward. Could this film – and others, like Fruitvale Station – signal a shift in how Hollywood tells the stories of Blacks on film? Do we no longer require a white protagonist (see The Help, and almost every other movie ever made about racism) to bring us in? Is this the dawn of a new era? We’ll see.

So that’s what makes the film work. What makes it messy are the distracting cameos – the presidents – by actors who don’t entirely disappear into their roles. From Robin Williams (Eisenhower!), to James Marsden (too healthy-looking to be JFK), to Liev Schreiber (LBJ – fun, but still Liev Schreiber), to John Cusack (Nixon!) to Alan Rickman (Reagan!) – not to mention Jane Fonda as Nancy Reagan! – the list of stars hamming it up is long (though Cuba Gooding, Jr., and Lenny Kravitz shine as Cecil’s fellow butlers). And on the one hand, it’s a good thing that there are laughs to be had, since stories that are ceaselessly serious usually fail to reach us, but so many of these laughs are not there by intent. Still, in spite of this failing, and in spite of a certain looseness of structure, the film is, overall, successful in its goals, and a must-see for anyone who knows little of the Civil Rights era. It also functions as entertainment, which is no small feat, either. Enjoy!