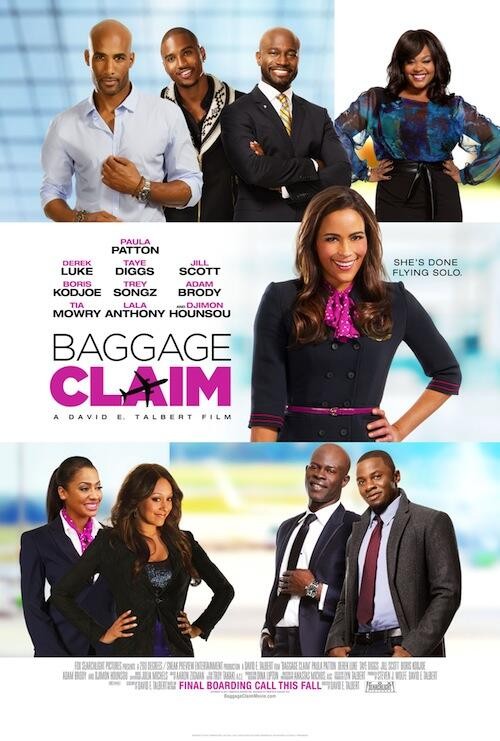 On Friday, September 6, Linda DeLibero (of Johns Hopkins) and I appeared on the Midday with Dan Rodricks show to discuss current trends in African-American filmmaking in their historical context. We briefly mentioned the then-upcoming film Baggage Claim as an example of a movie, written and directed by an African-American filmmaker, that exists outside of any perceived “black genre” (whatever that means), which is really just a comedy that happens to feature African-Americans rather than whites of European descent. And now here we are on the day that Baggage Claim opens, and I am happy to report that the film is both as funny as the best romantic comedies (hereafter referred to as romcoms), and as insipid as the worst. Now that’s post-racial equality! And for you Baltimoreans out there, you can take especial pride in the film, since it was made by Morgan State alum (though, except for some second-unit shots seen through car windows, the movie was not shot in Charm City).

Baggage Claim tells the story of one Baltimore-bred Montana Moore, a beautiful and sexy – yet never married – flight attendant, daughter of a five-times-married mother, and older sister to a younger sibling about to tie the knot. Tired of being alone – and of putting up with her mother’s taunts – Montana has high hopes that her current beau, the handsome and rich Graham (Boris Kodjoe), will pop the question. Since we meet Graham just 10 minutes into the film, you can probably guess that he is not, in fact, the one. But soft! What light from yonder window breaks? ‘Tis the brilliantly scheming minds of her two flight attendant pals, sexpot Gail (Jill Scott) and gay bestie Sam (Adam Brody, one of the few white faces in the movie). They hatch a plan to help Montana cross paths, midair, with all of her former boyfriends, in the hope that they have changed enough to be worth reconsidering. And so we get hijinks galore, and are treated to some fine comedic performances from the likes of Trey Songz, Taye Diggs, and Djimon Hounsou. All along, of course – unless you’ve never seen a romcom – Montana’s greatest hope at love may actually be her childhood best friend William (Derek Luke), who lives across the hall, and who’s last name just happens to be Wright (as in Mr.).

So, OK, you’re thinking, this doesn’t sound very original, and you’ve seen lots of terrible Jennifer Aniston and Gerard Butler films that have soured you on the whole romcom genre. And I get that. But the thing about this film is that the funny parts are actually really funny (unlike, say, the ostensibly funny bits in The Bounty Hunter). Paula Patton, whose character is woefully underwritten (it’s never clear why the fabulously rich and worldly businessman played by Hounsou would want to stay up all night talking to her, for instance, since she has nothing to say), has a real knack for physical comedy, and Jill Scott and Adam Brody are truly hilarious. At times the film is edited at such a spectacularly brisk pace that the jokes come on with perfect timing. Unfortunately, at other times the film just stops cold, mired in false sentiment and a terrible musical score that sounds as if it were designed to play in your local supermarket. Derek Luke, a terrific and charming actor, does his best with his nice-guy role, and Jenifer Lewis, as Montana’s mom, has a witty imperious quality that helps to elevate the clichéd lines she too often has to say above total dreck, but every time we leave Gail and Sam behind, the movie drags.

Baggage Claim is, in other words, a very mixed bag. I still recommend it if you’re looking for a good laugh, but I also suggest preparing yourself for the inevitable gag reflex that may kick in the more serious passages. Perhaps the flight attendants in the aisle can hand out some airsickness bags, just in case.