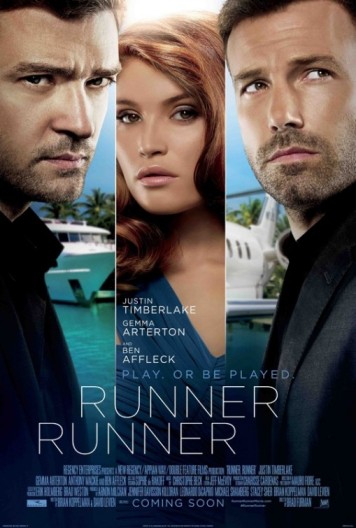 In 2011, Matthew McConaughey starred in a wonderful little legal thriller entitled The Lincoln Lawyer, which was widely heralded as signaling a revival of his then-flagging rom-com hell of a career. That movie was directed, with great panache, by Brad Furman, the director of Runner Runner, which opens today. Would that this new film had even half of the wit or style of Furman’s previous gem. Instead, it just happens to be one of the worst films I’ve seen in a long time, a fact made even worse by the fact that everyone involved with it seems to be trying so hard. But the script, by writing partners Brian Koppelman and David Levien (Rounders, Runaway Jury, Ocean’s Thirteen, The Girlfriend Experience) is stuck at the pedestrian level of a Syd Field 101 college course, and no amount of shaky camera close-ups or frenzied Justin Timberlake jaw clenches can make it work. Adding aesthetic insult to injury, Furman’s skill at dragging a great performance out of a star seems to have deserted him here, and Timberlake – so fine in films like Friends with Benefits, The Social Network and Black Snake Moan – is reduced to mugging and indicating. Finally, I like Ben Affleck as a director these days (Gone Baby Gone, Argo), but when he’s the best actor in a film, you’ve got a problem.

That’s not entirely fair. John Heard makes a supporting appearance as Timberlake’s father, and since he’s always good, he’s good here, too. Some actors just always shine. As for the rest of the film, it’s not even worth recounting the plot. Suffice it to say that it involves online gambling, Costa Rica, gratuitous sex and nudity, as well as violence, and a grotesquely miscast Gemma Arterton as the femme fatale. She has a lot of fine qualities as an actress (in other work), and an interesting face, but she’s no Gilda, which is what this film required (in fact, much of this misfire feels like a bad frat boy knockoff of that 1946 Charles Vidor classic). And in case you’re wondering about the title, it’s a poker term, barely explained in the film. But it’s a fair warning, so heed it and run away.