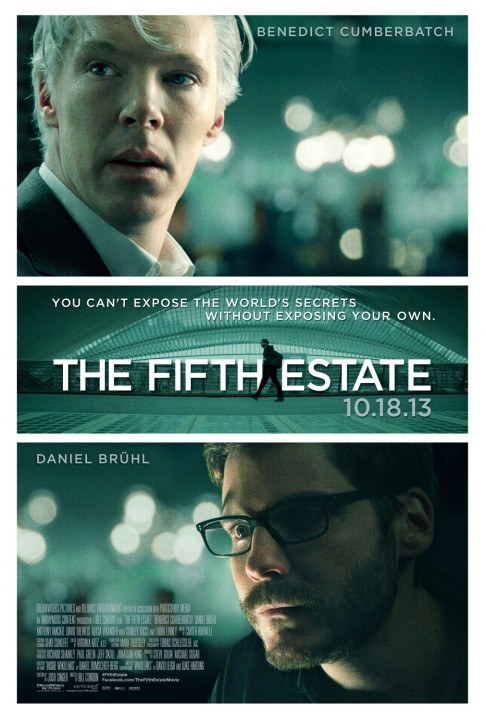 Here’s a quick question for you: do you know what the first four estates are? The first three date from the codified class divisions of the European feudal era: the First Estate = Clergy; the Second Estate = Nobility; the Third Estate = the rest of us. The term “Fourth Estate” was first used in the 19th century to signify the daily press. The term “Fifth Estate” has gained traction in recent years to mean those forces outside of mainstream media that manage to exert significant cultural and socio-political influence on the world we live in. These forces include – but are not limited to – bloggers, tweeters and sites like WikiLeaks.

Never heard of WikiLeaks? Where have you been these past few years? Well, fortunately for you, there have been two films released this year that can explain all you need to know. The first, We Steal Secrets: The Story of WikiLeaks, a documentary directed by Alex Gibney, came out this past May, and is already available for online instant viewing. That film is a fast-paced, well-made portrait of WikiLeaks and its founder, Julian Assange, that manages to effectively reveal Assange as deity, demon, prophet and narcissist. Now comes The Fifth Estate, a fictionalized retelling of the same story (more or less), that has many fine qualities, but that falls just shy of the elegance of its non-fiction predecessor. Go team Gibney!

Bill Condon – director of such previous (sometimes interesting) films as Gods and Monsters, Kinsey, Dreamgirls and, sadly, the final two films of the Twilight saga – knows his way around cameras, graphics and cutting rooms, and The Fifth Estate begins briskly and smartly with a wonderful montage of the development of the Fourth Estate across the ages, with headlines ripped from the dawn of the printing press to the present. This lesson complete, we find ourselves inJuly, 2010, in the offices of the British newspaper The Guardian, the German Der Spiegel, and the American New York Times, as each is about to publish, simultaneously and online, selections from the trove of leaked US intelligence documents that WikiLeaks was soon to publish – in its entirety – on its own site. This moment is the perfect culmination of the summary we have just watched, as it represents – in the eyes of the filmmaker and, perhaps, the world – the true ascendancy of the Fifth Estate. We are reminded of how rapidly the world has changed over the past decade by a news reporter – heard in the background – marveling that this unprecedented scoop has come from “an organization that didn’t exist 5 years ago: WikiLeaks.”

From there, we jump back to 2007, when Julian Assange (Benedict Cumberbatch – terrific, as always) meets Daniel Berg (Daniel Brühl – just seen in Rush, and just as good here). Berg is something of a lone groupie of the little-known Assange, and a true believer in the message that Assange peddles: “privacy for individuals; transparency for organizations.” Berg, younger and insecure – and a better programmer than Assange – is also the perfect new recruit for WikiLeaks, in awe of his hero and easily manipulated. Together – charismatic guru and hardworking grunt – they make a formidable team, quickly scoring victories against banks and tyrants with the secure, untraceable leaks of damning documents.

For two-thirds of the film, Condon keeps everything moving with great gusto, carefully managing the different data streams of the script (by Josh Singer) in a manner both informative and thrilling. I particularly liked his visual metaphor of an open warehouse of office cubicles – with no ceiling – as the virtual space in which Assange and Berg do their work. Even in this, the better part of the film, there are signs of trouble, however, with unnecessary and pedestrian plot points, such as the underdeveloped relationship of Berg and his girlfriend Anke (Alicia Vikander, so strong in both A Royal Affair and Anna Karenina, and so misused here). And I enjoyed the performances of both Laura Linney and Stanley Tucci, as upper level State Department staffers, but am not sure we needed their stories. In an attempt at evenhandedness, perhaps – to show the real-world consequences of Assange’s belief in absolute openness – Condon and Singer lose focus.

The final third of the movie, though, is where things breaks down, with Condon piling conventional melodrama on top of plot contrivances on top of dense action in a mix that slows the story to a crawl. We’re back in 2010 now, and Assange and Berg (no longer a passive groupie, but an adult with a conscience) fight over whether to redact the secret U.S. documents or not (to protect intelligence sources). What should be a searing moral conflict, however, is instead played out as a lover’s quarrel. It’s not wholly uninteresting, but it also doesn’t live up to the promise of the movie’s beginning.

I recommend the film – especially if you haven’t seen Gibney’s doc (which you can always watch, as well, or instead) – but with the above reservations. And I’d like to single out Moritz Bleibtreu (Run Lola Run), one of my favorite German actors (also very good in The Baader Meinhof Complex) as one of the supporting characters whose role – unlike poor Vikander’s – does add to the depth of the story. The Fifth Estate may be far from a masterpiece, but it’s very watchable, and tells a (mostly) gripping true tale. Unless you’re Julian Assange, in which case you’ve already weighed in, and don’t like it.