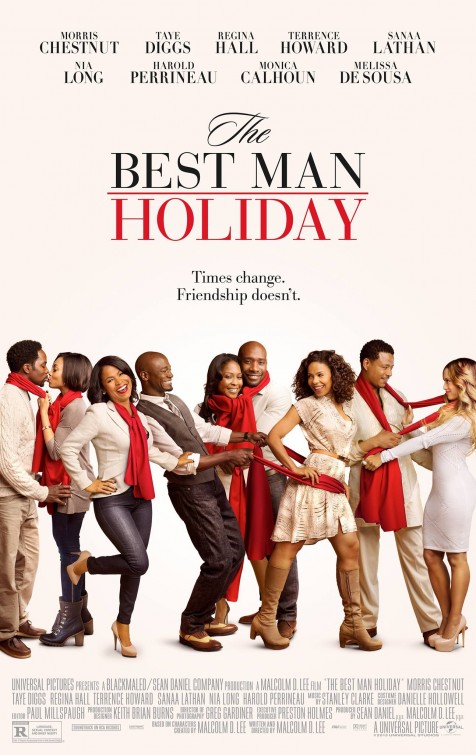 I must confess that I never saw The Best Man, back in 1999. Did you? Have you been wondering all these years what happened to its characters? If so, then The Best Man Holiday may be just the film for you. If not, then before you head out to the cinema, ask yourself whether you like your raucous comedy served with a side of gooey sentiment (sprinkled with Christian toppings). Because that’s what you’re going to get, and for this viewer, the heavy-handedness of the latter ruined my positive reaction to the former. I wanted more Terrence Howard, less Morris Chestnut.

As Stephen Farber writes in The Hollywood Reporter, “The Best Man was a hit in 1999, partly because it appealed to a more upscale African-American audience than Hollywood ordinarily acknowledges.” That previous film, also directed by Malcolm Lee – cousin of Spike – centered on a group of twenty-somethings, friends since college, and their interactions at the wedding of Lance (Morris Chestnut) and Mia (Monica Calhoun). Also in the film were a slew of actors who have since become – to varying degrees – Hollywood and television stars: the aforementioned Howard, Taye Diggs, Nia Long, Sanna Lathan and Harold Perrineau. And while I can’t comment on the first film, Farber’s description most definitely applies to the sequel. The characters are more than just upscale. Many of them – especially Lance, a pro football player about retire – are ostentatiously wealthy. They even have almost exclusively white domestic help (a nice touch).

For the first half, the movie works. We meet (in my case, for the first time) each of the characters in turn, learn about their respective pending crises, and then find ourselves in Lance and Mia’s mansion for a Big Chill-like reunion over Christmas. Most of these folks, by now, have mid-life and mid-career issues, with the glorious exception of perpetual adolescent Quentin (Howard), the story’s much-needed Puck, who gets most of the best lines. Harper (Diggs) is a struggling (formerly bestselling) author; Robyn (Lathan) – his wife – is pregnant, hoping not to have a miscarriage this time; Julian (Perrineau), a school headmaster, has just lost a major donor; Jordan (Long), ever a commitment-phobe, has a new (white) boyfriend who may just be the one to hold on to; Mia harbors a mysterious secret; and the friendship between Lance and Harper has still never recovered from Harper’s admission, in The Best Man, that he had once slept with Mia.

One of the worst parts of the film – in addition to every scene featuring a child and every scene meant to tug at your heartstrings – is the opening credit sequence, where the major plot points from The Best Man are quickly – and incoherently – recapped over one of the sappiest Christmas songs ever produced. After that (during which I wanted to run screaming from the theater), the movie settles down for an hour, and is great fun. If you end up renting the film on DVD/Blu-Ray/instant viewing later, just stop it at 60 minutes if you don’t like cloying and maudlin sentiment. If you’re trapped in a theater, and unable to exit, just focus on Howard (and maybe Melissa De Sousa as a trashy star of a Desperate Housewives-like TV show). You’ll survive. I did.