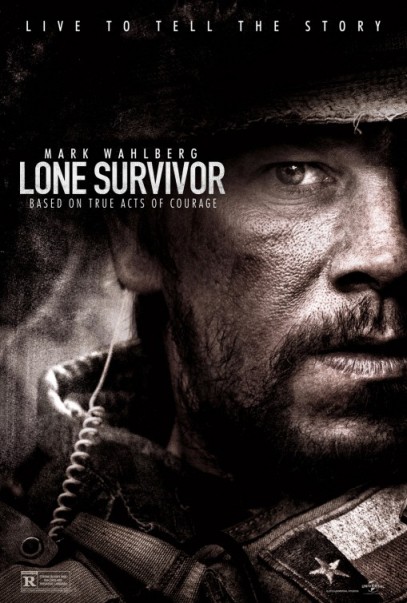 The taglines for Lone Survivor include such gems as: “There’s a storm inside of us. A drive;” “There are brothers that never leave your side;” “Ready to lead, ready to follow. Never quit;” and “The only easy day was yesterday.” When I showed up for the preview screening, I was handed a promotional post card with the following in bold print: “We are never STRONGER than when we are one” (emphasis in original). If, like me, you are instinctively turned off by hyperbole, jingoism and hyperbolic jingoism, then these phrases are a real turn-off. Their crude macho swagger does a disservice to the sacrifice of the men and women in uniform, reducing the monumental efforts of our soldiers to simplistic action-film slogans. Fortunately, the film, itself, is far better than this crude advertising campaign promises. In fact, it’s one of the best combat films I’ve seen since Saving Private Ryan.

Lone Survivor tells the harrowing story of Marcus Luttrell (the “lone survivor” of the title, who actually plays a small part in the film), Mike Murphy, Danny Dietz and Matt Axelson, four members of an elite Navy Seal unit tasked with tracking and capturing (or killing) a Taliban leader in Afghanistan. Based on the real Marcus Luttrell’s 2007 best-selling account of the failed 2005 mission, the movie is at its best when it functions as a procedural in the field and during the firefights. Peter Berg, most recently infamous for 2012’s bloated Battleship (but also responsible for the original Friday Night Lights movie), does a marvelous job staging the meticulous action of a carefully planned military operation. As the men are first dropped off by helicopter and then cross treacherous mountain terrain (beautifully photographed by cinematographer Tobias Schliessler), we’re with them every step of the way, marveling at their professionalism and sense of duty. Additionally, we’re given just enough backstory for each of them that when things start to go wrong, we care about them and *plot spoiler* mourn their loss (the film is called “Lone” Survivor for a reason). As played by Mark Wahlberg (Luttrell), Taylor Kitsch (Murphy), Emile Hirsch (Dietz) and Ben Foster (Axelson), these guys are both ordinary and heroic.

Things do go wrong, unfortunately, when the men – ensconced above the village where their target, Ahmad Shahd, is located – surprise a small group of local goat herders and are forced to make a decision of enormous consequence: should they kill them or let them go? While the moral choice is obvious, letting the goat herders go free will most likely compromise the mission and endanger their own lives. After a brief argument, where they weigh their options, they make the right decision. The die is then cast, after which they do, indeed, suffer the consequences.

What follows is one of the most gruesome and visceral combat sequences I have ever seen on film, and a masterful – if extremely bloody – textbook on what it’s like to be in the middle of a gunfight (not that I’ve ever been in one). We feel every bullet that hits their bodies, and every broken bone and loss of sense. War is brutal, especially when you’re in one.

Where the film is less successful is in its last sequence, after Luttrell stumbles down from the mountain and takes refuge in the very same village from which the goat herders came. Almost as if the director were aware of the pitfalls of one-dimensional portrayals of the enemy, he tries a little too hard and too clumsily to make up for it with the equally simplistic positive Afghan saviors who come to Luttrell’s rescue. The rousing patriotic music at the end doesn’t help, either. Again, over-the-top touches always, to my mind, trivialize the real hardships of battle. As does one of the final moments when Luttrell – back at base – is strapped to a medical gurney as the EKG monitor goes flat, then beats again (really? Berg wants to go out on that cliché?). Still, when we see, over the credits, photos of the real villager who saved Luttrell, those images are very effective, as are the many photos of the actual Navy Seals who died in battle.

So, if you can tune out the Hollywood action-film swagger and focus on the combat, you’ll probably find the film extremely powerful. If you let yourself get distracted by some of the music and crude attempts to rouse your patriotic fervor, you’ll leave the theater annoyed. I think the film is well worth watching – perhaps this year’s Black Hawk Down – so I hope you’re successful in the former effort.