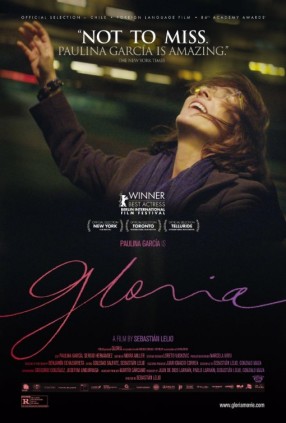 In the astonishing and powerful new film by Chilean director Sebastián Lelio, the luminous Paulina García – who won the Best Actress award at the 2013 Berlin Film Festival – plays the title character, a middle-aged divorcée on the lookout for romance and meaningful experiences. A devoted mother of adult children, Gloria lives alone, but has an active enough social life that involves married friends, her family, and the men she meets on her frequent trips to a local dance hall for older singles. She’s charming, but lonely (her divorce was over 10 years ago), and when she meets Rodolfo, a 60ish divorced man, she falls hard for him, and he for her. Unfortunately, Rodolfo proves to be less than he appears, and for the rest of the film Gloria must struggle to determine what is more important: her dignity and sense of self, or her fear of being alone. The final scene of the film – *spoiler alert* – shows her in the middle of a crowd at a friend’s wedding, dancing again, if alone, head raised high (as it is in the poster), her choice clear. She will be her own woman, come what may.

The movie may run 20 minutes longer than it should, but it’s still well worth watching. Not since the Brazilian documentary O Amor Natural have I seen a film that so vibrantly celebrates the sexuality of people over 20. García bares more than her soul: she and her male co-star bare their bodies, too, and copulate with abandon. It’s a shame that such scenes are a rarity in cinema – where toned bodies equal sex appeal, and everyone else can forget about desire – yet it’s a fact that anyone over a certain age (OK – any woman over a certain age) will have a hard time finding someone who looks like them presented as an object of desire.

Yet the film is about much more than sex. It’s about celebrating life, and making the decisions that suit you best. Last year’s Oscar-nominated No, about the anti-Pinochet referendum of the 1980s – showed us Chileans exercising their right to choose their leader. Gloria shows us one Chilean woman exercising her right to choose her own path.