[Missed the show? Here’s the link to the podcast: http://wypr.org/post/midday-film-2] 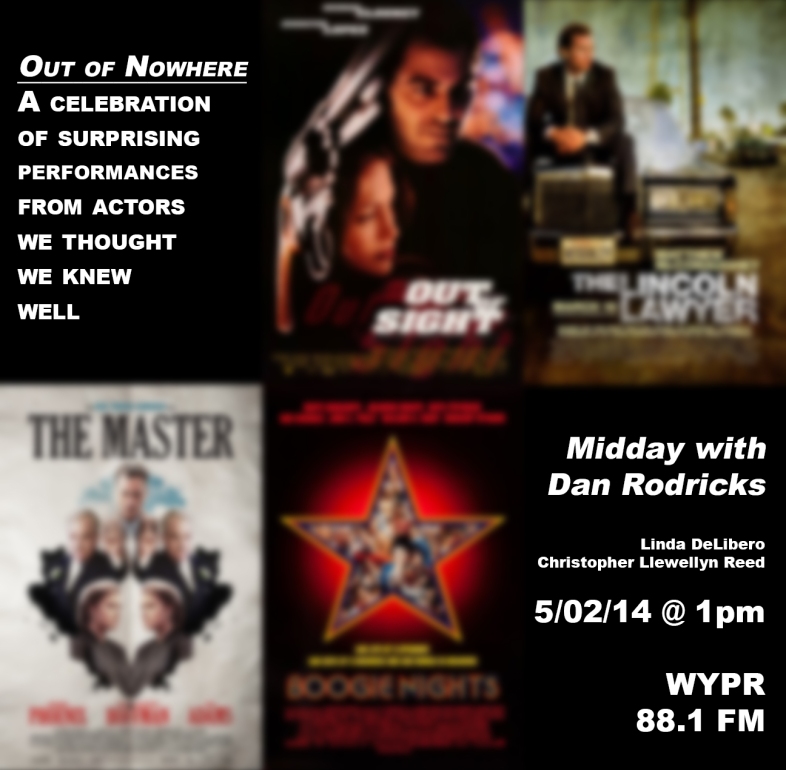 Have you ever watched a film where an actor you had written off as mediocre suddenly surprised you with a brilliant – or, at least, somewhat committed – performance? Or have you gone back and watched an older film with an actor who is now just going through the paces of earning a paycheck, and seen what s/he was like at the start, and been wowed? Maybe you’ve even just been (pleasantly) shocked when a star who was known for comedy suddenly took on a dramatic role (or vice versa), and did well. If you’ve experienced any of these sensations, then get ready for our next Midday on Film show, when we’ll celebrate these kinds of thespian revelations.

Join us, then, on Friday, May 2, at 1pm, on WYPR (88.1FM), on the Midday with Dan Rodricks show, when Linda DeLibero – Director, Film and Media Studies, Johns Hopkins University – and Christopher Llewellyn Reed (that’s me) – Chair and Professor, Department of Film/Video, Stevenson University – will discuss, along with our host, Dan Rodricks, our (very subjective) choices of interesting shockers. These days, everyone thinks of Matthew McConaughey, who rescued his career from romcom hell and now just won an Oscar for Dallas Buyers Club. I first noticed that something was different about him with the 2011 thriller The Lincoln Lawyer. Other contenders for actors who have risen above their beginnings might include George Clooney, Amy Adams and Mark Wahlberg. Jennifer Lopez is my contender for someone who started strong and only then slipped into mediocrity.