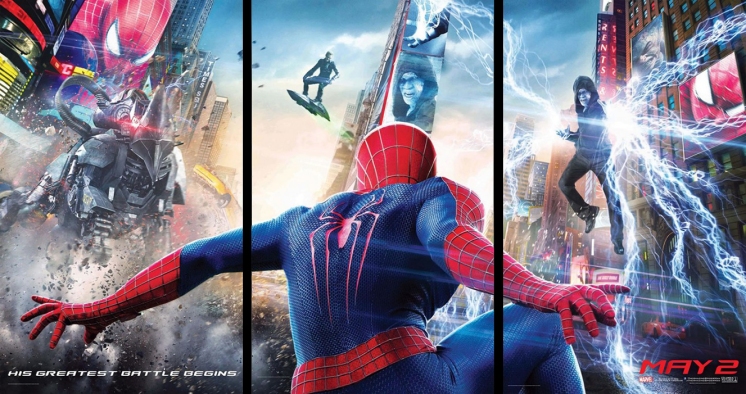 Back in 2012, when I began simultaneously reviewing films on this blog and on WYPR, one of the first films I critiques was The Amazing Spider-Man. I liked it a lot. Here is my (slightly adapted from original posting) take on that first entry into the rebooted series:

Spider-Man, directed by Sam Raimi and released just 10 years ago, in 2002, was a very good superhero origin movie. Unlike Ang Lee’s disastrous 2003 Hulk, Spider-Man did good business and got good reviews. Starring Tobey Maguire and Kirsten Dunst, two actors still not past their youthful prime – even today – the film launched a series that continued (successfully) through Spider-Man 3, released in 2007.

I understood why the owners of the Marvel-Universe rights wanted to reboot the Hulk franchise after Ang Lee’s effort (and 2008’s The Incredible Hulk was actually a pretty good film), but I was completely flabbergasted when I heard about The Amazing Spider-Man. Why, I asked? Why not just pick up where Spider-Man 3 left off, much as the James Bond franchise does when it continues its own series with new actors? Did we really need – just 10 years later – a reboot with new actors?

Well, I’m still not sure we needed this new film, but it’s pretty damn good. I was surprised. After seeing Andrew Garfield in The Social Network and Never Let Me Go, I knew he had some decent range, but I was not prepared for how good he is as Peter Parker. I knew from a variety of films that Emma Stone was charming, lovely and funny, but I did not expect to like her as Peter’s love interest Gwen as much as I did. What really makes the film work, though, is an extremely smart script, which is surprising, since the number of credited writers (3 for screenplay and 1 for story) make it seem like it should be the usual failed “franken-script” that we often see in big budget disasters.

But this story works. The plot is tighter, and Peter Parker speaks in wisecracks, as he does in the original comic books. I also loved the fact that Parker’s web does not come out of his body (a ridiculous conceit that should NEVER have made it into the original film), but is a product of scientific tinkering. I once read one of those “Stupid Movie Science” books that pointed out how quickly Parker’s body mass would shrink as he put out as much silk as he needs to swing through the city. Can you imagine that? We need these movies to be scientifically sound, after all … ha!

So – my conclusion is that this is actually a better movie than Sam Raimi’s Spider-Man, and Garfield and Stone are much more enjoyable to watch than Maguire and Dunst. Rhys Ifans as the ill-fated bad guy and Denis Leary as the police captain are both excellent, as well. The film falls prey to the usual overblown, over-long effects-laden battle sequence at the end, and I’m still not sure we needed a new film, even as good as this one is, but it’s pretty entertaining stuff.

Why quote the entire review here? Because, as much as I enjoyed The Amazing Spider-Man 2, it is not nearly as good as the first film. Garfield and Stone – a real-life couple off-screen – are still delightful and charming as Peter Parker and Gwen Stacy, and the 3-D web-swinging and other action sequences are “amazing” to behold. But the plot is now just a little too complicated to make a truly compelling story. Instead of one villain, we get two. We also get an elaborate back-story that is extremely heavy on coincidence, which is not my favorite plot contrivance. Spider-Man still makes wisecracks and still has spunk, but some of the freshness has left the series. Perhaps it’s time for another reboot . . .

To summarize as briefly as possible: Peter and Gwen – both played by actors clearly in their mid- to late-twenties – graduate high school (following a wonderfully engaging and adrenaline-packed opening sequence), and drift apart after Peter refuses to break his promise to Gwen’s father (who died at the end of the first movie) to stay away from Gwen (to keep her safe). She pursues a successful college career, while he makes a meager living selling freelance photographs to The Daily Bugle and lives at home with his Aunt May (Sally Field, quite good). Meanwhile, back at Oscorp, source of the genetically mutated spider that originally bit Peter, a socially inept engineer, Max (Jamie Foxx, giving a performance remarkably lacking in any kind of subtlety), falls into a giant vat filled with electric eels, only to emerge as “Electro,” an angry man who can control the city’s entire electric grid. At the same time, Harry Osborne (Dane DeHaan, unfortunately following Jamie Foxx’s lead), son of Oscorp’s newly deceased founder, and a childhood pal of Peter’s, returns to run the company (and to find a cure for a congenital degenerative disorder passed on to him by his father).

Mayhem ensues, some of it highly entertaining. This is, in fact, one of those rare films where I actually prefer the action scenes to the plot development (Gravity was another one). There are just too many characters for us to involve ourselves emotionally in any one of them. That, and a certain annoying coincidental plot detail involving Peter’s father’s DNA, kept me from being wholly engaged with the film. But I had a good time, all things considered, and I recommend you see it in 3D and in a theater, rather than at home. Welcome to the summer season, folks!