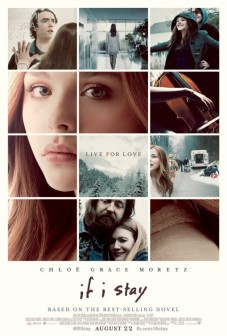 What a week! The two films screened for press were this and When the Game Stands Tall, neither of which impressed. The only way this movie looks good is by that comparison, sadly. Based on the best-selling young adult book of the same title by Gayle Forman, If I Stay comes with a built-in opening-weekend audience. I have not read the book, nor am I of the target demographic, so all I have to go on is the feeling of dread and nausea that spread over me with each passing minute of screen time. Who would die? Who would cry? Oh me, oh my!

Right away the film had problems. Its lead, Chloë Grace Moretz, so good – and, most importantly, natural – in Kick-Ass and Let Me In, here seems to have developed a severe case of “acting.” She telegraphs every emotion to the audience with head shakes, nose flares and dilating pupils. It’s unfortunate, as Ms. Moretz is a very likable presence, even if she has no chemistry with her onscreen co-star, Jamie Blackley (We Are the Freaks). Perhaps we can simply chalk up this and Carrie to growing pains. I hope so. Her talent lies (or lay, anyway) in effortlessly revealing the strangeness below the surface of normality. When we see her exertions, however, it’s painful.

If I Stay tells the story of how Mia (Moretz), a talented young cellist in a family of former punk rockers, gets into a car accident, suffers severe head injuries and almost dies. For most of the film, she lies in a coma, remembering her life (via flashbacks) and deciding whether or not to leave it behind and head into the white light of the beyond. While her body is trapped in the hospital bed, her conscious mind wanders the floors of the hospital, which is how she is able to discover the fate of the family members who were with her in the car (hint: theirs is not a happy fate). As tragedy is layered upon tragedy and Mia feels less and less inclined to fight for her own life, a certain emotional numbness sets in. Who else will die? How far will the filmmakers go to make Mia’s case as dire as possible? It’s tragi-porn at its most extreme.

But just when you thought all was lost, along comes Adam (Blackley), the love of Mia’s (extremely young) life. Will his affections make up for Mia’s loss? Will the song he writes for her bring her back from the brink? Speaking of Adam’s music – he’s a rocker, like Mia’s parents – I found his supposedly brilliant songs (the ones that get him an awesome record deal) rather conventional, and more pop than rock. But music was the least of my complaints. What was more annoying was seeing Mireille Enos – so terrific in AMC’s (and now Netflix’s) “The Killing” – reduced, yet again, to playing the mother role in a feature film (as she did in last year’s World War Z). Give the woman a role worthy of her!

I stayed till the end, but kept on saying to myself, “If I leave . . .” Unless you’re a diehard fan of the source text, I’d leave the movie for someone else to see.