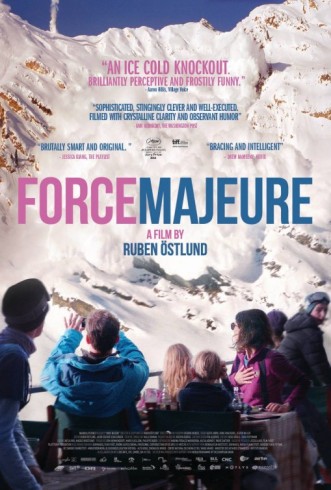 In Force Majeure, a Swedish film (originally entitled “Turist“) by Ruben Östlund (Play), a family – seemingly happy together – on vacation at a ski resort (the gorgeous Les Arcs, in the Savoie region of Alpine France) faces one (natural) disaster that then leads to another, more serious (familial) one. After an avalanche comes dangerously close to the outdoor restaurant where they are lunching, the father bolts as the snow rushes upon them, leaving the mother to frantically protect her two kids. After that, nothing is the same. As a meditation on manhood, heroism and gender roles, the film is a masterpiece.

I knew none of the actors beforehand, but both Johannes Kuhnke – as Tomas, the father – and Lisa Loven Kongsli – as Ebba, the mother, are brilliant. We believe both their early easy physical intimacy and later dissolution. For Ebba cannot forgive Tomas for running; or, rather, she can’t forgive him for not owning up to his behavior. As their children (real-life siblings Clara and Vincent Wettergren, each equally terrific) look on helplessly, Tomas and Ebba intermittently argue and avoid each other.

But this is also a wonderfully funny film. In fact, it’s one of the funniest films I’ve seen all year: a true “dramedy.” Both Tomas’s narcissism and Ebba’s never-ending amazement at that narcissism, coupled with their unrecognized sense of entitlement (only the wealthy can afford Les Arcs), make for wonderfully biting comedy. As do their interactions with other guests at the resort, including Tomas’s good friend Mats – played by the wonderfully charismatic (what a great big red beard!) Kristofer Hivju (Tormund Giantsbane on Game of Thrones) – and his 20-year-old girlfriend Fanny (the charming Fanni Metelius). Mats, especially, tries to help Tomas justify his selfish behavior through a verbal jujitsu that just makes it worse (and leads to his own subsequent problems with Fanny). There is no way out except through confession. Which turns out to not be true at all, since Tomas manages to suffer his breakdown in the most self-pitying, self-centered way imaginable. By the time the film ends (in a spectacularly inconclusive fashion), we sense that the marriage is over, even while Tomas – his guilt off his chest – seems revived. Ebba knows better, as do we. It’s Tomas’s refusal to do more than just admit to cowardice – his refusal to change in any substantive way – that spells doom. It’s a perfect portrait of how and why relationships can go wrong.