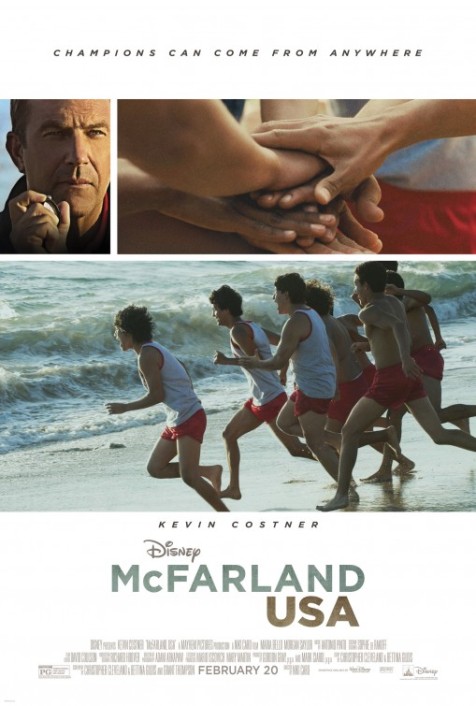 While the inspirational coach film is hardly the most recurrent of genres, it has nevertheless produced enough popular and enduring films to stick in our minds as, well, a genre (or at least a sub-genre of the “sports movie”). Think of films like Knute Rockne All American, Hoosiers and Remember the Titans – to name but three – and you’ll know the main components: a tough, exacting coach; a sometimes ragtag group of young men (Bend It Like Beckham brings in women) in need of direction; a stronger, usually better-funded, adversary; outside forces (recalcitrant parents, illness, prejudice) that conspire against everyone’s best efforts (Dead Poets Society essentially fits into this genre, only it uses drama, rather than sports). In the end, whether or not the team triumphs, all participants in the events will have learned valuable life lessons. The best of these movies – which can, if not careful, come a little too close to maudlin sentimentality for my taste – inspire the audience as much as the coach inspires the team, and do what cinema does best: briefly transport us to a higher plane of consciousness through their well-crafted catharses.

Now we have a new such film, McFarland, USA, from director Niki Caro (Whale Rider, North Country). Starring Kevin Costner (25 years past his heyday) – who, with both this and the recent Black or White, seems to be announcing a career resurgence (a Costneraissance, perhaps?) – as the coach, the movie is set in 1987 in California’s Central Valley, in the eponymous town of the title. It is to this scorching and inland outback, mostly inhabited by ethnically Mexican fruit pickers – some of them migrant laborers, some of them new (and newly proud) landowners – that Jim White (Costner) brings his family (a wife and two daughters) after he is fired – yet again – from a previous high-school coaching job. It’s a rough transition from Boise, Idaho, where the movie begins, and the Whites pretty clearly want to get out as soon as they get in. But Jim White knows this is his last chance, and so tries to make it work.

Soon, Coach “Blanco” (as his students call him) notices that the football-playing kids in his charge are far more suited to running trails than running plays, and this revelation conveniently comes to him just as California announces new funding for high-school cross-country programs (the screenwriter freely admits that he compressed the facts of the true story on which the movie is based for a stronger dramatic punch). With the reluctant acquiescence of the principal (and the students), White manages to recruit the requisite seven members of the team, and soon both he, the students, and the movie, are off and running. As a poor school without resources, the kids of McFarland will have to face off against elite private schools throughout the state, though what they have going for them is grit, drive and the need to prove to everyone that they are better than how the world sees them. Will they win the state championship? Have you seen these kinds of movies before … ?

What makes McFarland, USA work is the rich texture of the town and it’s inhabitants, and how Caro and screenwriter Grant Thompson structure the narrative to emphasize how White is as much in need of inspiration as his students. These kids – played, wonderfully, by a cast of relative unknowns and first-timers – don’t even see “Blanco” as a savior. They mostly come from supportive – and extremely hard-working – families, and though they are destined to work in the fields as their parents do, these are not troubled teens (with the caveat that all teens are, by their very nature, “troubled”). Almost everyone in this film – with the exception of Maria Bello (A History of Violence), wasted as Mrs. White in an underwritten part – feels three-dimensional and acts with personal agency. When the movie ends and we meet the real-life White, together with the students he coached, over the credits, and learn how the depicted events affected all of them, the sentiment of the moment feels genuinely earned (though I do wish that Caro were not so determined to underline her big beats with the sometimes overpowering musical score).

It’s great to find Costner working so hard again. Maybe it’s finally time to forget the debacle of his mid-1990s missteps (Waterworld, The Postman) and remember the finer work of the 1980s (The Untouchables, Bull Durham). His features are still ruggedly handsome, and he’s still as good as ever at portraying resolute men. Now, however, with the wisdom of the added years, he’s also willing to play the flaws, which is what makes him such a pleasure to watch. See the film for him, the amazing supporting cast, and for Caro’s gentle, yet purposeful, direction.