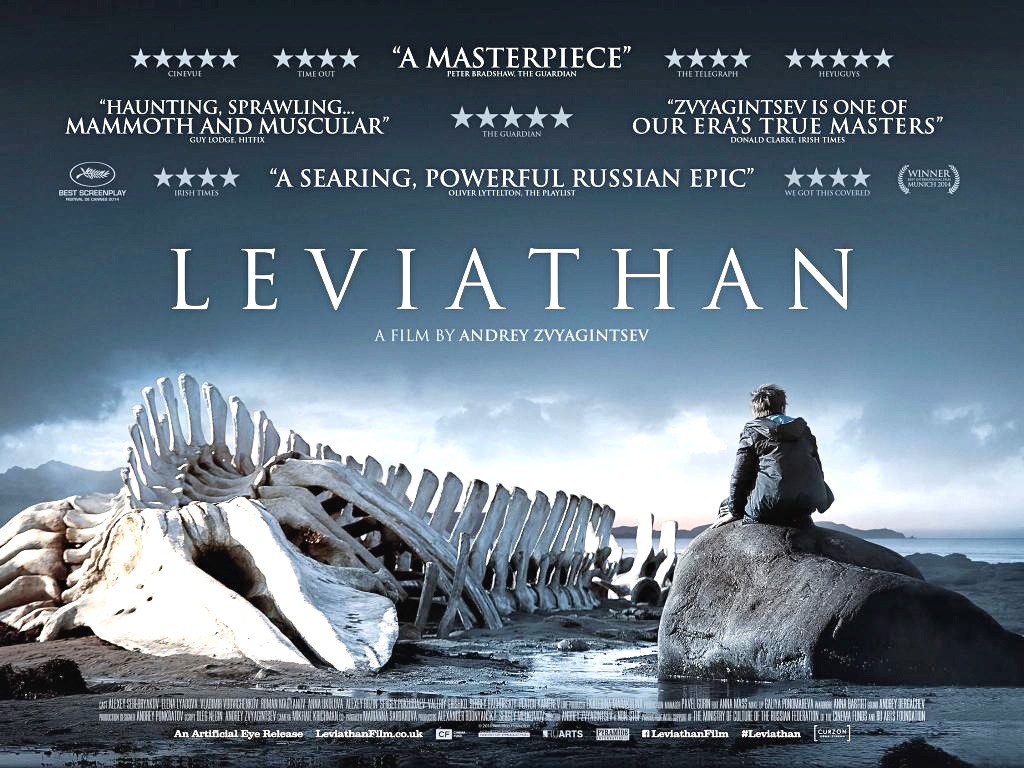 The landscape is beautiful, but cold. Sky, earth and water converge in a steel-like mix of blue and grey, and at their juncture lie the bones, exposed. The skeletal remains of ships and whales intermingle in the sands of time. This is where the bodies are buried, though the graves are open, exposed. There is grandeur in the acceptance of the inevitable. Best get on with it.

So opens the magnificent new film from Russian director Andrey Zvyagintsev (The Return), the camera slowly revealing the barren majesty of a northern outpost. The movie ends, over two hours later, with almost the same exact sequence of shots, in a visual coda redolent of futility. What purpose has been served by the actions of the petty human characters at the center of the drama?

The plot of Leviathan is simple enough. Kolya (Aleksey Serebryakov, unknown outside of Russian-language films), a middle-aged father with a younger second wife, has the misfortune to live on land coveted by the local mayor. Unwisely, he has refused to accept the verdict of the local court – turning said property over to this politician – and has appealed, bringing in an old army buddy of his – now a big-city lawyer – for help. This friend, Dima (Vladimir Vdovichenkov, similarly mostly unknown to non-Russian audiences), arrives from Moscow, full of hope for Kolya’s case. Thanks to some seedy connections, he has the dirt on the mayor. If he can only keep Kolya – a hothead – from blowing the case, he might just be able to win the appeal.

Taking as his departure point events that took place in Colorado in 2004, Zvyagintsev uses this seemingly straightforward tale of a land-grab to craft a narrative of political corruption and abuse of power. Is it about Russia today? Well, sure. It’s also about Russia of yesterday (and maybe tomorrow). In one amazing drunken scene, a group of local policemen shoot up portraits of former Soviet leaders, intimating that next up are the current rulers (though it may yet be “too soon,” as one of them says). In another scene, the corrupt mayor confronts Dima while standing beneath a framed photograph of Vladimir Putin. But it’s not only about Russia. As with all great works of art, out of great specificity come universal truths. Zvyagintsev layers his story with rich details of Soviet and Post-Soviet life, but his movie is a parable of what can happen to any one person who decides to battle an entrenched system. David does not always beat Goliath.

Though events do take some serious dramatic turns, the prevailing emotional tone of the film – except when vodka is involved – is one of carefully managed restraint. Always, just below the surface, lurks a violence waiting to erupt and to destroy those in its path, yet it is often hidden beneath a veneer of civilized banter or official courtroom procedure. Zvyagintsev uses very little music on the soundtrack, and what music there is comes from composer Philip Glass, known for his minimalist compositions. The most shocking moments in the film catch us unawares, though the sense of dread throughout is palpable. Zvyagintsev frequently sets us on edge with camera pans away from the action, following one character, while we hear the sounds (sans music) of the other characters off-camera. We know they’re up to something, and it’s dangerous, but we can’t see it.

Serebryakov is wonderful as Kolya, alternately depressed and volatile. Vdovichenkov is equally strong. His Dima has a greater sense of how to play the political game, but is still no match for the venality of the establishment. The heart of the movie, however, lies with the magnificent Elena Lyadova (Zvyagintsev’s Elena), as Kolya’s wife. In her, we see the burdens and disappointments of life in the far north and the hope for something better that, for one brief moment, comes alive, and then dies.

Leviathan was nominated for an Oscar for Best Foreign Language film, but lost to Ida. Both films are masterpieces, so that’s OK with me, but don’t neglect to see Zvyagintsev’s movie just because it didn’t win. It still remains one of the best films of 2014. It opens today at the Charles.