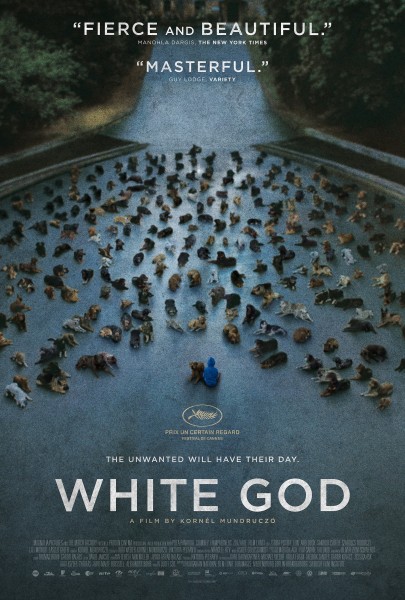 In White God, the animals rise up against their human masters. No, this is not a Hungarian answer to the rebooted (in 2011) Planet of the Apes series. Instead, what we get here is an intriguing (and, especially, intriguingly directed) parable about slave uprisings – or about resisting authoritarian rule, at the very least – with dogs in place of the slaves. I see your Spartacus, and raise you one Fidocus.

13-year-old Lily begins the movie in possession of loved (and loving) mutt named Hagen. But when her mother drops her off with Dad for a spell, it turns out that he – bitter and spent – can’t abide the animal, and soon, in a fit of pique when the dog’s presence causes trouble in his building, he abandons Hagen in the street, locks Lily in the car and drives away. From then we have two parallel stories, as Lily struggles against paternal authority and Hagen struggles to survive: without Hagen, Lily loses her moral compass; without Lily, Hagen loses everything. Before long, Hagen is captured by a dog-fighting ring, renamed Maxie, and pumped full of muscle-building food and drugs to prepare him for the ring. Lily turns away from her music (she’s a trumpeter) and gets involved with drugs of her own.

After his first (victorious) fight, Hagen breaks away from the dog-fighters, but is captured by dog-catchers and thrown into the pound, where his now-vicious manner earns him a spot next-in-line for euthanasia. But just as he’s about to be put down, he grabs the arm of his executioner and yells, “No!” OK, I made that up. But he does fight back, and soon Budapest is overrun with rampant dogs who exact a mean revenge on their former tormentors. Since the film opens with an image of Lily, on her bike, pedaling away from a pack of these canines, we know it’s only a matter of time before she reunites, in some way, with Hagen. Will she be able to stop the carnage before it consumes her?

So, all silliness aside, there is much to recommend in this film. For one, the director has achieved something quite remarkable in his direction of the dogs. In the movie’s official press kit, director Mundruczó (Delta) details how he used over 250 rescue animals, all of whom were found homes at the end of production. The two most amazing of these dogs (with the exception of one scene-stealing Jack Russell), Body and Luke – brothers, from Arizona – play Hagen. Even though I know that much of what we see on screen is a product of smart training and even smarter editing, it is still amazing to see how natural and believable these canine performances can be. Except in the chasing scenes, where, to be honest, it looks like the dogs are just having a great time running through the streets (I bet it was fun!), the interactions between animals and animals, animals and humans, is perfectly staged. My hats off to the team.

Does it work as a parable? Yes and no. There is no question – with stunning sequences evocative of zombie films like 28 Days Later (those opening deserted streets) and disaster films like Alfred Hitchcock’s The Birds – that the movie has great visual power, especially since it’s set in Budapest, site of the great anti-Soviet Hungarian uprising of 1956. But it’s also rather obvious. We get it. Dogs = slaves. Cute idea. And the title, “White God,” while clever (think of Sam Fuller’s White Dog and European colonial attitudes towards their subjects), adds no great further insight to the topic. So what’s new? Great dog performances. Anything else? Oh, music cures the savage beast, too.

Speaking of those amazing, lovable mutts … have no fear. There is a huge disclaimer before the film begins, stating that, no, no animals were harmed during the filming of the movie. So you can sit back and enjoy the spectacle of beasts biting the hands that (once) fed them without worrying about what happened to them, in return.