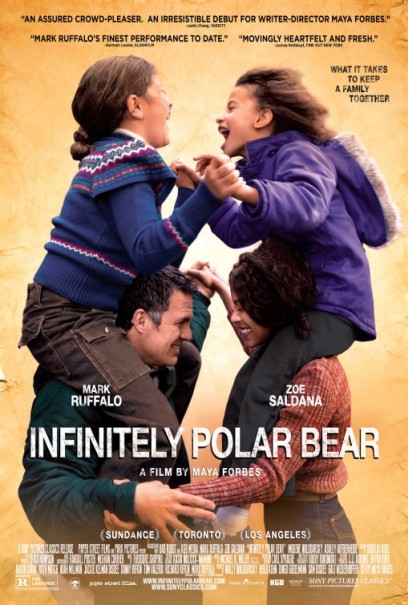 [A quick and full disclosure: Maya Forbes and I not only share a college alma mater, but also graduated in the same year from that institution. That said, I never knew her, though we have at least one friend in common. Until this movie was released, I hadn’t heard her name mentioned since my student days. Now on to my review.]

In Infinitely Polar Bear, first-time director Maya Forbes tells the moving autobiographical tale of her own childhood. Born to a white father and a black mother in 1968, Forbes – at least according to this film – was not particularly perplexed by any issues of biracial identity. Rather, the big challenge for her, her younger sister and her mother was dealing with poverty and her father’s mental illness. Dad was diagnosed with manic depression (now called bipolar disorder) in 1967, but his symptoms didn’t become severely problematic until 1978 (again, according to the film). That’s where our story begins.

Mark Ruffalo (Foxcatcher) plays Cameron Stuart (in real life a member of the Boston Brahmin Forbes family), whose family money is tied up in a trust managed by his great-grandmother, who decides, on her own, and often haphazardly, when and how (and how much) and to whom to give funds. Before the start of the main story, we see, in footage made to look like old home movies, his meeting with Maggie, played by Zoe Saldana (Guardians of the Galaxy). They marry, have two daughters, and then his breakdowns become more severe. As the movie gets truly underway, Cameron (Cam) has taken the girls out of school for an afternoon and is running around in a bathing suit by a lake in the middle of the winter. He is institutionalized, and then, with the help of medicine and treatment, slowly starts the slow journey back to some semblance of normalcy (and fatherhood), if that is even possible. His kids and wife still love him, but they can’t really live with him.

Except that without any income from Cam, Maggie has trouble staying afloat. They don’t live in the right neighborhood for the good public school, and both parents fret about the future prospects for their kids if they aren’t properly educated. Maggie – smart and capable – applies to business school, and is accepted to Columbia on scholarship. The only problem is that Columbia is in New York, and the only housing she can afford is a one-room sublet. So, since Cam seems to have improved (somewhat), the parents strike a reluctant deal. Cam will move back into the family apartment to supervise the girls, and Maggie will head to New York to earn the MBA that will give her and her family a shot at a better life (in real life, Peggy Woodford Forbes did exactly what she does in the film, and, according to her official bio, became “the first African American woman to establish a registered investment advisory firm in growth equity management in the United States”), with plans to come back to Boston on the weekends. The stage is set for a very interesting family drama, or comedy (much of it is funny), or both.

At first, the film feels scattered, much like Cam’s brain. With bits and pieces of scenes strewn like random memories, the narrative lacks coherence. But then, slowly, the story gathers momentum, and then Forbes’s earlier aesthetic choices make more sense. Although she puts the two girls front and center, this is most definitely Cam’s story, and we need to follow his own journey as he struggles to figure out how to adapt to a world of occasional incoherence. The seeming mess of the opening leads to the more structured middle, which leads, in turn, to the perfect ending. As we watch Cam and Maggie struggle to raise a family, and watch Maggie fight to achieve her laudable goals, and watch Cam do his best to not go off the rails, and all the while watch the girls grow up with a father who is as much a child as them, and a mother who is so frequently absent, we become increasingly involved in their lives, and wish them success.

Going back to the issue of race, it’s actually surprising and quite refreshing that it is treated so incidentally here. Given the time period – the Supreme Court’s “Loving vs. Virginia” decision outlawing bans on interracial marriage had come in 1967 – it’s amazing that there are only two mentions of race (that I caught) in the entire film. One happens when the older daughter (the director’s surrogate) wonders why she doesn’t look black, and the other occurs when Maggie, frustrated that her plans may not work, bemoans to Cam how the world views poor whites much differently than poor blacks. And that’s it. If for nothing else (and there is so much more), the movie is remarkable in how simply and without drama it shows a black woman and a white man raising a family in America in the 1970s.

The four lead actors help to propel the film forward, even through the occasional moments when the script falters and becomes a little too expositional. Ruffalo is terrific in the showy part, but it’s Saldana who is the emotional heart of the film in the vital, but less flashy, role of Maggie. The girls, however, shoulder much of the film’s narrative weight, and they are more than up to the challenge. Newcomer Imogene Wolodarsky – who just happens to be the director’s daughter (her father is also the film’s producer) – plays Amelia, the eldest, and novice though she may be, she shines. Ashley Aufderheide – another relative beginner – plays Faith (who, in real life, grew up to be China Forbes, the lead singer of Pink Martini), the younger daughter, and she is similarly wonderful. In fact, both girls, together, give two of the finest child performances I have seen in a long time, natural and without seeming artifice.

The film is far from perfect. There are those awkward bits where too much is said by characters for the sole purpose of explaining the backstory. And then there’s the unfortunate title, which may not help the movie garner the audience it deserves, since it seems to suggest a very different kind of children’s story. But otherwise, there is so much to admire and respect and enjoy about Infinitely Polar Bear that its occasional flaws recede into the background, leaving, in foreground, a sweet and powerful tale of love and perseverance and resilience. I look forward to Ms. Forbes’ next film.