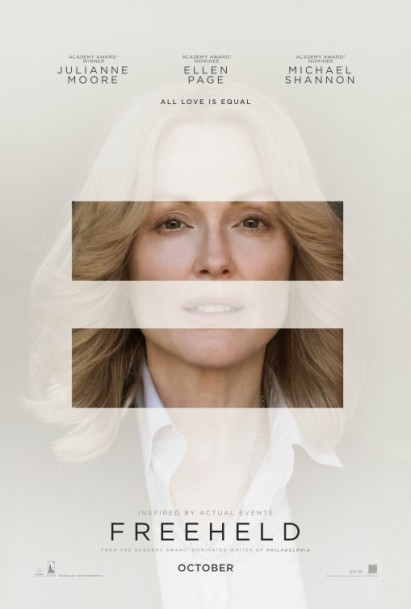 I have met Peter Sollett a few times, and had him Skype with my students once. He is a very nice man. I am a big fan of his Award-winning short film Five Feet High and Rising, from 2000, and his debut feature, Raising Victor Vargas, which he adapted from that source in 2002. He has not been the most prolific of directors, but his 2008 Nick and Norah’s Infinite Playlist was enjoyable enough and showed a periodic flash of cinematic wit, holding out hope of potential treasures to come. Though Mr. Sollett has directed the occasional TV episode since then, Freeheld is his first feature in seven years. I wish I could announce that it had been worth the wait. Sadly, it contains little of the verve or grit of the director’s earlier work; instead, it is generic enough in tone that one can’t help wonder what happened. Who is responsible for this well-intentioned – but ultimately bland – exercise in middlebrow storytelling? With a script by Ron Nyswaner (Oscar-nominated for Philadelphia), it should be a lot better than it is. Instead, it’s a Lifetime movie with all of its hard edges scrubbed off.

Julianne Moore (Still Alice) plays Laurel Hester, a real-life New Jersey policewoman who, when diagnosed with cancer in 2005, tried to assign her county pension to her female domestic partner. Though New Jersey had just recently passed the Domestic Partnership Act, the Ocean County Freeholders (like a town council) denied Hester’s request, setting off a legal battle that presaged our current age – just 10 years later – of strife over gay marriage. Ellen Page (Inception) plays Stacie Andree, Hester’s girlfriend. Both women are fine, though better earlier in the film than later, when they are each required to emote on cue, tears streaming down their faces as we marvel over how a film about something so important can feel so denuded of real drama. Why is that? Because everyone else is so broadly caricatured. We know who will do what, and when, and there are no surprises.

The broadest caricature of all belongs to Steve Carell, a man who singlehandedly ruins this film as he did Foxcatcher (Oscar nomination notwithstanding). As Steven Goldstein, a self-proclaimed loud and proud gay activist, he is just that: loud. Barreling into a movie in which a woman is dying of cancer, Carell does Michael Scott on steroids. I loved him in “The Office,” where his manic self-regard made sense, and I’m all for leavening tragedy with comedy – or comedy with tragedy (Charlie Chaplin‘s stock in trade) – but here, it just feels like Sollett lost control of his actor. It’s too bad, as the facts of the case deserve telling. Fortunately, there is a 2007 documentary, of the same title, that pays due homage to Hester, Andree and their supporters. Watch that one, sit this one out, and hope that Sollett one day regains his mojo.