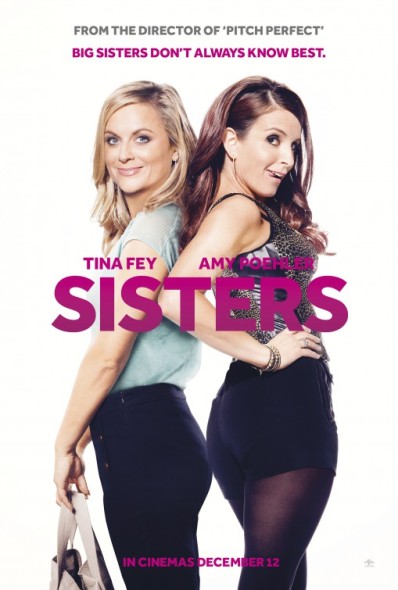 With my deepest apologies to Eurythmics and Aretha Franklin, but Sisters, the new film from Jason Moore (Pitch Perfect) – starring frequent partners Tina Fey (“30 Rock“) and Amy Poehler (“Parks and Recreation“) – exists as a vehicle for the two veteran comic performers to get together and hang out with their friends: in other words, they’re doin’ it for themselves. If you enjoy these (usually) fine and entertaining actresses no matter what they do, then there’s a good chance you will find plenty to love in their present collaboration. If you like a (somewhat) coherent narrative to go along with your mayhem, and want even familiar faces to offer more than just the comfort of their familiarity, then you may tune out as you watch or, worse (like me), begin to loathe every second of the experience. At nearly two hours, it is certainly not a short comedy, so you’d better hope you really like Tina and Amy.

The story, such as it is, revolves around two sisters – Kate (Fey), the elder, and Maura (Poehler) – who find themselves back in their childhood home, on the eve of its being sold by their parents, and decide to throw one last party. To explain why these two 40-somethings would want to behave so recklessly requires more effort than the movie deserves, so l’ll stop there. Expect to find alums from “Saturday Night Live” – one of the many shows where Fey and Poehler have previously worked – including Maya Rudolph (Bridesmaids), Rachel Dratch (Spring Breakdown), Bobby Moynihan (Adult Beginners) and John Lutz (Sleepwalk with Me). Expect other recognizable comedic supporting players like Samantha Bee (“The Daily Show“), Ike Barinholtz (“The Mindy Project“) and John Cena (Trainwreck). It’s nice that James Brolin (The Reagans), Dianne Wiest (Hannah and Her Sisters) and John Leguizamo (John Wick) show up, too, but their talents are largely wasted, so it doesn’t matter. It’s not that working with the same people over and over again is a bad thing – in the old Hollywood studio system, that happened all the time, and the comedies of Preston Sturges, to name just one director, are filled with the same repeating cast – it’s that there is a danger that your friends may not push you to make something interesting.

That, unfortunately, is very much the case here. As the party goes from bad to worse, the jokes and performances are pushed to the limits of stupidity. And then, as so often happens in these kinds of movies, everyone reconciles at the end in scenes of unearned sentimentality. I like dumb comedies as much as the next person, but most successful dumb comedies are actually pretty smart in how they dish out the craziness. And when will Hollywood stop with the offensive stereotyping of non-white/non-American characters? In this film, it’s Koreans who come in for caricature. I normally enjoy the two leads, but wanted out of this mess within 20 minutes. See it if you really must, but I suspect you’ll be at Star Wars: The Force Awakens, instead. Good call.