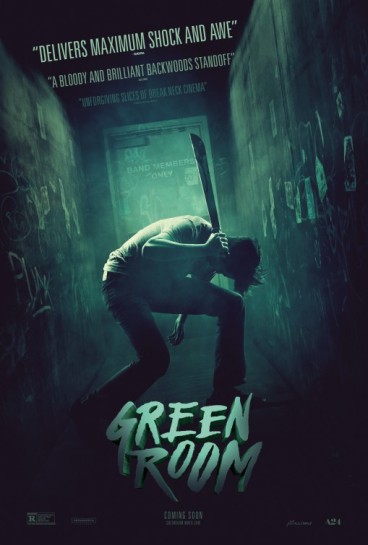 If you like horror films that embrace their gore with viscous close-ups, yet also long for the blood to flow from a well-scripted set-up where consequences follow initial actions, then Green Room is the film for you. From director Jeremy Saulnier (Blue Ruin) – formerly a cinematographer (Putty Hill, Septien) – the movie is meticulously shot and acted, as fine a piece of cinematic craftsmanship as there is. Still, by the end of its 90 minutes, I couldn’t shake the feeling that, for all of its flourishes, it doesn’t quite rise above the limitations of its genre. With a stellar cast, headlined by Patrick Stewart (Star Trek: The Next Generation) and including Imogen Poots (Need for Speed), Alia Shawkat (Pee-wee’s Big Holiday) and Anton Yelchin (Only Lovers Left Alive), the carnage is delivered with great dramatic chops, so there’s that. Did I mention that horror is not really my thing?

The four members of an ultra-indie hardcore rock band, on tour in the Pacific Northwest, find themselves strapped for cash and without a gig. We’ve seen them, straight off, syphon gas from cars to make it to their next destination, so we know they’ve only got a canister to piss in. When the DJ in whose pad they’ve crashed – who promised them a concert that never panned out – comes up with a make-up show off somewhere in the woods at a relative’s bar, they jump at it, no matter that it’s for a bunch of skinheads. Money is money, after all. Smartasses that they are, though, they can’t help tweaking the audience with their first song, “Nazi punks, f*** ’em.” Yes, as the trailer promises, there’s trouble ahead.

What follows is a series of reversals, and reversals of reversals, that throw our protagonists into a situation of quickly escalating mayhem. Guns, machetes and dogs are involved, and the effects of each of these weapons on fragile human flesh is shown again and again. Gurgle. Fortunately, even if that bubbling plasma grosses you out, the seeming impossibility of survival for those we root for will hold your interest, since it seems unlikely that not one main character will survive (the question is, will he/she/they survive un-maimed?). When all is done, and the triumphant few remain, Green Room may not be particularly memorable (though, certainly, queasy), but at least it isn’t a bore.