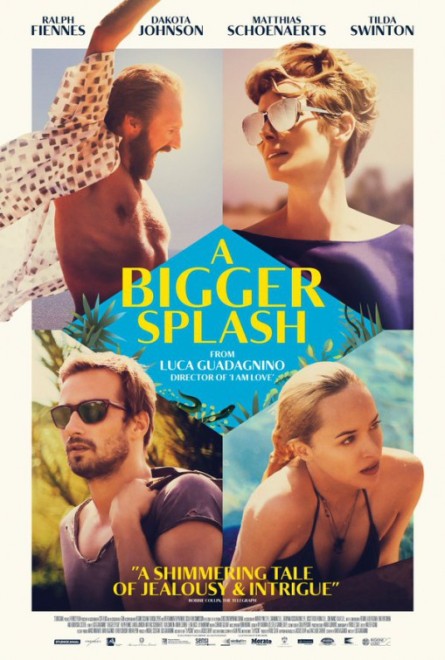 It’s all so interesting … until it isn’t. Italian director Luca Guadagnino, in his first narrative feature since I Am Love, in 2009, has crafted a sumptuously photographed meditation on celebrity, addiction, love and betrayal that, for about two thirds of its 125-minute length, mesmerizes even as its meanders through a minimalist plot. Once tragedy strikes, however, that escalation of stakes only serves to invalidate much of what had come before, reducing it to banal set-up, rather than intricate character study. Based on French director Jacques Deray’s 1969 La piscine, this new film similarly uses a love quadrangle as the emotional backdrop for a larger discussion on the human condition. Unfortunately, not all sides of that square are equally drawn, and so it becomes increasingly hard to invest energy in the outcome.

And yet it all works for quite some time, thanks to a trio of great performances from Tilda Swinton (Only Lovers Left Alive), Ralph Fiennes (The Grand Budapest Hotel) and Matthias Schoenarts (Far from the Madding Crowd). Swinton plays Marianne, a world-famous rock star taking a break as she recovers from a throat operation. Part of that recovery involves naked sunbathing and sexual romps in the pool with her younger lover Paul (Schoenarts), an idyll interrupted when her former lover and producer, Harry (Fiennes), calls from the airplane that is in the process of landing on their vacation island (Pantelleria, off the coast of Sicily). As we will learn in flashbacks, Harry is the one who brought Marianne and Paul together, 6 years prior, when he thought she needed a boost after their own breakup. When he disembarks, he has his daughter Penelope (Dakota Johnson, 50 Shades of Grey) in tow. They’ve only just recently connected, as Penelope – now, apparently, in her early 2os – grew up without knowing the identity of her father. Unfortunately, then, for Marianne and Paul, what had been a peaceful duo is suddenly a crowd, especially since Harry cannot be alone, or quiet. It’s as if a tidal wave just washed away paradise.

Except that Marianne – who is not supposed to speak as she recovers – may enjoy Harry’s manic shenanigans more than she lets on. But what, exactly, is his game? For a while, it’s not entirely clear, but the wonderful rapport between the three leads – and gorgeous location – proves enough of a distraction from the usual demands of story that it’s a delight just to bask in their presence. Fiennes, in particular, holds our attention with his characterization of a funny, sad and incredibly needy megalomaniac, though both Swinton and Schoenarts shine as they provide the necessary oppositional gravitas. Johnson is a bit of a drag, but perhaps her part is underwritten on purpose, to keep us guessing as to her own motivation. On the one hand, we know what (or who) she wants, but beyond that it’s not clear why we should care. And the later, unexpected details revealed about her in the final act do not add appreciably to the interest of her character. Still, despite the mess that is the end, what happens earlier is well worth watching, even if the bloated ending needs saving.