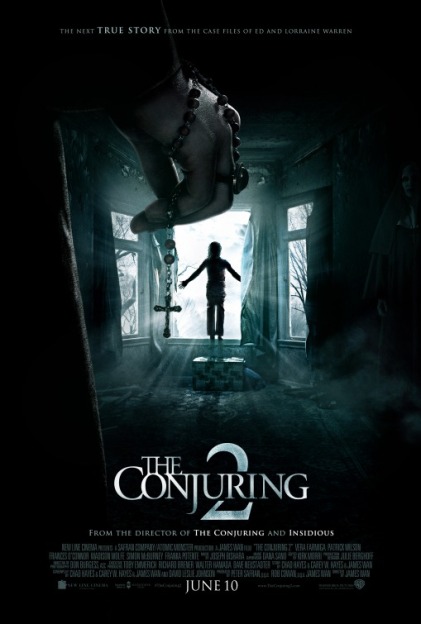 Three years ago, Australian director James Wan (Saw) served up The Conjuring, a somewhat tasty – if also deeply silly – morsel of haunted horrordom, starring Patrick Wilson (Fargo, Season 2), Vera Farmiga (At Middleton) and Lili Taylor (The Cold Lands). On a reported budget of only $20 million, it went on to make over $300 million at the global box office. A year later, we got a prequel, of sorts, about the possessed doll at the center of that first film. Now, we have a proper sequel (money begets a franchise, including a sequel to the prequel, due out in 2017), starring Wilson and Farmiga, again, as Ed and Lorraine Warren, the real-life ghost hunters whose case files serve as the basis for all of these movies. If you believe in the supernatural, then the “based-on-a-true-story” source matters, I guess. If, like me, you believe in no such thing, then all you’re looking for is a thrill-ride. The first film mostly delivered what was expected, though it was far from perfect; this time, it’s mostly the imperfections we notice, though there are some (unintentional?) laughs, as well.

Speaking of source texts, The Conjuring 2 begins with The Amityville Horror – or rather, with the actual house, in Amityville, NY, where the original events that inspired book and movie ostensibly took place. It is 1976, and Ed and Lorraine have been called to investigate that house’s haunting. While there, Lorraine sees, in a self-induced hypnotic trance, a demonic figure who will chase her and her husband for the rest of the movie. For even though the bulk of the story in The Conjuring 2 takes place in England, Wan and his screenwriters are here trying to set up more than just a single new case. The Warrens’ livelihood and very lives are at stake, and so we require this needlessly long prologue before the action can begin. Which is too bad, for though much of the film is risible, with obvious jump scares far too easy to predict, it would all be much more palatable at a shorter length. At 2 hours and 14 minutes, however, the movie long overstays its welcome.

Soon after Amityville, we begin to cut back and forth between the Warrens’ hardships at home – plagued by accusations of charlatanry and visions of evil spirits, both – and the beginnings of a new haunting across the Atlantic, in what looks like a working-class suburb of London. There, the Hodgson family (of five) – led by overwhelmed single mum Peggy (Frances O’Connor, Mr. Selfridge) – must contend not only with a nasty poltergeist, but with the demonic possession of child #2, Janet (an excellent Madison Wolfe, Home Sweet Hell). All looks bleak, until the local clergy becomes involved, and they reach out to the Warrens. Help is on its way.

Director Wan more than knows his way around cameras and atmospheric lighting, and has a fine way with his actors. Wilson and Farmiga are always watchable, and O’Connor more than holds her own. What makes the film far less than its imperfect predecessor is the obviousness of the frights, and the over-the-top obsessive use of Christian iconography. True, most films about possession involve crucifixes and exorcisms – including, but not limited to, William Friedkin’s brilliant 1973 The Exorcist – yet in The Conjuring 2 these religious symbols feel needlessly excessive (a room full of upside down crosses presented as a horrible sight, as an example) and exclusionary. Are there really no other ways to fight off evil than through Christ? In 2016? How you feel about that, as well as how you feel about techniques derived from better movies, will determine how you feel about this movie.