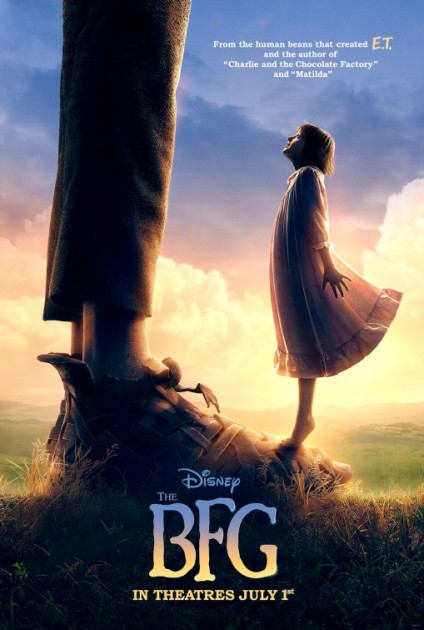 Director Steven Spielberg has long been a purveyor of magical fantasies for the silver screen, a joyful fabulist who also ventures into darker, more adult, dramas, as well. From E.T.  to Schindler’s List, his work truly runs the gamut of cinematic genres. Most recently, last October, he gave us Bridge of Spies, a finely crafted throwback to the paranoid thrillers of the 1970s (though set in the 1960s), in which he used the little-known (in the States) British thespian Mark Rylance (Wolf Hall) to great effect. Now, just 8 months later, both Spielberg and Rylance are back, partnered once more, in an adaptation of author Roald Dahl’s 1982 The BFG.

Full confession: though I generally love Dahl’s work – Charlie and the Chocolate Factory and James and the Giant Peach are my favorites – I do not like this particular source text at all. It tells the story of one orphaned English girl, Sophie, who one night sees a giant through the orphanage window. He then kidnaps her so she won’t tell the world what she’s seen. She soon discovers that, unlike his gigantic brethren, her abductor does not eat humans. He’s the “runt” (as the other giants call him) and prefers to spend his energies catching dreams and delivering them back to other sleepers. He’s nothing but a B(ig) F(riendly) G(iant), in other words. Before long, however, the other denizens of giant country catch a whiff of Sophie, and it may just be a matter of time before they find her. At the same time, they loudly announce their intentions to continue returning to England, night after night, since they have there discovered a treasure trove of delicious children, much like Sophie, for the taking. Sophie insists on stopping them, and convinces the BFG to help her.

So what’s not to like? Why, the BFG, of course. Perhaps I’m just a curmudgeon, but Dahl managed to create one of the most annoying literary creatures of all time, who cannot speak in anything but mangled syntax. That gets old, and quickly. And then there’s the worldview, in which Dahl manages to make clear, intentionally or not, that the most valuable children are the English. The whole affair feels very old-school colonial, which is especially odd given the year of publication.

But what about the movie? Well, I am happy to report that much of what bothered me in the book, ideologically, is gone. Mark Rylance is quite fine as the BFG (at least what we can see of his performance via motion-capture technology), although he is still given far too much gobbledygook dialogue to say by screenwriter Melissa Mathison (E.T.). Newcomer Ruby Barnhill, as Sophie – all real, all the time, as far as I can tell – is both spunky and adorable. The computer-generated universe feels well-designed and is lovely to see. The real attraction for me, however – and the movie truly comes alive when he’s on-screen – is Jemaine Clement (People Places Things) as the Fleshlumpeater. He’s the big bad nasty of a human-chomping giant who serves as the story’s main antagonist. We need more of him.

Because what is not so good about the film is how unforgivably dull it is. So much of the story is dreadfully inert and sluggish, as if Spielberg, that master of the action sequence, forgot how to structure a narrative. I appreciate his desire to dwell on the mystical bond that develops between Sophie and the BFG, but the slow pace is generally not supported by particularly meaningful exchanges. I think it’s quite possible that fans of the book will respond positively to the sight of a beloved character brought to life, but others may just be bored. I certainly was.