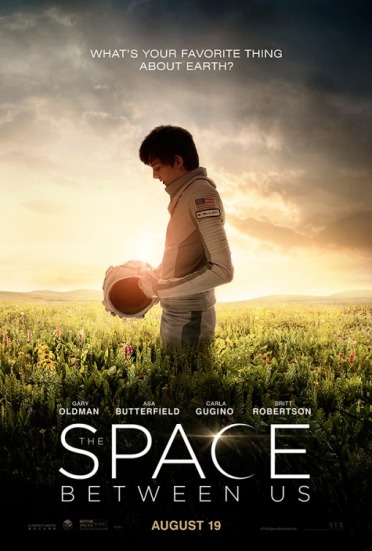 A well-intentioned, but ultimately ridiculous, clumsy and inept film, The Space Between Us tries its darnedest to convince us of the logic behind its narrative, yet finds itself lost in the stratosphere (quite literally) of failed imagination. To boot, the science is ludicrous and the sentiment slathered on in gooey gobs of emotional garbage. It’s a mess, in other words, and really not worth anyone’s time. I suspect the studio behind it is well aware of its problems, since the film’s release date was switched from December to February. This kind of recalibrated positioning can indicate worries about competition and/or quality. Peppered with lines like “courage is fear that has said its prayers,” there’s no question that it’s quality that lies behind the concerns.

I’ll be brief, since I saw the film back in November, and have little memory beyond my intense dislike of it. Asa Butterfield (Ender’s Game) stars as Gardner Elliot, the only human born on Mars. Now 16, his existence is a well-kept secret from the Earth public; he has been raised by a succession of scientists who have made the new Mars colony their home over the years. Why a secret? He’s an embarrassment for one, since his mother somehow made it onto the trip without anyone realizing she was pregnant (NASA is slipping); secondly, no one knows what to do with him, since it is believed that the low gravity on Mars has prevented his body from developing properly, and that a return to Earth could lead to his death. You see, his heart is too big (in every sense of the word, since he is also a sweetie).

But our intrepid hero somehow makes it to our planet, anyway, determined to find his biological father. He enlists the help of a young woman with whom he has been communicating by email (without her knowing his original location), and off the two of them go on an adventure made all the merrier because Gardner knows nothing of our customs, and hence acts like an actual alien (which, I guess, he is). It goes on and on, and everything eventually resolves (including that tricky enlarged heart), but not before many scientific laws are egregiously violated in a way particularly distracting, even for Hollywood. Though everyone is very game – and there are some appealing enough people here, including Gary Oldman (Robocop), Carla Gugino (San Andreas) and Britt Robertson (The Longest Ride) – it all adds up to less than little. Do yourself a favor, and keep some space between yourself and The Space Between Us.