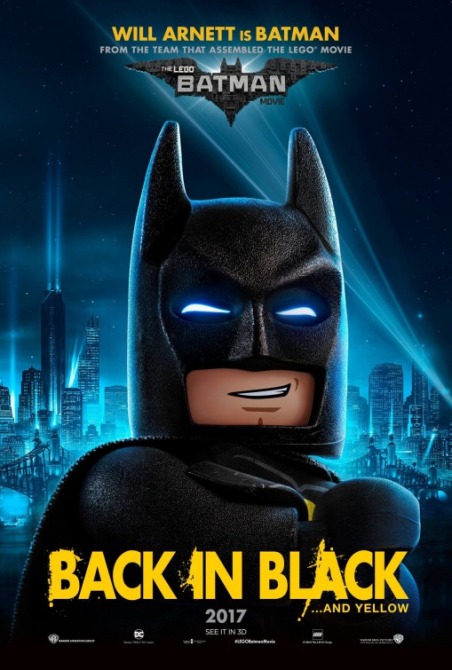 I loved The LEGO Movie, and one of the great snubs of the 2015 Oscar nominations was the omission of that film from the list of contenders for best animated feature. Despite being an obvious advertisement for LEGO® toys, it was a delightfully anarchic riff on all things pop-cultural, its nuttiness grounded in an aspirational tale of the hero’s journey towards self-actualization. It also featured a catchy – nay, infectious! – tune at its center, “Everything Is Awesome” (recipient of the movie’s only recognition from the Academy, though it did not win), which wormed its way into our collective consciousness and just wouldn’t let go, viral melody that it was. As an example of Aristotelian storytelling techniques married to the commercial imperative, The LEGO Movie was a near masterpiece.

And now we have The LEGO Batman Movie, a spinoff featuring one of the characters from the previous film, who himself was a spoof of director Christopher Nolan’s dark vision of the caped crusader, gravelly voice and all. Will Arnett (BoJack Horseman) returns as the voice of the lead, his sincere gravitas lending exquisite humor to the comedy. His Batman is such a do-it-yourself loner that other superheroes shun him, as we see when he inadvertently crashes a Justice League party thrown by his rival, Superman. His dramatic trajectory here forces him to learn, the hard way, that no man is an island or, to quote the actual cliché used more than once, “it takes a village.” We are once more in the land of cultural appropriation in the name of wit, and it mostly works the second time around. If the movie grows occasionally tiresome, it’s because whimsy will only get you so far, and what premise there is grows thin by the end. Still, it’s a fun ride, thanks to Arnett, his game collaborators, and the fine animators behind the visual magic of the picture.

Some of those actor colleagues include Ralph Fiennes (The Grand Budapest Hotel ), as the voice of Alfred, Batman’s long-suffering butler; Rosario Dawson (Cesar Chavez), as Barbara Gordon, Batman’s foil and love interest, both; Michael Cera (Scott Pilgrim vs. the World), as Robin; and Zach Galifianakis (Masterminds) as the Joker, Batman’s mortal enemy (at least as the Joker sees it). They’re a lively bunch, well-supported by director Chris McKay (many episodes of Robot Chicken) and his team. One of the gags of which I could never get enough was the film’s acceptance that this is a LEGO universe: it’s not just that everyone looks like a toy, but that they are able – and willing – to build what they need in times of crisis by assembling various LEGO parts into whole devices. Again, this makes product placement the driving principle of the entire story, yet it is also extremely clever. Never have I so much enjoyed being the target of a marketing campaign.

Depending on your political views – or how much you separate those from your ability to enjoy entertainment – one item may give you cause for pause or joy: the executive producer is Steven Mnuchin, Donald Trump’s pick for Treasury Secretary. His name pops up right away, after the director’s, in the end credits. This is hardly his first Hollywood rodeo – other films he shepherded to the screen, just last year, include Suicide Squad, Sully, The Legend of Tarzan and Central Intelligence – so we’ve all been supporting his movies since his first, which was … The LEGO Movie. Why stop now? However you feel, The LEGO Batman Movie more or less delivers on its own campaign promise to provide escapist pleasures of a cinematic kind, however frivolous they may be. Enjoy.