I will admit to being a big fan of young adult science fiction and fantasy writing. I have been since I was … well … a young adult. I always appreciate the tightness and cleanliness of the plots, unmarred by needless digressions into pseudo-philosophical ramblings or extreme descriptions of violence and/or sex. Such distractions are part of what I sometimes dislike in science fiction and fantasy geared towards adults. Don’t get me wrong: I like sex and, to a much lesser degree, some violent mayhem. But even more, I like storytelling, and when the sex and violence feel gratuitous – just there for the titillation – then I tune out. As far as the attempts at philosophy, I say, unless you’re a Tolstoy or a Wharton, let the story do the work for you, and leave any attempt to layer additional meaning to someone with the ability to do so. There is pride to be had in having the talent to craft a good story, and if it’s good, then whatever greater meaning you hope to say with it should emerge without additional efforts. The good writers of adult sci-fi and fantasy, such as Aldous Huxley, George Orwell and Margaret Atwood, tell their stories directly, as well, yet their novels resonate far beyond a simple breakdown of their plots.

Since this is nominally a film blog, I turn to one of the undisputed intellectuals of the field, who also happens to be a (sometimes) great filmmaker, Jean-Luc Godard. In an interview with the magazine Cahiers du Cinéma in 1962, Godard had this to say about American filmmakers (the Cahiers critics and French New Wave filmmakers had a special place in their hearts and imaginations for American cinema): “The Americans, who are much more stupid when it comes to analysis, instinctively bring off very complex scripts. They also have a gift for the kind of the simplicity which brings depth …” [Jean-Luc Godard, Godard on Godard, ed./trans. Tom Milne (New York: Da Capo Press, 1972), 179]

Godard, though speaking about American filmmakers vs. French filmmakers (and we can forgive him his “Americans are much more stupid” line, right?), describes exactly how I feel about young adult sci-fi vs. adult sci-fi. It is its very simplicity that makes it succeed (when it succeeds). In the right hands, complexity can be good, too, however, as the work of the late great sci-fi author Octavia Butler demonstrates.

I have so far only read the first volume of Suzanne Collins’ The Hunger Games trilogy, but I enjoyed it very much. The premise, though full of a lot of holes (would America really break down in such a way that technology would be so unevenly distributed?), is a great dystopian vision of a future that feels, in our ever-more partisan and economically distressed age, possible in spirit (if not necessarily in the details that Collins imagines). I was a big fan of Collins’ Gregor the Overlander series, and was a latecomer to these new books, yet am already a fan, and look forward to reading the next two in the series as soon as I finish the book I am reading now (interestingly enough, entitled The Hunger Angel, by Herta Müller).

So it was with great and hopeful anticipation that I decided to see the movie adaptation of The Hunger Games, in the middle of the week I spent watching summer movies for my appearance on Midday with Dan Rodricks. The film had been released in March, but was still playing at our local Beltway 6 movie theater, which plays no-longer-first-run movies at reduced prices. I figured that a big-budget high-concept film such as this needed to be seen in a theater. I remembered having read mixed reviews of the movie when it first came out, but I thought, “How bad can it be?” After all, it was directed by Gary Ross (Pleasantville, Seabiscuit), and starred Jennifer Lawrence, a young actress whom I had adored in Winter’s Bone.

Unfortunately, the film not only disappointed me, but it disappointed me in a way that really left me disgusted with the business side of Hollywood. Why give this movie to a man who had no particular aptitude for the genre, rather than, say to Alfonso Cuarón, who, after Y Tu Mamá También, had done such a terrific job with the third Harry Potter film (Harry Potter and the Prisoner of Azkaban)? Or why not even to … <gasp> … a Catherine Hardwicke? True, Twilight and Red Riding Hood had their insipid moments, but Thirteen and Lords of Dogtown showed that she could handle grit and young people in equal measure. Although I am not naïve, and know that production companies often make decisions about expensive projects based on some dull benefit risk analysis equation (such and such a star + such and such a director = big bucks), I can still get steamed when no one seems to be thinking with passion, as well. It is possible to make commercial entertainment that is artistically crafted, as the more interesting blockbusters over the years have shown (Jaws, The Exorcist, The Sting, Raiders of the Lost Ark, The Godfather, Back to the Future, etc., being just some of my favorite examples of films made in my lifetime). Sadly (for me), The Hunger Games made money – a lot of money (over $405,000,000 domestic as of this writing) – putting it in the top 100 of grossers of all time, as you can see by checking out boxofficemojo.com. Which means that I am wrong about the film and the Hollywood machine is right … right?

Here’s my (simple) take on what’s wrong with the movie. The error lies primarily about the casting and direction of the actors. In both Pleasantville and Seabiscuit, I thought Gary Ross had a fine hand with his actors, so I’m not sure why he is unable to make either Jennifer Lawrence or Josh Hutcherson, the two young stars of this film, behave in ways that convey any sense of urgency or fear of death. They give off the affect of teenagers about to go on a contemporary (to our world) reality show, rather than on a scary futuristic gladiatorial combat-to-the-death contest.

I suspect that Gary Ross was just in it for the money (OK, that “suspect” does make me sound naïve – he was in it for the money). He cast the hot young female star of the day, fresh off an Oscar™-nominated performance in Winter’s Bone, and matched her with an up-and-coming young male actor about her age, fresh off a good performance in the Oscar™-nominated film The Kids Are All Right. Did he then just assume it would all work out?

Here is a poster for the film:

So far, so good. Thanks to some manipulation in Photoshop, the girl looks tough, as if she is hungry and has spent many years hunting to feed herself and her family, just as Katniss Everdeen has done in the book.

Now check out these photos taken by the great Dorothea Lange in the 1930s, from across the American dustbowl: 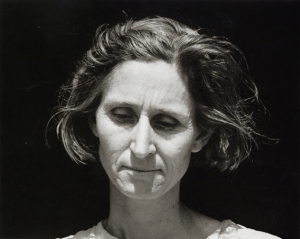 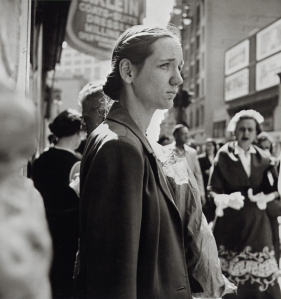 In the opening shots of The Hunger Games, as we are introduced to District 12, the home of Katniss and Peeta, our two main characters, we see a world that looks very much as if it were inspired by these photos. This is exactly as Suzanne Collins has described it in the book, and beyond just being a faithful rendition of the novel’s universe, it makes plot sense to show District 12 in this way: these people are hungry and desperate.

Then we meet our two main actors:

This is Jennifer Lawrence as Katniss Everdeen.

And this is Josh Hutcherson as Peeta Mellark.

Both actors look too well fed and too un-traumatized to be convincing.

As the film progresses, and we start to see Katniss display her running and hunting skills on screen, the miscasting of Ms. Lawrence becomes even more pronounced. As much as I have heretofore admired her acting, I have to point out that she does not appear – based solely on the evidence in this film – to have ever had to run for real. Any aggressive runners out there – and I was one before my left knee started giving me trouble – will have to agree. She runs like a debutante.

And that’s what seems to be the problem. Everyone just assumed that they could throw a lot of money into this project with minimal preparation, and people would pay to watch the movie. And they were right! And so who cares if the producers and director neglected to spend a few months having their two leads slim down à la De Niro and learn to actually fight and run?

If you who might be reading this saw the movie and disagree with me, please explain why …

I just finished watching all of the extras that come with the 4-disc Avatar Blu-Ray collection, and in the making-of documentary one can see how much training the actors – including the leads – went through in order to change how they moved, to fit the story. And this for a film in which most of them would only be seen after being translated for the screen via virtual CGI! I have a lot of issues with Avatar (perhaps to be discussed in a future blog entry), but I was impressed with the commitment of cast, producers and director. Of course, for James Cameron, Avatar was a labor of love, so he poured all of his passion into the project. I may find fault with Avatar‘s script, but the movie has great visual and performance integrity.

For Gary Ross, on the other hand, The Hunger Games seems to have been just a paycheck. If he had any burning passion to tell the story, it is not on display. With great inconsistency and absolutely no flair, he  made a movie with zero visual and performance integrity. Why does it matter? Because we should demand commitment and passion of the makers of even the lowest brow entertainment, lest we find ourselves no longer able to appreciate quality, since we never see it.