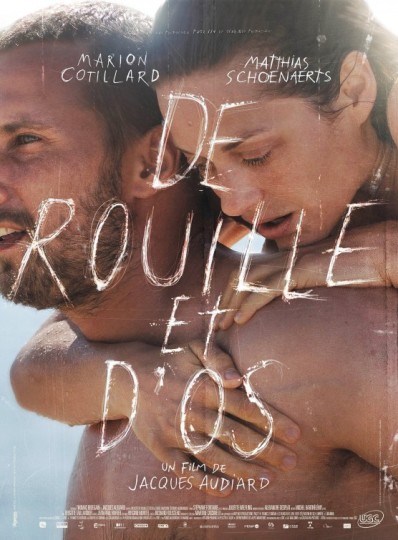 Rust and Bone is a film in which an Orca trainer from one social class meets and falls in love with a down-and-out boxer from a different social class. They each suffer damage both psychic and physical, and so must learn to trust and love again. Does it all work? You tell me after you watch it. In my opinion, it does, sort of. One thing I know, for sure, is that you will be as amazed at the integration of VFX (visual effects) into a non-science fiction narrative. It’s so striking because it is there without being distracting, and pulls you into the story, rather than being the story.

Much to my disappointment, I was unable to present this film, as scheduled, at the January 13 Cinema Sundays at the Charles, because BGE had scheduled a “planned power outage” for that morning. And now, today, the film opens in Baltimore, and gone is my opportunity to use all of my preparatory research. No matter. Life goes on. I’ll share a shorter version of what I had planned to say, and some of my impressions of the film, below.

The film is based on a short story collection of the same name by a Canadian writer, Craig Davidson. It is (loosely) drawn from the title story and “Rocket Ride.” I read both stories before last Sunday, and found them simultaneously disturbing and compelling. I feel the same way about the film, so that’s a good fit. A warning, should you decide to read the stories, yourself: one of them (which I’m stuck in now), “A Mean Utility,” is about a seemingly normal yuppie couple that goes in for pit bull dog fighting. Davidson’s a good writer, but his choice of subject matter makes for some difficult reading.

Speaking of writers, Jacques Audiard, the director of this film, was a writer before being a director (and he still writes, or co-writes, the films he directs). Some of his writing-only credits include Baxter (a strange little movie narrated by a psychotic dog – a pit bull! – who only pretends to be nice) and Venus Beauty Institute (a lovely gem of a movie starring Nathalie Baye as a 40-something woman looking for love in all the wrong places). His first film, as director, was in 1994: See How They Fall (which I haven’t seen). Since then, he has made only 5 more features, including Rust and Bone. Of those previous films, I have seen Read My Lips, The Beat That My Heart Skipped and A Prophet. Audiard’s father, Michel Audiard, was also a writer in the cinema. More than actual screenplays, the elder Audiard wrote dialogue for films, and was very well regarded in his day. When Audiard – fils – sets out to make a new film, then, he takes his time, is thoughtful about the process, labors over the script (these days, with his collaborator Thomas Bidegain), and what we see on the screen – whether we like it or not – is a product of a true auteur.

In all of Audiard’s films (at least the ones I have seen), there seem to be mismatched couples, whether they be romantic, parent/child, cross-cultural, or otherwise. His films have the structure of romantic comedies, in that way, except that Audiard is interested, instead, in the sincerity of the emotions that course between people, rather than the craziness of the mismatch.  He flirts with melodrama, always, but avoids bathos.  In his more successful films, such as The Prophet, he exhibits a masterful control of seemingly improbable plot threads, and the joy of watching comes from seeing him weave a narrative out of these unlikely bits of material.

Audiard tends to work with the same people over and over again, at least on his crews, but only rarely repeats lead actors (Niels Arestrup, who appears in both The Beat That My Heart Skipped and A Prophet, is an exception). His cinematographer, screenwriter, production designer, etc., are longtime collaborators. This has helped lend his films a unified aesthetic, over time (hence the “auteur” designation). He loves dappled sunlight, and loves showing us the light as we emerge from shadow. He also loves POV (point of view) shots, especially if they allow him an opportunity to “iris” (create a black circle around a specific point) the shot to focus our attention.

In Rust and Bone, the very first words we hear are spoken by a little boy: “J’ai faim” (“I’m hungry”). This plaintive bit of dialogue becomes the mantra of the two leads, each hungry for something which they cannot quite define. It will take serious catastrophes in their respective lives for them to become whole. Given that one of the characters loses significant body parts, this is ironic.

Both Marion Cotillard, as Stéphanie – the Orca trainer – and Matthias Schoenaerts, as Alain, or Ali, as he is called – the boxer – give fully engaged, visceral performances that help to carry us through many of the narrative improbabilities. If you are less prone to fixating on plot details than am I, then the inconsistencies of story will bother you less, and you will be able to sit back and enjoy the lovely interplay of these two capable actors.

In an NPR interview with Cotillard, aired on November 28, 2012, the actress had this to say about some of this “interplay:”

I quote these passages not to revel in the legless sex (did I just give too much away? I think not!), but to prepare you for the level of raw commitment you will see on the screen.

Unfortunately, other parts of the film did not work quite so well for me:

But there is a lot to recommend here, from the beautiful cinematography, by Stéphane Fontaine, to the wonderful naturalistic performances by Cotillard and Schoenarts. It’s not as powerful, nor as narratively coherent, a film as A Prophet, but it’s still pretty darn good. And if you watch the film and have concerns, as I do (after seeing The Cove) about marine animals in captivity, take heart from the issues of conscience with which Cotillard herself wrestled. This is from a December 5, 2012, interview she gave to Awards Daily, discussing what it was like to film the scenes in Marineland.

If, like me, you may have wondered what the title means, here’s a line from the Craig Davidson story, from the moment where fist makes contact with face: “”Lips flatten against teeth, mouth filling with the taste of rust and bone.” Enjoy! 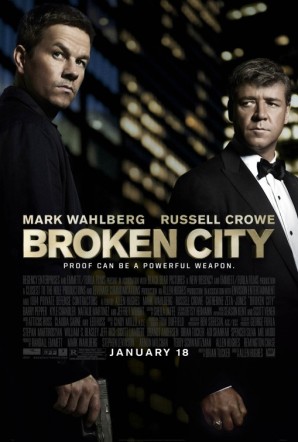 This is a mess of a movie. It has all of the trappings of a great political thriller, and a terrific cast (Mark Wahlberg! Russell Crowe! Catherine Zeta-Jones! Jeffrey Wright!), but it all amounts to not much at all. The restlessly roving camera (a comment I wrote in the dark about 20 minutes in) is an apt metaphor for a movie that is just all over the place.

Wahlberg plays Billy Taggart, a disgraced former police detective from Brooklyn (by way of Boston), who finds himself used as a pawn in the political games of Mayor Hostetler, played by Crowe. Now working as a private investigator, Taggart is hired by the mayor to follow Mrs. Hostetler (Zeta-Jones), ostensibly to catch her in flagrante delicto. But, soft! what light through yonder window breaks? Could that be  . . . oh, wait, I wouldn’t want to give too much away. On the other hand, if you’ve seen the movie’s trailer, you already have some sense that Taggart is being manipulated to set up a politically motivated murder. And if you haven’t seen the trailer, well, bravo, you know now as much as people who have seen it.

There is some good acting here. Jeffrey Wright and Wahlberg are, as always, watchable (even if Wahlberg always sounds like he’s from Massachusetts), and Crowe and Zeta-Jones have hammy fun with their parts. Barry Pepper, as the mayor’s rival for power, however, is horribly miscast.

But the script is not really worth the paper or electronic ink it was printed on, and as my late great film directing professor from NYU, Bill Reilly, used to say, “Script is coin of the realm.” And if you ain’t got that, a manic camera isn’t going to help. Nor is a lame final slo-mo shot of the protagonist going off to meet his fate.