Up in the Air meets I Am Love, but with a nice feminist twist where the female protagonist doesn’t actually need a man to be happy. That’s how I’m billing A Five Star Life (Viaggio Sola, or “I Travel Alone,” in the original Italian) and I’m sticking to it! In this visually sumptuous (sponsored by “The Leading Hotels of the World!”) coming-to-terms-with-life story about a visually sumptuous middle-aged woman – an amazing Margherita Buy (We Have a Pope) – we meet Irene (Buy), a luxury hotel inspector who travels the world for an agency that rates five-star hotels to determine whether they still deserve all five of those stars. Along the way, she is forced to rate her own romance-free child-free life and determine the best path forward.

On the one hand, it’s a beautiful movie, buoyed by Buy’s magnificent performance, and like The Trip to Italy and Magic in the Moonlight offering the viewer the aesthetic delights of gorgeous locations that (somewhat) make up for flaws in the screenplay. On the other hand, however, those flaws accumulate to the point where the script and characters become too schematic: conversations between Irene and her sister, and Irene and her former lover feel overwhelmingly expositional; a late arrival to the story – a British feminist intellectual – is inserted into the plot, it seems, merely to force Irene into self-awareness. Still, there’s something to be said for elegantly presented and marvelously acted eye candy, and you could do worse than spend 85 minutes (blessedly short!) watching Margherita Buy traipse through some of the most stunning hotels in the world. 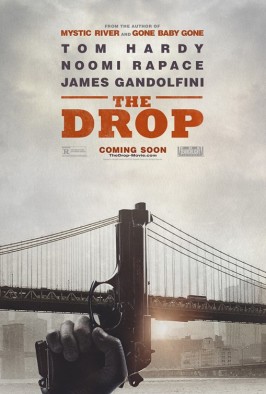 The Drop, based on Dennis Lehane’s short story “Animal Rescue” (which Lehane, himself, adapted for the screen), tells the story of 40-something Bob, a shy and mumbling Brooklyn bartender and erstwhile tough guy, as he struggles to maintain his calm and composure as what life he has (which isn’t much) is threatened by underworld shenanigans. Tom Hardy plays Bob, delivering yet another performance – after Lawless and The Dark Knight Rises – where his voice is altered in some way to make it hard to understand. Following this past year’s Locke, where he was so precise in his annunciation, it’s a return to form, of sorts.

The “drop” of the title refers to a designated location (changing all the time) where the mob collects funds (gambling and otherwise) from various sources. Whoever is in charge of that evening’s drop bears the dangerous responsibility of ensuring that none of the money gets waylaid or stolen. The Chechen mafia is not one to accept losses lightly.

Cousin Marv – played by the late James Gandolfini (Enough Said) in his last movie role – owns one of these occasional drops. Or rather, he used to own it, until the Chechens muscled in and made him merely a manager, leaving him with a (much reduced) seat at the table and simmering resentments. Bob works for Cousin Marv (and is his actual cousin), and though he is clearly the subordinate, there are occasional flashes of steel in his behavior that hint at their shared, possibly violent, past. One night – not a drop night, fortunately – two masked gunmen enter the bar and steal $5000 from the register (and therefore from the Chechens), setting in motion a plot filled with twists and betrayals.

Into this sordid story comes Rocco, an abused and abandoned (and adorable) pit bull puppy, found by Bob in a trash can one night as he’s walking home, and Nadia – played by Noomi Rapace (the original Girl with the Dragon Tattoo) – an abused and abandoned woman of unknown origin, in whose trash can Rocco has been discarded. Together, Rocco and Nadia (in that order) awaken Bob’s extinguished emotional core. When Nadia’s former boyfriend – and, it turns out, Rocco’s original owner – Eric (a terrific Matthias Schoenaerts, of Rust and Bone), shows up, his menacing presence threatens to awaken more than just emotion in Bob. Even while Bob remains largely a cypher, we sense his capacity for explosive violence, and spend most of the film awaiting his eventual eruption.

If all of this seems interesting, it is, up to a point. Hardy – mumbling affectation aside – is riveting, as always, and Gandolfini similarly holds our attention. I wish Rapace were as good here as she was as Lisbeth Salander, but it’s not entirely her fault that she’s miscast. And the pit bull puppy will melt the heart of even ardent haters of the breed (although the frequent close-ups of his face begin to feel a bit desperately manipulative after a while). The problems with the movie have primarily to do with the script. I haven’t read the source text, but much of what happens here feels a bit too preordained and predictable, and is not helped by Hardy’s occasional (and portentous) voiceover. We know that Bob will eventually act, so when he does, there is little surprise (the audience at my preview screening even tittered at that climax). Despite the weaker elements, however, there is much to enjoy. As a final farewell to Gandolfini, it may not live up to the standards of “The Sopranos,” but it’s still enjoyable.