In 2010, director Michael Winterbottom (24 Hour Party People) released The Trip, which was compiled from 6 episodes of a BBC television series of the same name. The premise was disarmingly simple (and delightfully preposterous): two British comedians, Steve Coogan (Philomena) and Rob Brydon (Tristram Shandy: A Cock and Bull Story), are invited by a UK magazine (The Observer) to write profiles of various restaurants in England’s northern Lake District. Actually, it’s Coogan (much better known in the States than Brydon, though Brydon is a big television star in the UK) who is the guest culinary columnist, but when his romantic partner deserts him, he invites friend (or, more accurately, frenemy) Brydon along for the ride. The fact that neither man has any particularly sophisticated knowledge of food doesn’t stop them from eating – and commenting on what they eat – with gastronomical gusto.

The result – at least in the movie (I did not see the individual TV episodes) – was a whacky road-trip movie that served as an excuse for these two very funny men (playing loosely fictionalized versions of their real selves) to riff on life, celebrity . . . and other (bigger) celebrities. We were treated to their dueling impressions of Michael Caine, Sean Connery and Roger Moore (among others). Actually, the Connery/Moore duel was my absolute favorite, since it allowed Coogan and Brydon to demonstrate true vocal versatility as, each repeating the phrase “I’d like a vodka martini; shaken, not stirred,” they seamlessly segued from Connery to Moore with no announcement or warning to the audience. It was the kind of comedy (which the British, à la Monty Python, excel at) where we couldn’t help but feel a little smarter when we got their jokes.

This didn’t mean that the film had no gravitas to it. On the contrary, even as they each cracked wise, they also admitted to their deepening melancholy in the face of advancing middle age. Was this all that life had to offer, they mused? Well, it wasn’t all that bad, but maybe it wasn’t all that they had hoped for, either.

And now comes The Trip to Italy, similarly compiled from 6 new episodes. Same idea, same actors, different country. Coogan and Brydon, just like Hill and Tatum in this past summer’s 22 Jump Street, even make fun of the very idea of doing a sequel to their first project. But is it exactly the same? Take a look at the posters for each film, side by side: 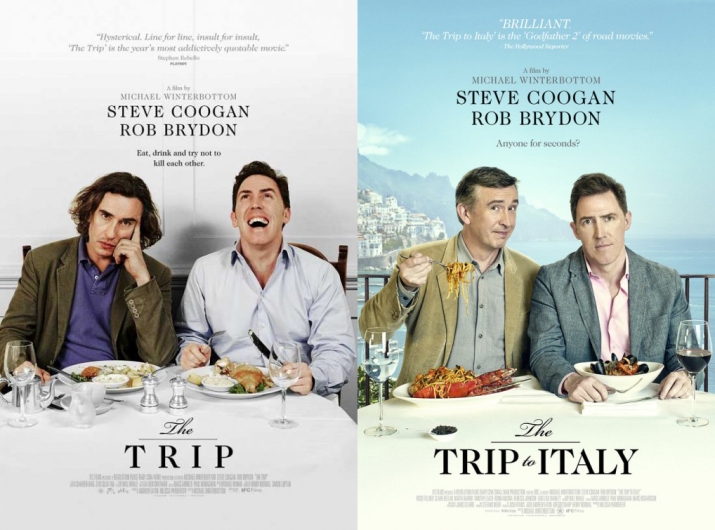 What do you see? Notice that Coogan, on the left, looks miserable in the first film, while Brydon, on the right, is the unhappy one in the sequel. Indeed, Coogan’s simmering resentments and disappointments drove the plot of The Trip, while it’s Brydon’s middle-aged crisis that is the center of The Trip to Italy. This is what makes the sophomore effort both newly interesting yet (slightly) less enjoyable than the initial outing, since for this viewer, anyway, Coogan is a more interesting screen presence and a funnier man. Still, there are delights aplenty, even if the comedians revisit many of the same impressions and imitations (Michael Caine, again! Sean Connery and Roger Moore, again!) as they did before. And despite my preference for Coogan, Brydon does own one of the funniest moments in the movie. Known in his homeland for his “small man in a box voice,” Brydon puts this strange talent to use in a sequence where they visit Pompeii and he encounters the 2000-year-old remains of a man . . . in a box. It’s absolutely brilliant. Finally, there is the breathtakingly gorgeous scenery of Italy, which makes for a lovely contrast to the mist-shrouded moors of the Lake District. Oh, and – as earlier – there’s a lot of wonderful food on display. So while the film may not be the most original offering out there, it is fun, funny and occasionally profound. Go on a date, and you’ll emerge laughing and ready for a meal.