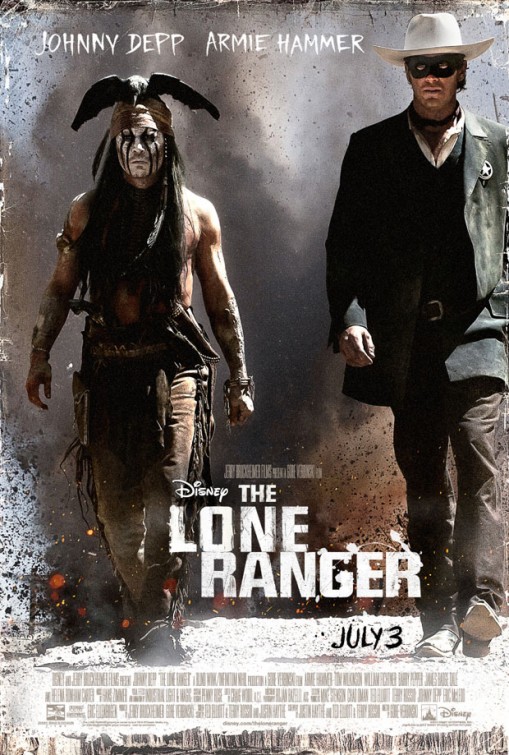 In the spirit of what would become an almost intolerable movie experience, the preview screening of The Lone Ranger began with a trailer for what looks to be a God-awful Delivery Man, the American remake of the delightful French-Canadian Starbuck. Where the latter was charming, the former appears crass. And so the tone of the evening was set.

Full confession: I have never been a particular aficionado of any of the many manifestations of the Lone Ranger character, whether in radio, film or television. All I really know is that he is a white cowboy who wears a mask, has a Native American sidekick named Tonto, and says “Hi-yo, Silver” or “Hi-ho, Silver” (there is some debate as to which one he says) when he gets on his horse. That’s it. I guess that’s not a bad state of innocence to be in when confronting a series reboot. One has no pre-conceived notions.

The Lone Ranger opens in 1933 in San Francisco, with a little kid – wearing a Lone Ranger mask – wandering into a Wild West exhibit at a carnival, where he discovers that the Native American on display is not a mannequin, but is the very alive – though ancient – Tonto (played – young and old – by Johnny Depp). Why 1933? That was the year that the original Lone Ranger radio series was launched. It seems odd that the characters in the series would already be legend within that same year, but no matter. This is merely a framing device, after all. Once the boy and Tonto begin their conversation, we flash back to 1869, and will continue – throughout the film – to cut back and forth between the two time periods.

In 1869, we find ourselves on a well-designed Western set (I thought, “Wonderful, this looks good!”), with Tom Wilkinson playing a railroad magnate about to complete the first transcontinental line. A train from the East is on its way, carrying Butch Cavendish (William Fichtner), a vicious criminal, who just happens to be chained to the young Tonto. On board is also John Reid (Armie Hammer), younger brother of the local marshal, Dan Reid. John has just completed his legal studies, and is returning to the town of his youth (where he will be ridiculed for not believing in guns). Lo and behold, Cavendish’s outlaw gang attacks the train, and what follows is one of the two best set pieces of the film, after which everything goes downhill until the movie’s final – also terrific – set piece (which also takes place on a train). In between we encounter hammy acting, too many special effects, serious narrative bloat, a lot of completely unnecessary supernatural and mystical silliness, and horrible one-dimensional portrayals of Native Americans (I’m not the only one who think this). It is, in a word, a complete and utter mess.

If you have a strong stomach for excess, there are some positive elements beneath the mire, however. Tom Wilkinson is quite good (as he always is). Ruth Wilson – an actress I hadn’t noticed before – as Rebecca Reid, Dan’s wife, brings strong emotional intensity to her scenes. And Helena Bonham Carter – delightful, as ever – won me over as a one-legged brothel madam. The look and feel of the film, in terms of Western landscapes – much of it was filmed in Monument Valley, like John Ford’s Westerns – is also good. When, during the opening battle on the train, we see cowboys on horseback burst through the frame to the sounds of Hans Zimmer’s Ennio Morricone-like score, it is quite a stirring experience.

But the script – including the inexcusably ridiculous portrait it creates of the central Native American character – and the two main actors – Depp and Hammer – are out of control and in need of some serious restraint (Hammer, especially). There’s just too much junk on the screen, whether it’s dumb dialogue, over-the-top acting, or a super horse standing in a tree branch (you’ll have to see the movie to understand that reference). I recommend that you go for the opening, duck out and do something else for the next 90 minutes (The Lone Ranger runs a total of 149 minutes), and then return for the finale. You won’t miss the muddle in the middle.