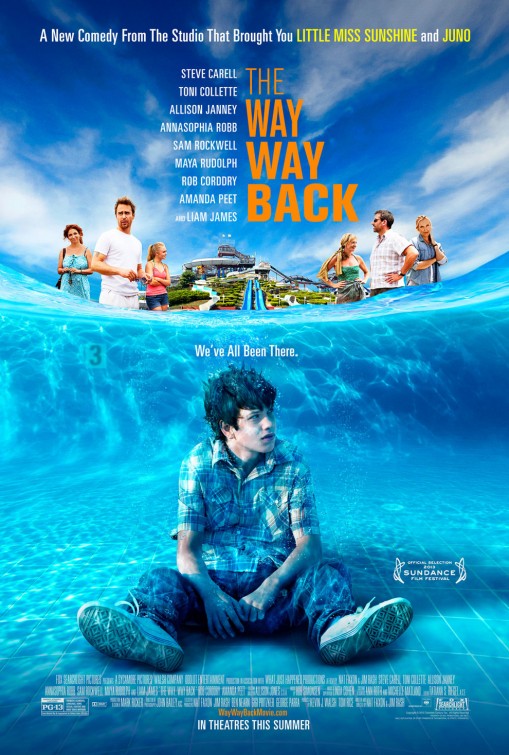 The Way Way Back opens today in Baltimore – a week after its release in major markets like New York and Los Angeles – and it has met with almost universally positive reviews from critics and moviegoers, alike, so far. It’s a sweet-natured coming-of-age tale about a misfit teenage boy who must find his way in spite of the neglect and contempt around him. This is hardly new cinematic (or any kind of storytelling) territory, but such narratives speak to all of us, in spite of their clichés, since we have all suffered through the pains of adolescence (some more than others). Furthermore, in a summer filled with overblown and script-weak blockbuster fare, it’s nice to see a relatively small “independent movie” (I put that in quotes because the film is from Fox Searchlight Pictures, which is, after all, a subset of a major studio), which delivers its goods without a single explosion or special effect (none visible, anyway). Co-written and co-directed by Nat Faxon and Jim Rash – making their directorial debut, in fact – who, along with Alexander Payne, won the Best Adapted Screenplay Academy Award in 2012 for The Descendants, The Way Way Back has definite charms. Unfortunately, those charms are only present in half the movie. Whenever the actor Sam Rockwell is on screen, the film sparkles. The rest of the time, it’s a slog.

The Way Way Back tells the story of 14-year-old Duncan (Liam James, of AMC’s “The Killing“), whose divorced mother, Pam (Toni Collette), is dating Trent (Steve Carell), who has a teenage daughter of his own. The film opens as the four of them are in Trent’s station wagon, heading to the beach for the summer. While the women sleep, Trent mercilessly berates Liam about his wasted potential in an effort to . . . what . . . bond/dominate/bully? And so the problems in the narrative begin. Right from the outset, it is never clear what motivates Trent to be such a jerk, except as a script device to give the angry and confused Liam someone to run from. After all, Collette’s Pam has to have seen something in Trent before this trip, right? He can’t be all bad, can he? Except that, as far as we see, he is. Which makes the casting of Steve Carell especially unfortunate. Carell has many positives as a performer, but try as he might, he simply does not have the range to pull this off. He plays mean, but it’s all surface, without any depth. Add to this the fact that he and Collette have absolutely no on-screen chemistry at all, and suddenly the film begins to buckle under the weight of its miscalculations.

There is an early bright spot, however, in the form of AnnaSophia Robb (Because of Winn-Dixie), who plays Susanna, the daughter of Betty (Allison Janney), Trent’s alcoholic beach neighbor. Just a few years older than Duncan, and a lot nicer to him than Trent’s own daughter, Susanna holds out hope that the summer may not be a complete waste. And AnnaSophia Robb, in a wonderfully understated performance, holds out hope that the movie may not be a complete waste, as well.

But then one day, Duncan, depressed, wanders off exploring, and comes across Water Wizz, a 1970s-era water park in need of some repair (yet still in full operation). He sneaks in out of boredom, and sits, moping, in a corner, where he is discovered by the park’s manager, Owen (Rockwell). And . . . the movie finally takes off. How delightful it is to watch a real actor at work. I like Carell, most of the time, and Collette, as well, but in this movie they do nothing of interest. The Way Way Back belongs to Rockwell. He plays Owen as an overgrown party-boy with just enough melancholy beneath his blustery good humor that you can understand why he would take an interest in Duncan. He’s irresponsible (consistently frustrating his assistant manager and love interest, played by Maya Rudolph), yet also deeply committed to making sure that all who come to his water park have a good time. He may be more jester than king, but both Water Wizz and the movie, itself, belong to him.

As the film continues, we go back and forth between Water Wizz and Trent’s house, between fun and glum, until the predictable showdown at the end between the two surrogate father figures in Duncan’s life. It’s no contest who wins. It’s too bad, though. It might have been nice if it had been a contest. With Carell’s comic talents, perhaps Trent could have been conceived as a less obvious creep, and more as a blustery manipulator: less blunt Stalin, more seductive Mephistopheles. Then there could have been some real tension over the battle for Liam’s soul. Instead, we get half a movie. True, that half is delightful, and probably worth the price of admission, alone, but it’s hard to remember that as you sit through the blundering other half.