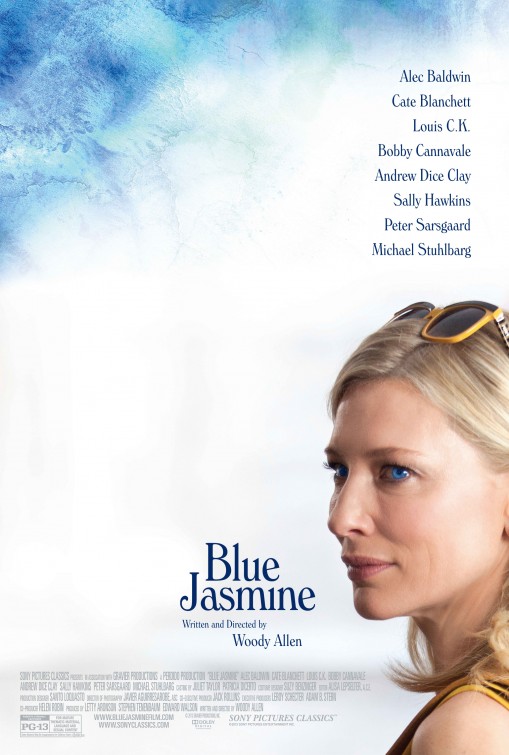 I don’t know about you, but it has been a long time since I have found a Woody Allen film anything other than an amusing trifle. Which is too bad, since back in his artistic heyday, Allen made such (to me) masterpieces as Everything You Always Wanted to Know About Sex * But Were Afraid to Ask, Annie Hall, Manhattan, Zelig, and, especially, Hannah and Her Sisters (my favorite of his entire œuvre). Even such less-perfect films like Love and Death, The Purple Rose of Cairo, Crimes and Misdemeanors, Husbands and Wives, Bullets Over Broadway and Mighty Aphrodite, still managed to rise above the mundane fare offered at the average multiplex. But then, whether it was just creative fatigue, domestic bliss (after he – ahem – married his lover Mia Farrow’s adopted daughter), or something else, Woody Allen stopped making interesting films. Even such relatively well-reviewed efforts as Match Point and Midnight in Paris were just re-treads of a lot of similar whimsical and/or bittersweet themes of his past. He ceased to be a filmmaker of any great consequence, and seemed to be living off of his past reputation.

But now comes Blue Jasmine. It is unlike anything Woody Allen has made in quite some time, and evokes the contemplative mood of such earlier films as Interiors, Stardust Memories, and Alice. I did not much like it, to be honest, but I was gratified to see Mr. Allen trying to do something more ambitious than the light fare of the recent past.

Blue Jasmine follows the story of a spoiled Manhattan housewife, the Jasmine (not her real name) of the title, played with total commitment by Cate Blanchett. She is in a downward spiral after the arrest and subsequent in-prison suicide of her Bernie Madoff-like husband, Hal (Alec Baldwin). Destitute and homeless, Jasmine flies out to San Francisco to live with her adoptive sister, Ginger (Sally Hawkins, sweet but unable to completely lose her British accent). The two sisters are nothing alike: Jasmine is all faux-aristocrat, while Ginger is proudly working class. Nevertheless, and in spite of Jasmine’s brittle disdain for everything and everyone in Ginger’s life, the siblings try to make a go at co-habitation. Some additional complicating factors include Ginger’s two kids from her first marriage to Augie (a spot-on Andrew Dice Clay) and her new blue-collar beau, Chili (a delightful – as always – Bobby Cannavale). Soon, however, Jasmine has a new suitor of her own: an aspiring politician, Dwight (Peter Sarsgaard), who knows nothing of her past and finds her captivating. Will Jasmine be able to use him to rise above the squalor (as she sees it) into which she has fallen, and to return to her dearly-missed patrician lifestyle? Well, if I told you, then that would truly be a plot spoiler . . .

Gee, writing out that plot summary just now made me think more highly of the movie. It sounds intriguing, right? Well, for me, the problem is that the central character is profoundly irritating, and since she is in every scene, so, therefore, is the movie. While the script takes a hard look at the sins of the financial titans of our modern world, it does not delve much beyond the surface of what makes them tick. And while at one point – early in the film – it seems as if Allen might have fun with the culture clash between Jasmine’s and Ginger’s worlds (ahhh – how the film would benefit from more Bobby Cannavale!), he instead elects to focus almost entirely on Jasmine’s journey from mistake to mistake. In spite of Blanchett’s powerful performance, the film never develops into much more than a two-dimensional portrayal of her character.

Nevertheless, I recommend the film to all Woody Allen fans who have now long despaired of any return to substance from the master. This is a deeply flawed work, but it is at least interesting, if – like its protagonist – simultaneously very annoying.