Another year, and another Maryland Film Festival is upon us. We are so lucky to have this event, which showcases such a wonderful variety of films to the city and the state. I go every year, and cannot possibly see everything, but try to see what my schedule allows. I may not like all of the films I see – and I even have a lot of reservations about the programmers’ continuing interest in mumblecore filmmakers and their ilk – but I embrace the festival for the exciting cultural and artistic renewal it brings to Baltimore every May. What follows is a (brief) recap of what I saw during the first two days.

By far my favorite film of the opening night program was More Than Two Hours, from Iran, which screened in competition at the 2013 Cannes Film Festival. It tells the harrowing tale of a young couple – unmarried – looking for a hospital to treat the woman’s post-coital bleeding (the two have just consummated their relationship). Since they are not married, no hospital in Tehran will serve them, and the film ends on a desolate note, with nothing resolved. It is a vibrant, if bleak, cinematic tour-de-force.

Of the other films, Verbatim is a farce that uses an actual court deposition transcript to create an absurdist “who’s on first” situation that only gets funnier as it goes along. It’s light fare, but well made and acted. The Bravest, the Boldest features a strong performance from its female lead, yet fails to manage its tone with any kind of consistency (in the interest of total disclosure, the director, Richard “Moon” Molson, worked for me at a summer camp – SOCAPA – I ran in 2004, and I found him a reliable screenwriting teacher). For a movie about the death of a child serving in the military, it veers too often into the kind of raucous comedy better left to Verbatim. Nothing wrong with some jokes to leaven the tragedy, but the film feels like a misfire. Neither Easy nor I Was a Teenage Girl offered any surprises or much of interest.

On Thursday, the festival screenings began at 4, and I was only able to make it to two features. 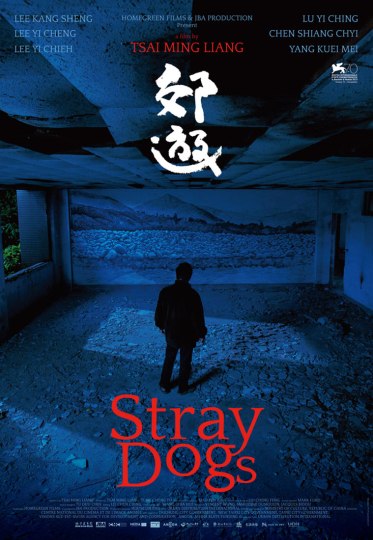 I am completely unfamiliar with this director’s work, but am now significantly intrigued that I will watch more of it. I am still not sure of the deeper meaning behind the film’s arresting images; however, as I sat in MICA’s Brown auditorium, I was frequently mesmerized by the long-duration takes and carefully crafted compositions. Tsai Ming Liang doesn’t move the camera much, and loves to leave his static frames running for long enough so that we are forced to watch the actors’ performances cease to be performances and become something much more raw. Nominally about a fractured family coming together after a strange unexplained separation, the film eventually brings us to one of its final scenes, which features an over 15-minute tight two-shot of the father and mother staring at a mural, inches apart from each other. He stands behind her, hesitating to reach out (and drinking), while she starts to cry. It took me about five minutes to realize that her eyes had been slowly gathering water, and when the first tear trickled down her face, it caught me by surprise. I was moved beyond what I thought I would be by such a simple development.

I don’t think I’ve ever seen a film quite like this. It’s a melodrama with very little overt displays of emotion, yet with roiling passions just below the surface, barely contained. That mural – a metaphor for a life just out of reach, or a life lost – hangs incongruously in a ruined building that evokes Andrei Tarkovsky’s Stalker (as do the “stray dogs” of the title, although the entire family is, in effect, a pack of strays, as well). I love the visual duality in the mural room. In the foreground are patterns of rocks, water and light that mirror the rocky natural landscape of the painted wall. What are we, after all, but mere reflections of our desires and needs?

It’s a tough experience to sit through, in a way, but I highly recommend the film, and it plays again tonight at 6:45.

I do not like Joe Swanberg‘s work, so I am more angry with myself for attending this screening than with the director, himself, for making the film. What made me go? I read an article about the anti-blockbuster films of the summer, and thought I would give it a chance. Whoops.

The thing about Swanberg and his fellow mumblecore artists is that their films are always suffused with an inescapable (and, for me, intolerable) narcissism. We are usually forced to watch the directors, themselves, in central roles, playing uninteresting versions of themselves as they go through crises of their own lack of invention. In this case, Swanberg plays only a supporting role, yet even that is too much, as the film is always better when he is not in it.

Happy Christmas is like a late-20-something version of Blue Jasmine: sad-sack sister (Anna Kendrick, almost ruined for me by this movie) comes to Chicago to recuperate from a ruined life, wreaking havoc on the life of her long-suffering sibling (Swanberg). Self-destructive and irresponsible, she repeatedly fails to learn lessons of humility and growth. Melanie Lynskey (whose Aussie accent is absent at the start, then pops up after 15 minutes and stays until the end . . . sort of) and Lena Dunham are around to add to the lack of interest. Unless you’re a fan of this kind of filmmaking – as was about half the audience I saw it with – in which case you’ll eat up every morsel and laugh at every joke. Hey – no problem – it takes all kinds.

Shot on Super 16mm film by Ben Richardson, the cinematographer of the gorgeous Beasts of the Southern Wild, the film has an inexplicably ugly palette (oh, wait, that’s a Swanberg thing . . . I forgot). If that weren’t bad enough (though it suits the flat affect of the film), the filmmaker is of the opinion that people being drunk or high on screen is, in and of itself, funny. It can be, but only if funny things happen when people are drunk or high. And final note, Mr. Swanberg: your kid is cute (and more interesting than you), but a cute kid – like a drunk character – is also not enough to make a movie. Don’t worry though, you clearly have a fan base, and I have no doubt you’ll be back here next year. This time, however, I won’t be in the audience.