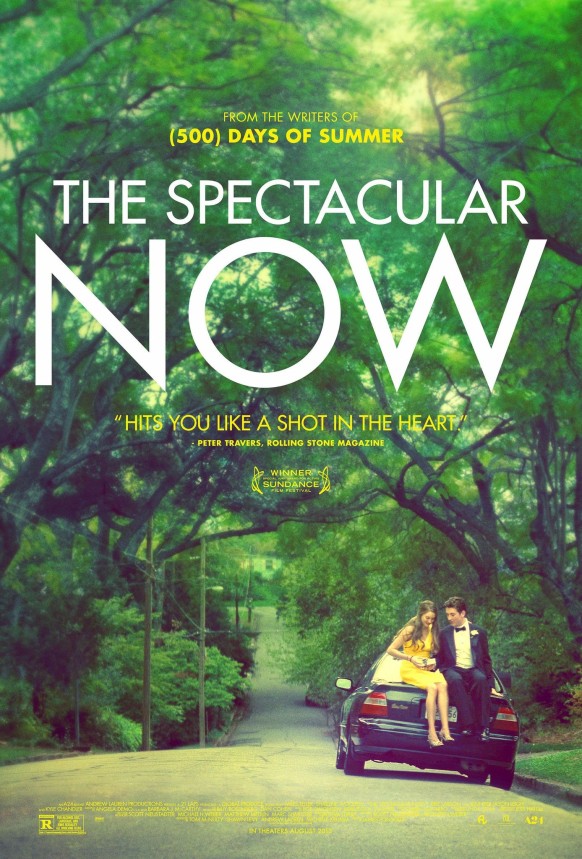 James Ponsoldt has a thing about alcohol. In both of his previous features, Off the Black and Smashed, he explored the dangers and ravages of alcoholism. Now, in his new film, the surprising and (mostly) charming The Spectacular Now, he takes on teen addiction while ostensibly making a coming-of-age love story. It is this ability to make a film that deftly tells two stories at once, in spite of its occasional missteps, that makes James Ponsoldt a director to watch.

The worst thing about the movie is the title, taken directly from the book on which it is based, by Tim Tharp. I didn’t like it when I read the book, and I don’t like it when it’s attached to this film. Although it speaks to the mindset of the protagonist, high-school party boy Sutter Keely, who lives only in and for the present, it also just . . . lies there, promising very little. Perhaps The Great Keely – or Sutter Rides Again – could have similarly spoken to how our hero sees himself, and engaged us from the start. This may seem extremely superficial, but I dwell on it because I can’t seem to shake off my visceral dislike of it.

That said, the film is well worth seeing. It tells the story of Sutter (a very strong Miles Teller), a popular, if underachieving, high school senior. Life is one big party to him, and he keeps the buzz going throughout the day with a flask full of whisky. He’s dating the perfect girl, Cassidy (Brie Larson), until one miscommunication too many leads her to dump him. Adrift, Sutter goes off on a “spectacular” bender, after which he is found on a suburban lawn by Aimee (a luminous Shailene Woodley, who last wowed audiences in The Descendants), a classmate of his whom he has no memory of ever having met. Aimee is Sutter’s polar opposite: shy, studious, a wallflower. Indeed, Woodley is almost too lovely to pull off such a character, but we quickly fall under the spell of her easy rapport with Teller. For underneath Sutter’s boisterous cheer, he is an extremely nice (and insecure) guy, always willing to do something for a friend (even if he’s too drunk to reason properly). And so he takes on Aimee as a project. He lets her tutor him if she’ll let him take her out. When he starts to actually fall for her, it catches him completely unprepared.

And so this could have been a cute story about how love conquers all, and how Sutter’s not-so-budding alcoholism is cured by the ministrations of a good woman. Instead, thanks to a fine script adaptation by Scott Neustadter and Michael H. Weber (500 Days of Summer) and the strong direction of Ponsoldt, what we get is a lot more complicated and realistic than that (though the movie does offer a much more hopeful ending than does the book). It’s not so easy to change, and the rush of young love between Aimee and Sutter does not lead the latter to an immediately better self. But it does bring Aimee out of her shell, and watching her blossom into a full-fledged human being is one of the delights of the film.

Along the way, we get terrific supporting performances from Kyle Chandler (as Sutter’s alcoholic father), Jennifer Jason Leigh (Sutter’s mom), Mary Elizabeth Winstead (Sutter’s sister), Bob Odenkirk (Sutter’s boss), and Andre Royo (Bubbles, from “The Wire“), as well as from most of the rest of the cast. It’s a strong ensemble piece, filmed in Ponsoldt’s hometown of Athens, Georgia. My hats off to the director who, like me, is also a college professor, and has managed to make three interesting films while also teaching. I’m jealous. Good work. There are a few missteps – such as a car accident that is filmed from an unnecessarily confusing angle, and an ending that doesn’t quite work – but  overall this anti-John Hughes teen film works on most levels. I recommend.