Let’s start with the fourth entry in the Transformers movie series. Film critic A.O. Scott, in his New York Times review, somewhat (but not entirely) jokingly referred to this new film as an example of a kind of auteurist cinema, in that the aesthetic clearly reflects the vision of one man, director Michael Bay (who also directed the previous three films). It was Scott’s review (hardly favorable, but thought-provoking because of that comment) that led me to the cinema yesterday to watch Transformers: Age of Extinction.

My verdict? I want those 2 hours and 45 minutes back. And no, there is no particular aesthetic on display. Just a lot of noise, cartoonish dialog, and very bad acting. However, to be fair, the film opened to big domestic and international office, and appears to have legs through the Independence Day holiday weekend, so it’s providing escapist entertainment to a lot of people,. Who am I tell the folks who enjoy this kind of spectacle not to see it? I enjoy this kind of spectacle, too, however – I loved Captain America: Winter Soldier, for example – but not when the plot is this incoherent. Since the film opens with the title card “in association with Hasbro,” reminding us that the sole inspiration for the entire series was a line of children’s toys, the fact that there is little story coherence should come as no surprise.

I cannot even begin to summarize the film, other than to say that it takes place about 5 years after the last one, and that certain sinister government agents are colluding with an intergalactic bounty hunter to kill and capture humanity’s former transformer allies, the “Autobots,” and that Mark Wahlberg (appearing for the first time in the series), playing a down-on-his-luck inventor is the unlikely savior of both Optimus Prime (the leader of the Autobots) and the planet. Kelsey Grammar and Stanley Tucci are along to ham it up (and collect their paycheck), and a screaming blonde in short shorts plays Wahlberg’s daughter. Oh, and confirming my sneaking suspicion, as I watched the film, that it was written by a 12-year-old boy – like last year’s Pacific Rim, which featured dinosaurs and giant robots – the movie ends with giant metallic robot (excuse me, Autobot) dinosaurs. I kid you not.

Of far greater interest to me, however, than any of that, is our continuing fascination, as a species, of watching our homes, cities, countries and planet destroyed in various apocalyptic fantasies. We like to die (or, rather, see others die) vicariously on screen. Mayhem and death make for great catharsis. 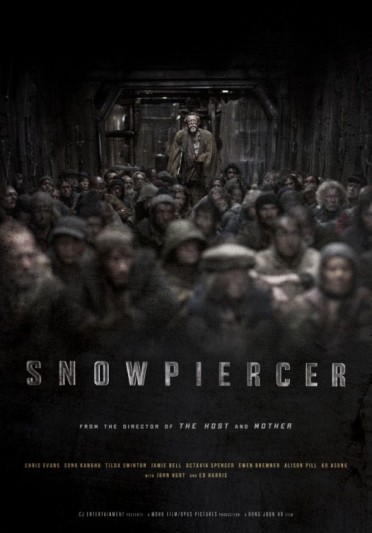 However, if you wish to indulge in such a fantasy, might I suggest a different movie, one with an actual sense of visual design (i.e, aesthetic): Snowpiercer. Directed by Bong Joon-ho (The Host), and based on the French graphic novel Le Transperceneige, the film is rich in atmosphere and features powerful performances from some very fine actors, including Chris Evans, John Hurt, Octavia Spencer, Tilda Swinton, Ed Harris and Jamie Bell. Many people die (though the worst acts of violence are never shown in gratuitous close-up), and the fate of all of humanity is always on the table. In short, it’s just like Transformers: Age of Extinction, only with a better script, better cinematography and better direction of actors. True, a close textual analysis of said script just might reveal that the core plot is no less moronic than that of Michael Bay’s robot opus, but since there appears to be an actual intelligence behind the camera and a real of sense of design to the mise-en-scène, it is easy to suspend one’s disbelief and allow the film’s vibe to take firm root in one’s soul. In spite of some gaping story problems, I was won over from the get-go.

We are on a special self-sufficient train – “The Rattling Ark” – in 2031, 17 years after our misguided leaders sprayed a new chemical – CW7 – into the atmosphere to combat global warming by lowering the earth’s temperature. Whoops. Big mistake. The world froze, killing all life on the planet. But not before a group of select individuals were gathered onto this train, which now circles the globe in an endless loop. On board, a strict class system exists, enforced by the residents of the front of the train (the upper classes), who keep the denizens of the rear in working-class thrall. Chris Evans (proving, with this and Captain America, that he can truly carry a movie), one of these latter unfortunates, under the tutelage of John Hurt, and with Octavia Spencer and Jamie Bell in tow, plans and then leads a revolution to upset the order and gain control of the train. Tilda Swinton – almost unrecognizable in buck teeth – leads the oppressors. What follows is a series of masterfully staged intense battles – fought in close quarters – where anything can and does happen. By the time we get to the front, we will have been surprised and amazed by what we have seen, with more surprises to come.

This is one of the better post-apocalyptic films I have seen recently, which elevates the occasional stupidity of its premise with the deep questions it asks us to ponder about class and power. Unlike in Transformers, the deaths, when they happen, mean something. And the ending, if absurd, is nevertheless profoundly moving.

Speaking of profound, The Fault in Our Stars, based on the best-selling book of the same title by John Green, aspires to teach us some deep lessons about the value of life and the meaning of death. It is, in other words, the antithesis of a movie like Transformers: Age of Extinction. If I was somehow less moved by it than I was by Snowpiercer, it is not because I am a heartless bastard (at least I don’t think I am), but rather because it wears its intentions so obviously on its sleeve, and thereby too often feels as if it’s using its characters’ deadly illnesses (along with some awful music on the soundtrack) as a manipulative emotional cudgel. Whenever it backs away from bathos, however, The Fault in Our Stars can be very effective, largely thanks to its two appealing main actors, Shailene Woodley (The Spectacular Now) and Ansel Elgort (Divergent, in which he plays Woodley’s brother!). The film opened very strongly a month ago, but has since largely faded from cinemas (after highly respectable earnings), but I only got around to seeing it today (I wanted to read the book first).

Woodley plays Hazel, a 17-year-old girl with terminal cancer, who meets Elgort’s Augustus, an 18-year-old cancer survivor with an amputated leg, in a cancer support group. Each in their own way is trying to lead as normal a teenage life as they can, given the circumstances, and each resists being seen as merely a victim of their disease. And for that, both book and movie deserve all the success they have earned. With wit and good humor, Hazel and Augustus flirt and insist on their right to live, and their moments together are almost always strong. There is no way to avoid the ultimate pitfall of terminal-disease stories, however, which is that the inexorable advance of the tumors takes the burden away from the screenwriters to write scenes that rise above easy sentimentality. The Fault in Our Stars does seem aware of this problem – and author Green has injected a bitter and alcoholic writer (played by Willem Dafoe in the film), whose book both Hazel and Augustus admire, as a cynical counterweight to the sappy sweetness – but it still succumbs to it. How you ultimately react to the film will depend on your tolerance  for such manipulation (mine is low).

Still, there is much to recommend here, since, as in Snowpiercer, the film reminds us why death has meaning (because life is so precious). In spite of its faults, it mostly succeeds in that one essential regard.