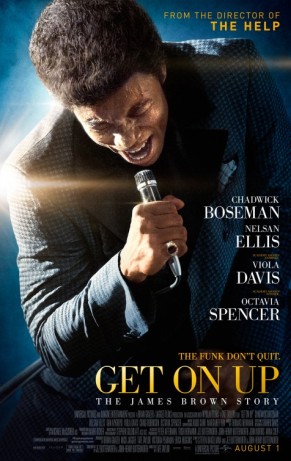 With a terrific central performance by Chadwick Boseman (42), Get on Up has what it needs to give “Godfather of Soul” James Brown his due respect, but is hampered by a messy script and pedestrian direction from Tate Taylor (who did a little better in The Help). Papa may “got a brand new bag,” but it’s a very mixed one, indeed.

Part of the problem is the film’s approach to chronology. It begins in 1993, although we don’t know that it’s then until the end, when we return to the same scene of James Brown walking backstage to the chant of a crowd calling his name. We then immediately jump back (not that far) to 1988, where we meet a seemingly confused Brown who brandishes (and shoots) a gun in a building he owns, and then we keep moving backwards, now to 1968 and Brown’s musical tour of Vietnam, where he performs for the troops. We make one final quick jump, to 1939, where Brown is a little boy with warring parents, the result of which feud leads his mother (a wasted Viola Davis, who should have won an Oscar for The Help) to abandon young Brown. Soon he is brought to a brothel run by an aunt, played by Octavia Spencer (much better served by this summer’s Snowpiercer), who becomes his de factor mother, and from then on we jump around from time period to time period, often without specific reason. Sometimes there are subtitles to the dates, explaining why they’re important, and sometimes not. Sometimes Bozeman breaks “the fourth wall,” to address the audience directly, and sometimes not. There’s no rhyme or reason to any of it.

Which is too bad, since Bozeman (who, according to the credits, lip-synched to Brown’s original vocals) brings great energy and charisma to his turn as the singer. After seeing what Bozeman did in 42 and here, it would be great to see him next create a role from the ground up, without benefit of biopic research. It would also be wonderful to see him act in a movie with a better script. Still, he is almost worth the price of admission, as is Nelsan Ellis (“True Blood“) as his long-suffering friend and lieutenant, Bobby Byrd. It’s a very mixed bag, indeed.