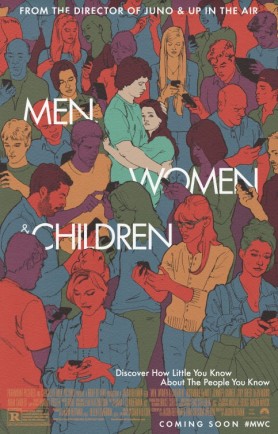 What to say, what to say? This is a movie that takes itself so seriously, yet has so little of consequence to say. Couple that with the choice of writer/director Jason Reitman (Juno, Up in the Air) to use Carl Sagan’s Pale Blue Dot speech as an awkward framing device – combined with shots of the Voyager spacecraft leaving our galaxy – and you get much hysterical ado about not much at all. It’s too bad, since a lot of good people are acting up a cosmic storm here, including Judy Greer (Kitty Sanchez on “Arrested Development“), Dean Norris (Hank on “Breaking Bad“), Ansel Elgort (The Fault in Our Stars), Rosemarie DeWitt (Kill the Messenger) and Kaitlyn Dever (Short Term 12) (less so Adam Sandler and Jennifer Garner, in one-note roles). But that’s what happens when you dress up platitudes in fancy duds: they’re still hackneyed.

What’s it about? Life! Sex! Depression! Loneliness! How we live in an interconnected world yet are so unconnected! Imagine a mall full of people looking at their smartphones, and you’ll have the essence of the film’s message. Since the whole affair is narrated by Emma Thompson, much of it ends up feeling like Crash – multiple stories and all – with a British-accented voiceover (though that might be unfair to Crash, as superficial as that film was). If that sounds appealing, then Men, Women & Children might just be for you (OK, I’ll admit I laughed at some scenes, particularly early on, and loved all interactions between Judy Greer and Dean Norris, but that’s it). I recommend seeing Pride, instead (both open today at the Charles), however, which does a far better job selling the importance of the need for human attachment.