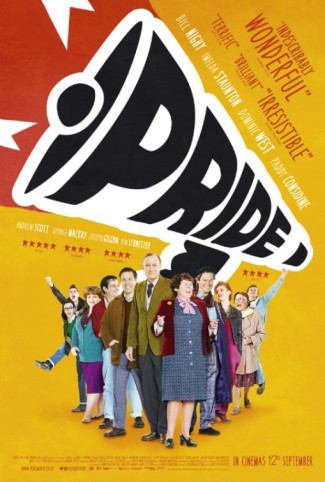 If, like me, you grew up with the songs of Pete Seeger played loudly, and proudly, in your home, then the opening credits of Pride will immediately strike a welcome chord. My song of choice, as a child, was “Little Boxes” – which I listened to gleefully without understanding a word of the lyrics – but as I aged I gained a greater appreciation of the humanism and progressive ideology of the man, of which his great workers’ anthem, “Solidarity Forever” – the title music of theater director Matthew Warchus‘s new film – is a powerful example. In the spirit of the late champion of labor rights (among other causes) and promoter of rousing feel-good folk songs, Pride is a movie which – though contrived and overly sentimental at times – will leave you profoundly moved and hopeful. It’s a film that promotes the (radical!) notion that there are other ideas worth rallying around than patriotism and fear. In a midterm election year, that’s not a bad thing to keep in mind.

The film – based on true events, as a title card informs us – takes place in the 1980s United Kingdom of the Margaret Thatcher era, beginning with one London Gay Pride March – on June 30, 1984 – and ending with another, one year later. One day, 20-something activist Mark (a charming Ben Schnetzer, from The Book Thief) notices a diminution in the numbers of police harassing young gays like himself, and figures out where they’ve all gone: to harass the country’s miners, all of whom are out on strike. Not content to work only on behalf of his own constituency – and understanding full well how workers and oppressed minorities are all connected (and how his community is directly benefiting from police distraction) – Mark gathers a small coterie of fellow gay men (and one lesbian) to raise money in support of the miners. It’s a hard sell – many gays and lesbians have long suffered severe bullying and discrimination at the hands of their working-class brethren – but Mark is a charismatic leader, and soon his group – LGSM (“Lesbians and Gays Support the Miners“) has raised enough cash to be worth donating. The problem is … to whom? For while gays and lesbians may be able to unite in support of the miners, it proves a bit harder to find miners willing to accept help from gays and lesbians. This is the 1980s, after all.

Fortunately, for the eventual betterment of all concerned, an older Welsh union worker misunderstands the name of the group over the phone, and soon a strike leader, Dai – played by an excellent Paddy Considine (Submarine) – is on his way to London for a meet & greet. The awkward (yet very funny) first sit-down sets the tone for the rest of the film, as Dai, Mark and the rest of LGSM conclude that what binds them is greater than what separates them. Convincing the rest of the world of the same is what drives the plot of the film. With laughter and tears – most of it earned – the movie takes us on a satisfying journey that – even with its almost too-perfect conclusion – refuses to gloss over the harsh realities of the world. With great performances from all involved – including Bill Nighy (The Best Exotic Marigold Hotel), Imelda Staunton (Vera Drake), Dominic West (McNulty from “The Wire“), Andrew Scott (Moriarty on “Sherlock“), and especially Jessica Dunning (whom I had never seen before), among others – Pride is a wonderful treat, and just what you need to see this weekend. It opens today at the Charles. Go!