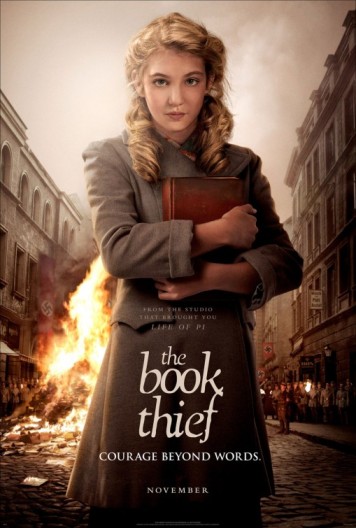 The best thing about this film are the young leads, Sophie Nélisse (Monsieur Lazhar), as Liesl – pictured in the poster, above, and the “book thief” of the title – and Nico Liersch, as Rudy, her neighbor and friend. The adults – Geoffrey Rush (The King’s Speech, and so much more) and Emily Watson (War Horse, and so much more) among them – are all right, if a bit hammy, but it’s the kids who shine. The worst thing about the film is Death (with a capital D) – voiced by Roger Allam (Inkheart, also as narrator) – who narrates the film with a sardonic flair that I found profoundly irritating in a film about Germany, World War II and the Holocaust. I understand that this device comes straight from the source (the book of the same title, by Markus Zusak), which I have not read, but while it may have worked on the page (though Janet Maslin of The New York Times dubbed it “Harry Potter and the Holocaust”), once brought to life (pun intended), it is supremely off-putting. There are some good moments within, but there is no escaping this unintentional trivialization of the mass extermination of Jews in Europe. Death – the narrator – makes death – the end of life – less profound than it should be.

Which is too bad, because at first the narration works. Before we meet any of the characters, we hear, as the camera descends through the clouds to a moving train, the following words: “One small fact. You are going to die. No one lives forever.” This sets us up well for the arbitrariness of who died and who lived during the war and attendant genocide. But as Death continues his commentary, the arch irony of his tone begins to grate.

We begin our story in 1938, as Liesl – not quite 10 years old – meets her adoptive parents (Rush and Watson) in a small German town (her mother, a Communist, has been forced to give her up). It is shortly before Kristallnacht, and though there are Nazi flags everywhere, the residents treat them and the required party rituals with a mix of enthusiasm and resignation, depending on who they are. Liesl’s new parents are indifferent to the Nazis, but careful to hang their flag like everyone else. Liesl’s neighbor Rudy – a lookalike for a Hitler Youth poster child – is more interested in Liesl than the Führer, and life doesn’t seem all that different from a Frank Capra film. But then the book burnings and the attacks against Jews begin, and life quickly begins to change. Most submit – willingly or not – while a few resist in ways large and small. Liesl and her family (and Rudy) fall into the latter category.

This part of the film – while Death leaves us alone – is actually quite interesting, showing us one view of what it might have been like to be an ordinary German faced with an extraordinary set of circumstances. How would you behave, the film seems to ask. Well, for Hans (Rush), the choice arrives in the form of Max (Ben Schnetzer), the son of an old Jewish friend – a man who had sacrificed himself to save Hans in World War I – who needs refuge from the Nazis. While Rosa (Watson) initially wants to turn the young man in to the authorities to protect the family, her conscience prevails, and so they take on the risk of hiding him (and an extra mouth to feed). When Max falls ill, Liesl steals books from the home of the local Buergmeister (the town’s Mayor) to read to him, and it is through this interaction that she escapes (somewhat) from the horrors outside. But this is a film about war, and, as Death so casually informed us at the start, people do die. Which would be fine, if we could just experience that death without the return of . . . Death.

I give the film a very mixed response, therefore. My feelings about it are not helped when I think of the overbearing score by John Williams (he of the many soundtracks for Spielberg and Lucas). Nor was I happy to hear everyone speaking English with a German accent – but this has been a convention of Hollywood filmmaking for so long that it’s almost not even worth commenting on. In any case, “mixed” does seem to be the overall consensus out there, and I share a few other reviewers’ opinions below:

Jonathan Kim of The Huffington Post (more negative than positive)

If you see it, let me know what you think!