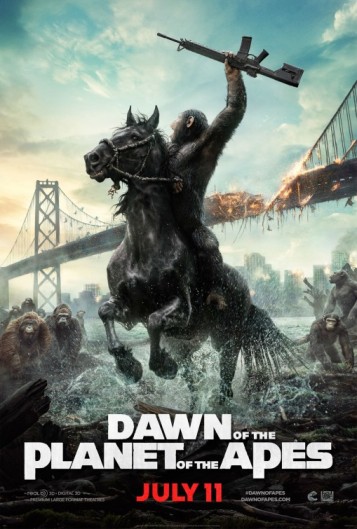 Summer is always a tough time to be human at the movies, and now we have a new threat from neither zombies nor aliens but – gasp – animals: in fact, from our closest living relative, the chimpanzee. For those of you who saw the first film in this rebooted series, the terrific Rise of the Planet of the Apes, you know that this is a very serious threat, indeed. Whereas in the original 1968 film, Planet of the Apes (based on the 1963 novel of the same name by French author Pierre Boulle) – and the four sequels it spawned – the reason behind apes becoming the dominant species on our planet had to do with a time loop (as in, a talking chimp came back from the future to create the new race of talking chimps), in this new series the root cause of our own destruction is – as in all good disaster films – hubris. James Franco, in Rise, playing a scientist searching for a cure for Alzheimer’s, creates a virus to increase brain power, which is first tested on chimpanzees. When one such chimp goes on a rampage, forcing the owner of the lab to order all of the animals to be put down, Franco is unable to destroy the baby of that rampaging mother, and takes him home to raise as, more or less, his own child, naming him Caesar. By the end of the film, young Caesar leads a large group of liberated primates – all with enhanced intelligence, like himself – into Muir Woods, outside San Francisco. The movie ends ominously: though the apes are free, the very same virus that makes them super-smart is also deadly to humans, and we see an infected airline pilot walking through a crowded airport, coughing blood, as the credits roll.

One of the most interesting aspects of that first film is the fact that our sympathies lie so strongly with Caesar, rather than with the humans. True, we like James Franco, but we love Caesar. A CGI creation, Caesar is nevertheless acted by a real person, Andy Serkis (Golem in The Lord of the Rings films), a “performance capture” guru, whose movements and vocalizations form the basis for the animations laid down later. As Caesar grows from a baby into a mature adult, we feel he pain as his realizes how the world sees him and his ilk. Since we know he is smarter than many humans, we react viscerally to the mistreatment he suffers when Franco is forced to give him up to a shelter. I found it fascinating to be identifying with a character whose actions will eventually lead to the destruction of my own species. I enjoyed the way the film makes us question our allegiances, and makes us see the world through the eyes of our ostensible enemy.

In Dawn of the Planet of the Apes, which takes place 10 years after Rise, the virus – now called the “Simian Flu” – has wiped out most of the world’s human population. Our friends, the liberated chimpanzees (and gorillas and orangutans), have spent the time building a lovely community in the redwood forest. They follow Caesar without question, and he now has one adolescent son and another baby on the way. It’s been a few years since the last sighting of any humans when, one day, a small search party of men – and one woman (Keri Russell, fine but under-written) – led by Malcolm (Jason Clarke, very good), wanders into the woods, looking for a hydro-electric dam to restore power to the nearby city. Things do not go well – a young chimp is shot, and the humans chased away – which leads to a series of escalating confrontations and, eventually, full-out war. Caesar tries to keep the peace, but a rival of his, Koba, works behind the scenes to strike at the humans “while they’re weak” (it seems that Koba has very nasty memories of his time in captivity). Since chimpanzees are significantly stronger than humans, once an army of them gets a hold of guns, the few remaining humans who have not succumbed to the virus don’t stand a chance.

Much more than in the first film, this movie is all about the apes and their internal relationships and politics. Jason Clarke and Keri Russell try hard to make us care about their own situation, but the script keeps returning us to the problems of Caesar vs. Koba. The movie even opens and closes on a close-up of Caesar’s eyes (as if to make the point that, the closer you get, the less they look “other”). Indeed, Dawn is at its best – better than its predecessor – when it focuses on the primates. It is at its worst – worse than its predecessor – when it brings us back to our own kind (when a young soldier dies, and Gary Oldman, as the leader of the human resistance, looks at him, stricken, we struggle to feel involved). That said, one of the most poignant scenes in the film is when Caesar returns to the home he grew up in and watches a video of himself as a baby, with Franco teaching him. We may not feel the pain of the loss of humans, but Caesar clearly does.

Helmer Matt Reeves (Cloverfield, Let Me In) does an excellent job taking over from Rupert Wyatt, who directed the last one, but he can’t quite surmount the primate/human empathy gap embedded in the script. At 130 minutes (25 minutes longer than Rise), the movie also feels a little long in parts (mainly the battle scenes). Still, in the dismal movie season that is summer 2014, so far, Dawn of the Planet of the Apes stands out as a work of serious science fiction that both entertains you and makes you entertain serious thoughts about the nature of life and humanity. It’s well worth watching.

One last thing: though the 3D is actually quite beautiful, it doesn’t necessarily add to the experience, so consider sparing yourself the money and the headache and seeing it in 2D.