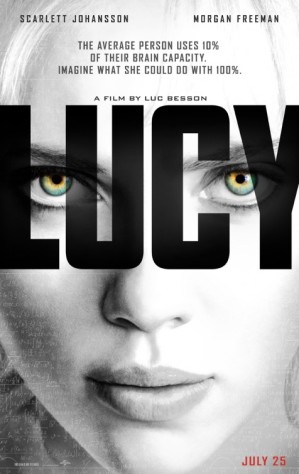 If Stanley Kubrick‘s least original pupil married John Woo‘s most scattered (yet devoted!) disciple, had a child together – perhaps watching Terrence Malick’s 2011 The Tree of Life at the moment of conception – and named her Lucy, she’d probably look a lot like this new film from French action-thriller writer/director Luc Besson (La Femme Nikita, The Fifth Element). Besson has almost always made films that combined the fantastic with ultra-violence – some of which are quite fine, such as his first (and my favorite) feature, the post-apocalyptic Le Dernier Combat – and here he is at it again in a story about what happens when one woman’s brain function increases from 10% to 100% power over the course of 24 hours … as she is trailed by Korean gangsters out for her blood. I have often found much to admire in Besson’s visual imagination, and much to lament in the illogic and near-idiocy of his scripts and dialogue, which has gotten worse with each film. Unfortunately for me, the latter overwhelmed the former in Lucy.

Scarlett Johansson – having a banner year with films like Under the Skin and Captain America: The Winter Soldier – plays the titular Lucy, a young American out for a good time in Taipei, Taiwan. Unfortunately for her, she picks the wrong boyfriend, and soon finds herself a captive of Korean mob boss “Oldboy” (sorry, that would be Min-sik Choi, who played him in another, better movie), who surgically sticks a large package of a synthetic blue crystalline drug (shades of “Breaking Bad“) in her abdomen, making her the most unwilling of drug mules. Unfortunately for him, his underlings can’t keep their hands off of her, and when she resists the rape, they kick and punch her until the drug seeps into her system, making her suddenly a superwoman. Why? It’s “CPH4,” ostensibly derived from the regenerative chemical inside a woman’s womb, and large amounts of it ingested all at once will apparently turn one into a deity.

Meanwhile, back at the academic ranch, Morgan Freeman – seen earlier this year in the equally ridiculous science fiction caper Transcendence – somewhere in Paris, is conveniently giving a PowerPoint lecture (reduced to bullet-point level) on what happens to the human brain when it is able to access more than its (he says) normal 10% usage capacity. Freeman imbues his scientist with all of the gravitas for which he has become known, but even he cannot make the reductive pseudo-intellectual discourse make sense. Eventually, we can guess, Lucy will find him, and perhaps he will be able to help her, or she him. But about those Korean gangsters . . .

If all you want is a good time, with reductive repeats of action scenes and car chases you’ve seen before, with actors who’ve done better work elsewhere, with all of it dressed up in the trappings of high-concept sci-fi, then Lucy just might work for you. But unlike, say, the last Captain America or this summer’s Snowpiercer – both of which gave us plenty of gun fights and choreographed violence, but also smart scripts – Lucy performs the opposite trick on its audience than it does on its heroine: we feel increasingly dumber as the film progresses. By the time the movie was over, my brain was truly mush.

There is one thing Besson tries for which I’ll give him credit, and it’s in the editing. Right from the start, he creates a series of Eisensteinian montage sequences where he jumps away from the main action for a second to show us a narratively unrelated image that then informs the next shot to which he cuts. True, this is as derivative as the rest of his film, but at least it’s interesting.

*Spoiler alert* Given what happens to Johannson’s character at the end of the film, perhaps the best and only way to view the inanity of Lucy is to read it as a weird hallucinatory prequel to last year’s Her. Ever wonder where that movie’s OS, Samantha, came from? Well, now you know.