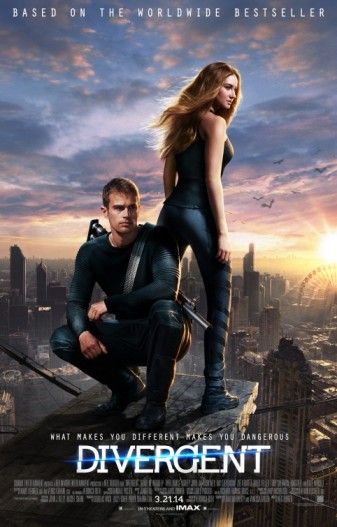 In a post-apocalyptic world, where the survivors once struggled in the aftermath of war but have since rebuilt their society in new and innovative – and, to some, frightening – ways, a young rebel will emerge in a time of crisis to lead the faithful forward on the path to a new and better life. Her name is . . . Beatrice Prior. If you thought I was going to write Katniss Everdeen, then you haven’t been paying attention to the marketing hype over the past month (and more power to you!). If you don’t even know who Katniss is, then I wish you the best in navigating the fevered dystopian landscape of today’s best-seller scene, as populated as it is with hit young-adult book series like The Hunger Games and Divergent. May the odds be ever in your favor.

The Divergent series consist of three books (surprise!), the last of which, Allegiant, was just published in October, 2013. The author is 25-year-old Veronica Roth, who sold the first book while she was still a Senior at Northwestern University. My hats off to her! I just wish the series were better and less derivative of so many previous works (The Hunger Games being only the most obvious source). I have read the first book and the second (Insurgent), and am now struggling through the third (really struggling). The writing has deteriorated with each volume, becoming ever more stale and desperate. I don’t know if I’ll make it to the end of Allegiant before my library e-book loan expires (I have no intention of buying).

Still, the first book had some interesting aspects to it, and since the movie hews close to its plot, I’ll briefly describe the world of both. In a Chicago of an unspecified future, the remnants of human civilization have divided themselves into five “factions” – Abnegation, Amity, Candor, Dauntless, Erudite – where the character trait implied by the faction name is practiced by its members to the near-exclusion of all other behaviors (if you’re looking at that list and wondering why “Amity” isn’t “Benevolence” – for example – to make it a perfect alphabetical list that would match the simplicity of the conceit, I have no answer for you.). Every Chicagoan must, at the age of 16, choose whether to remain in their birth faction or switch to one more in line with how they see themselves. Since the members of Abnegation are supposed to be selfless, they govern the city; Amity farms (don’t ask); Candor debates openly and without prejudice (which somehow serves the city); Dauntless guards the city’s perimeter; and Erudite gathers knowledge, invents things, and wonders why they don’t get to rule (why is it so frequently the intellectuals – often the targets of bullying in real life – who are the bad guys in fiction?).

Beatrice is from Abnegation, and on choosing day she switches to Dauntless. She is different than most others, however, for she is “divergent,” which means she is not simply categorized, and thinks outside the box. She is a threat to the world order. In the middle of the dangerous and life-threatening Dauntless initiation, Beatrice (who has now chosen to be called “Tris,” instead) discovers that there may be a plot to overthrow the current political system through violent means, with Erudite (of course) manipulating the Dauntless and using them as their private army. What clever little evil intellectuals they are!

In spite of my obvious cynicism (is it that obvious?), I kind of enjoyed the first book. True, the premise is absurd. Why those five factions? And would anyone really want to always be any one of those five characteristics, all the time? Besides that, though, I found the details compelling, and enjoyed the main character’s journey. So I was looking forward to seeing what the movie would be like, especially since it is directed by the man who gave us Interview with the Assassin and The Illusionist.

To be fair, if you’re a fan of the series, you will probably find much to like in the film. What differences there from the source material are so slight as to be meaningless. Neil Burger does a decent job with the action scenes, even if the violence has been significantly toned down for the PG-13 rating (and even if the CGI looks terrible). If you haven’t read the book, then why are you watching the film? The reviews have been terrible . . .

For me, the real problem lies in the casting of the main role. Shailene Woodley was wonderful in both The Descendants and The Spectacular Now, but here she is just wrong. I do not, for even one moment, buy her as a tough warrior, or even as a wounded sparrow about to become a tough warrior. She is too soft and inconclusive, even when she points a gun. Her co-star, Theo James, brings some nice gravitas to his role as Four, her trainer, but together they have no chemistry. Other fine actors populate the movie, from Ashley Judd and Kate Winslet to Ray Stevenson and Miles Teller, but there’s no escaping the central misfire. See it if you must.