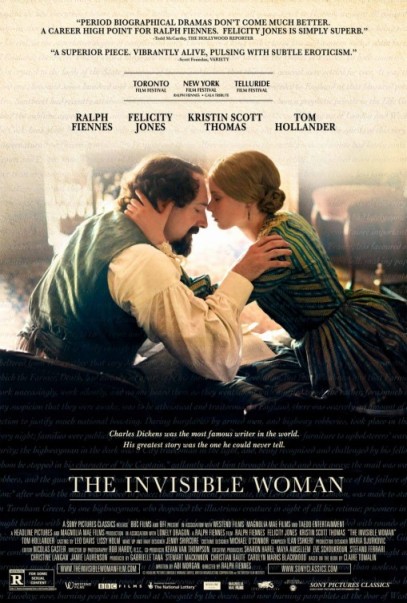 “There are dark shadows on the earth, but its lights are stronger in the contrast.” – from The Pickwick Papers (Chapter LVII) (1837)

“I took her hand in mine, and we went out of the ruined place; and, as the morning mists had risen long ago when I first left the forge, so the evening mists were rising now, and in all the broad expanse of tranquil light they showed to me, I saw the shadow of no parting from her but one.” – revised final sentence of Great Expectations, as originally published (1861)

Secrets and shadows twist and weave their way throughout the work of Charles Dickens, so it should not surprise us that the great 19th-century writer lived a secret shadow life of his own, hidden beneath a surface of upstanding Victorian domesticity. For the final 13 years of his life, Dickens carried on an affair with Ellen “Nelly” Ternan, a woman 27 years his junior. Though he officially separated from his wife – announcing such separation in a cruel and public open letter in the newspapers – he never divorced, and so young Ms. Ternan became, in effect, his shadow wife, never able to live openly with the man she loved. As with most private lives of public figures, however, the facts of the affair have long been an open secret, and in 1990 the British journalist and biographer Claire Tomalin published her own account of the romance, which she called The Invisible Woman. And now, actor/director Ralph Fiennes, with help from a marvelous screenplay by Abi Morgan, has brought the story to the screen, creating a powerful film that is as bracing in its emotional impact as the sea breezes that blast Nelly’s cheeks on her long walks on the beach.

First off, allow me to offer you some advice: avoid the trailer for this film at all costs. It promises a turgid and tawdry tale when the movie, itself, is a work of strong, yet nuanced, feeling. We begin, in the very first shot, on a wide vista of Nelly, played by a luminous Felicity Jones, walking on a gray autumnal seashore, and hold for a long time as she crosses the frame, with the ocean waves roiling in the background. It’s a vivid image of a woman bereft, alone with her thoughts, yet it is also quiet (silence is a constant theme in the film) and restrained. The sea stands in for emotion, which is (almost) always kept carefully at bay. We quickly realize we are in the hands of a master director, as Fiennes guides us expertly between the Nelly of 1883 (the year of the opening), and the Nelly of 1857-1865, with beautiful cinematography, thoughtful sound design, and perfect direction of the actors.

Nelly, in 1883, runs a boys school with her husband, yet cannot forget her (mostly) secret long-term affair with Dickens (who died in 1870). Every time his name is brought up, she can barely conceal how much his memory overwhelms her, even though her husband, as she acknowledges to a local Reverend (a solid John Kavanagh), is a good man. Dickens was, and is, the great love of her life.

We soon meet Charles Dickens, himself, as the film begins toggling between times. As played by a fine Ralph Fiennes, himself, and ebullient with the joy of celebrity, Dickens is both author and performer, enjoying the spotlight and yearning for more than his world-weary wife can give. His world is filled with other writers (Tom Hollander is a terrific Wilkie Collins) and artists. When he meets Nelly, an aspiring actress possessed of great aesthetic sensitivity but less actual talent, he falls hard for her, and she for him. Soon, with the tacit approval of her mother (a sharply practical Kristin Scott Thomas), they embark on an affair that threatens to go public. Dickens then breaks off relations with his wife (Joanna Scanlan, brilliant) – whose grief when her son reads her husband’s public rejection of her is one of the most affecting moments in the film – and begins to live and travel with Nelly, exclusively (while openly declaring that there is no affair). Good for him! Less good, however, for the women.

Indeed, The Invisible Woman is not a biopic about a great writer. It is Nelly’s story, and an in-depth look at how love can both liberate and destroy. The Nelly we meet at the beginning is a shell of a woman; Dickens’s wife, Catherine, is devastated by her abandonment. There is no happy ending for the women, while the man gets to have it all (for the most part). Kudos to Fiennes and Morgan for putting all sides of Dickens on the screen. He is charismatic and imbued with many fine qualities, but he is also thoughtless. The long years of silence spent in the shadows leave Nelly with no choice but to walk on the beach and let the sea express her turmoil. Fortunately, for Nelly and for us, she is granted a moment of some cathartic release, thanks to the persistent Reverend, and unburdens herself of her secret, at last. As the film ends, we see that she has, finally, been able to build a life post-Dickens. He will always be a part of her, but she abides and survives. We, the audience, meanwhile, are transformed by her story and, blasted by the same ocean winds, moved beyond measure. This is cinema at its best.