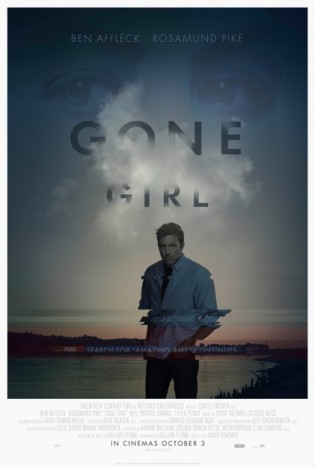 David Fincher releases his 10th feature film today, adding to a vastly entertaining and compelling body of work that includes music videos, commercials and 9 previous films that, love them or hate them, have proven him both a great visual stylist and powerful storyteller. Gone Girl is an adaptation of the best-selling novel of the same title by Gillian Flynn (Gillian pronounced with a hard G), and the script was written by Flynn, herself (as a former writer for Entertainment Weekly, she perhaps feels she knows a thing or two about movie structure). I was not a fan of the book, although I recognized that it was a strong page-turner and fairly well-written (in terms of narrative structure). No matter – it was a huge success, and now Fincher – a director I admire, and whose last film, The Girl with the Dragon Tattoo, while not a strictly necessary work (since the original had been so fine), was still a more-than-worthy adaptation of a potboiler – has turned his considerable talents to its cinematic translation. I wish he had chosen a different source text, but what’s on the screen is nevertheless fascinating to watch, if also odd and repellent. There’s nothing wrong with unlikeable characters – indeed, the late great Patricia Highsmith specialized in loathsome and/or morally opaque protagonists – but one has to be in the right mood for it, and the characterizations had better be masterful. Flynn is no Highsmith, that’s for sure, but Fincher is, himself, a master filmmaker, so what we get mesmerizes even as it repulses. And it’s also pretty funny in spots.

Gone Girl starts on the 5th wedding anniversary of Nick and Amy Dunne, a couple that has recently relocated from New York (Amy’s hometown) to North Carthage, Missouri (Nick’s hometown), after both of them lost their jobs. The marriage, once deliriously romantic, has now turned sour, and when Amy disappears, Nick becomes the prime suspect in her assumed murder. An affable sort, Nick does himself no favors by trying a little too hard to be friendly to the army of well-wishers who descend upon the town. When the police discover Amy’s diary (along with other incriminating evidence that includes Amy’s financial support of the marriage and a bumped-up life insurance premium), which starts positive and is then increasingly filled with frightened entries, Nick appears done for. The media – including a character very loosely based on Nancy Grace – crucifies him, then North Carthage’s citizens follow, and it’s only a matter of time before the police will arrest Nick.

Except that all may not be as it seems. Suddenly, midway through the story, we discover new details about Amy that radically change the dynamic of the narrative. No plot spoilers to follow. Suffice it to say that this twist is by far the most interesting aspect of the novel, after which we are left with unappealing characters who behave in predictable ways while reinforcing stereotypes of male and female behavior (with a surprisingly healthy does of misogyny) that are just fundamentally not that interesting.

Thank God for Fincher. Even more than his trademark brilliance with the visual language of cinema, he brings to Gone Girl a delightful strangeness in the sound design. This is a story about people whose behavioral mannerisms are completely faux constructs (Flynn’s seeming point being that all relationships are about performance), and from the opening off-balance close-up of Amy’s head, accompanied by the odd synth chords of composers Trent Reznor (of Nine Inch Nails) and Atticus Ross, we enter a world of artifice that feels almost dream-like in its presentation of the facts (such as they are) of the story. In a way that words, alone, cannot convey, Fincher uses image and sound to plunge us into, first, a dream, and then, as the story gets darker, a nightmare. Only the director of such masterpieces as Se7en and Fight Club could pull this off. I did not enjoy the movie, but I was inexorably drawn to it (though it could have been about 20 minutes shorter).

Ben Affleck (bulked up for his upcoming Batman v Superman film) and Rosamund Pike (Jack Reacher) star as Nick and Amy. They’re good together, and the fact that neither has great acting range is probably appropriate for such shallow characters. The supporting cast is excellent, including Kim Dickens (good in everything she does, including “Deadwood“), Neil Patrick Harris (so fine, as always, in “How I Met Your Mother“) and Tyler Perry (yes, that Tyler Perry). There are a lot of reasons to see the film – especially if, unlike me, you’re a fan of book – including the many darkly comic moments sprinkled throughout (I laughed quite a bit, actually), even if the writing is not among them. Steel yourself for the nasty misery of Nick and Amy’s marriage, and hop to it. Fincher is always worth watching.