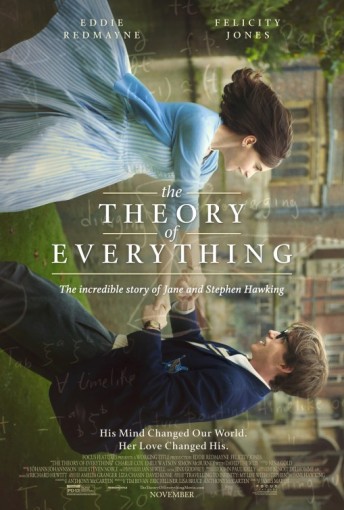 The Theory of Everything (James Marsh, 2014)

Biopics – or biographical pictures – all face the same challenge: how to reduce the essence of one person’s life into recognizable and digestible components while balancing the needs of drama within the approximate two-hour length of most movies. It’s not an easy equation to solve, and sometimes the better films are the ones that choose to focus on one particular moment in that person’s life, as in last year’s marvelous The Invisible Woman, about the affair that 19th-century English author Charles Dickens had with a much younger woman. Since Felicity Jones, a powerfully engaging young actress who portrays Jane Wilde – or the woman who was physicist Stephen Hawking’s first wife – in The Theory of Everything, was also in The Invisible Woman, perhaps we can claim that one of the requirements of a successful biopic be that it feature her. For while The Theory of Everything has the usual flaws of many a biopic – compression, conflation and oversimplification – it is nevertheless among the best of its genre, thanks in no small part to Jones and Eddie Redmayne (My Week with Marilyn), who plays Hawking in an astonishing, career-making performance that rivals anything the great Daniel Day-Lewis did in My Left Foot.

One thing this film does not do well, though, is explain Hawking’s theories of the universe (which is clearly not its intention, anyway). For that, I recommend you check out Errol Morris’s superb 1991 documentary A Brief History of Time, which was based on Hawking’s best-selling book of the same title. In that film (or book), you’ll learn all about Hawking’s obsessions with (as his website tells us) “gravity, black holes, the Big Bang, the nature of time and physicists’ search for a grand unifying theory.” Hawking is probably one of the most important scientific minds of the 20th (and now 21st) century. But that’s what The Theory of Everything is about, despite its grandiose title.

Instead, this is a story of love, resilience and overcoming adversity. When the movie begins, in 1963, Hawking and his bride-to-be, Jane, are students at Cambridge University. They meet cute, fall in love – she studies medieval Spanish literature and he, physics, and it’s the difference that attracts – all is beautiful, and then one day Hawking takes a nasty fall and it is revealed that he has amyotrophic lateral sclerosis (or ALS) and only two years left to live (Hawking, born in 1942, is still alive as of this writing). It is, as his father intones, “a heavy defeat.” But Jane genuinely loves Stephen, and is a lot tougher than she first appears to be, and soon she is nursemaid to the great (though physically deteriorating) genius, putting her own dreams on hold to be wife, and then mother, as the couple has not one, but two and then, finally, three children. She is a saint, though, to be fair, the movie is based on Jane’s account of her life with Hawking, so we’ll have to take the truths therein as simply her own version thereof.

As a portrait of two strong-willed individuals, the film is a marvel. But while Jones is luminous, it’s Redmayne who impresses the most. From a dashing nerd, he morphs into a twisted physical shell of a man with eyes that shine through the pain to show the giant brain within. It is a truly remarkable transformation. And we need to see Hawking’s daily struggle in this visceral way so that when, towards the end of the movie, in front of an American audience during his book tour for A Brief History of Time, his computer-generated voice (Hawking underwent a tracheotomy in the 1980s after a bout with pneumonia, and lost his vocal chords) intones, “‘However bad life may seem, while there is life, there’s hope,” it resonates with meaning. So while you may not learn a lot about science in The Theory of Everything, you may learn a lot about life, and living it to the fullest.