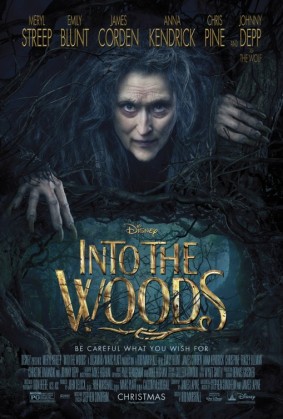 I was one of the few people I knew who did not like (Academy Award-winner!) Chicago. Something about that film’s ceaseless wink-wink-nudge-nudge smirk of knowingness throughout its 113-minute length really rubbed me the wrong way. So when I saw that its director, Rob Marshall, was back with a new musical, I assumed I would hate it. The fact that I actually liked one half of the movie is either a tribute to the source material – Stephen Sondheim’s stage musical of the same title, with which I was previously unfamiliar – or to the director’s maturation. Either that or I’ve mellowed with age (maybe I’ll adore Marshall’s next screen musical). I suspect, however, that it’s all about Sondheim.

If, as was I, you are unfamiliar with the plot, such as it is, here is a brief summary: Sondheim has taken various characters from different mostly Brothers Grimm fairytales – including Cinderella, Little Red Riding Hood, Jack and the Beanstalk and Rapunzel – and has woven them together into one tale using an original story of a childless baker and his wife as a framing device. It turns out that an evil witch who lives next door to the baker has placed a curse on his house that, until lifted, will forever prevent the baker and his wife from conceiving a child. But . . . if the baker will but procure a red cape, a golden slipper, a white cow and some corn-yellow hair, the curse can be lifted. You can guess which fairytale character will provide which item (hint: Jack has the cow).

For the first half of the movie (that which constitutes the first act of the musical), it’s all terrific fun. With a delightful cast that includes Meryl Streep (August: Osage County) hamming it up as the witch, a charming Anna Kendrick (Pitch Perfect) as Cinderella, Johnny Depp (veteran of another Sondheim adaptation, Sweeney Todd) as the big bad wolf (also hamming it up), an absolutely amazing Chris Pine (Star Trek into Darkness) as a narcissistic prince, the always-lovely Emily Blunt (Edge of Tomorrow) as the baker’s wife, and the heretofore-unknown-to-me-but-very-good James Corden (“The Wrong Mans“) as the baker, the film zips along, tweaking the tales we know so well, and that estrangement from the familiar works a powerful magic. But then, in the second half, the story begins to unravel, and the whole enterprise sinks into the same mud hole into which our heroes try to trap an errant giant.

We’re meant to learn that having dreams come true doesn’t necessarily bring about happiness, and that true peace and joy comes from the hard work of living. I get that. But that point is so obvious, and so out of the blue and in such sharp contrast to the crazy fun of Act I, that it’s just a major bummer, instead. And once you lose that magic, you begin to realize that the threads uniting the characters are actually pretty thin, which means the big emotional beats don’t resonate. I don’t know – maybe it played differently on the stage. Or maybe I’m just a curmudgeon. But hey, I loved Sweeney Todd, and that mixed humor and the macabre quite well. Here, when people die or suffer misfortune, it just feels random and very sad.