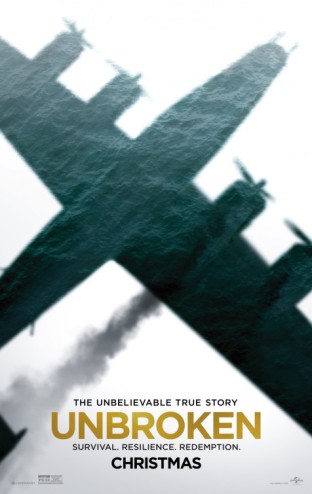 A few years ago, I read author Laura Hillenbrand’s Seabiscuit, from which the 2003 film of the same title was adapted. I loved the book, and was impressed with Hillenbrand’s writing and attention to detail. I had also enjoyed the movie, which I had seen prior to reading the book, but the book was the superior work of art. Though the movie told an enjoyable and gripping tale, the richness of character and atmosphere that was so present in the writing was somewhat lost in the translation to the screen.

I suspect that something along those lines has happened with Unbroken, the second feature film from actress-turned-director Angelina Jolie (In the Land of Blood and Honey). Since I haven’t read the book, however, I cannot say for sure whether the problems with the movie lie with the source material, Jolie’s direction, or the work of any of the (four!) screenwriters, two of whom just happen to be Joel and Ethan Coen (Inside Llewyn Davis). Well, that’s dumb, actually, because a screenplay is the blueprint for any film, and what we have here is a film that starts off impressively, but which then goes steadily downhill (mirroring the fate of its protagonist) in its second half, so I blame the script, first and foremost. Overlong and overly fixated on the depredations of psychopaths, Unbroken takes an inspirational true-life story and turns it into an exercise in torture porn. Before it slides morosely into narrative despair, though, the film is as powerful as any war and/or survival film made previously.

Louis Zamperini (played as an adult by a very good Jack O’Connell, soon to be seen again in the upcoming ’71), the son of Italian immigrants in California, spends his youth getting into serious trouble until his older brother Pete encourages him to try out for the track team. Soon, young Louis becomes a running sensation – the “Torrance Tornado” – and when 1936 rolls around he finds himself in Berlin for the Olympics, where he is the fastest American in the 5000-meter race. He has his eye on the next round – the 1940 Tokyo Olympics, but history gets in the way. We learn all this in flashbacks intercut with the “present” of Zamperini at war in the Pacific, as a bombardier. And what a present it is! The film opens with a brilliantly staged aerial battle between the American bombers and the Japanese fighters sent to stop them. With this sequence, alone, Jolie proves her mettle as a major director. She may lose her way later on, but for a while she flirts with greatness.

After escaping the Japanese air assault, Zamperini and his team, led by their Captain, Phil (a for-once very impressive Domhnall Gleeson (Frank), are sent out on a rescue mission to recover other Americans lost at sea. Unfortunately, their plane crashes in the ocean, leaving only three survivors (including Zamperini), and for the next 45 days these poor men suffer horrible deprivations of water and food, as well as shark attacks (though they prove to be the more dangerous predator when they pull a shark aboard their lifeboat and eat it) and Japanese strafing. Finally, Zamperini and Phil are rescued (the third having died around day 30 or so), but by a Japanese vessel, after which they enter a whole new kind of hell. And that’s when the film goes south.

It’s not that Zamperini’s story is not a powerful narrative of resilience and survival; it’s just that much of what happens in the camps into which he is placed, one after the other, has already been shown – with greater artistry – in other films about World War II, including David Lean’s epic 1957 masterpiece The Bridge on the River Kwai. In that film, the great Oscar-nominated Sessue Hayakawa did a wonderful job evoking the psychosis and tragedy of the camp commander, Saito, without resorting to over-the-top performance tricks. In Unbroken, the designated torturer, Watanabe, is played by Japanese pop star Miyavi without subtlety or nuance. He’s a nut, and we spend far too much time with him. Jolie would have been better served to compress the camp scenes – we get it, it’s a terrible experience – and focus, instead, on the inner workings of Zamperini’s mind, so that we might understand how he willed himself to survive, much as Alan Parker did for his protagonist in the 1978 Midnight Express. Instead, we get something more like Mel Gibson’s 2004 The Passion of the Christ: all agony and no redemption.

Still, when it works (i.e., in Act I), the film is effective, indeed. And Zamperini, who died just this year, in 2014, as a closing title card inform us, seems like a man well worth remembering. It’s wonderful to see photos and video of the real man during the end credits (though the music Jolie has chosen to play underneath the photos is sappy beyond belief). A half-good tribute is better than no tribute at all.