I am back in Austin, Texas, for another SXSW! I came here in 2014 to check it out for myself, with an eye to coming back a year later with Stevenson students in tow, and lo and behold, that is what I have done. I am teaching a course this semester entitled “Emerging Trends in Digital Media and Film,” and the centerpiece of the class is a trip to Austin to see how the themes we have been studying play out in the real world. And here we are. I am seeing films, panels and exhibitions that interest me, while the students pursue schedules of their own devising. Our hope is that we head back to Baltimore at the end of the week with a richer perspective on the world of media and film than we had before.

We arrived yesterday, Saturday, March 14, around 11am, and by the time we checked into our hotel and drove to the Convention Center, it was already close to 1pm, so we missed plenty of amazing screenings and events. Fortunately, there was, is and will be so much else to see. Here is what I saw (I stuck to movies, though today I will broaden my plan) once we settled in, with very brief comments (as a film critic, I will save the real reviews for if/when the films are actually released in the Baltimore area):

I am a big fan of Alex Gibney’s work (witness my reviews for The Armstrong Lie and We Steal Secrets), and I am fascinated by the life and work of Steve Jobs (I loved Walter Isaacson’s biography of the man, and am an avid user of Apple products). So it was with great anticipation that I sat down to see the world premiere of Gibney’s latest film (following right on the heels of Going Clear: Scientology and the Prison of Belief, which premiered just a few months ago at Sundance). Janet Pierson, Head of SXSW Film, introduced Mr. Gibney as one of the most prolific filmmakers around, and that is an understatement! Unfortunately, with this particular documentary, that overcommitment is showing. For the first time while watching one of Gibney’s movies, I feel as if he could have used a strong editorial hand other than his own to provide artistic oversight. The film is a mess, and feels self-indulgent. There is good material here, for sure, but the approach feels scattershot. What kind of story is Gibney trying to tell? Is this a film about Jobs, our appreciation of him and the objects he created, or something else entirely? Any of those options would have been fine, but Gibney has chosen not to decide. And how could he make a film about Jobs and not once mention Jony Ive, except in passing? Incredible!

I do not care about basketball. Never have, and probably never will. But this film seemed like it would be interesting, as it was about a man – Serge Ibaka, forward for the Oklahoma City Thunder – who (as the film’s website explains) “escaped the war-torn streets of the Congo and played his way to the top of the NBA.” And, certainly, this 54-minute documentary is not without items of interest. Unfortunately, the movie about Ibaka is not as good as the man, who in many ways is a truly exceptional and inspirational human being. It feels too much like a promotional piece. I’m glad I learned about someone I had never heard of before, but knowing the little about him that I do now, I wish he had been better served by the filmmaking. Director Adam Hootnick (Unsettled) does his subject no favors by underscoring all of the emotional beats with overbearing music. 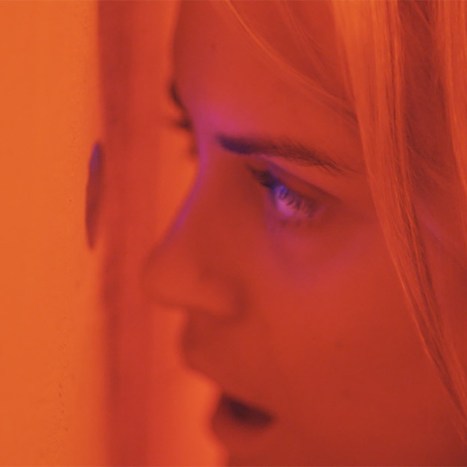 After two documentaries that left me somewhat cold, I finally hit the screening jackpot with this raunchy sex comedy from the director of Creep (which I missed at last year’s SXSW festival). Starring Taylor Schilling (“Orange is the New Black“), Adam Scott (“Parks and Recreation“), Jason Schwartzman (Rushmore) and Judith Godrèche (Potiche), The Overnight is a delightfully off-beat and unpredictable film about a dinner party to which newly minted Los Angelenos Schilling and Scott are invited by oddly compelling Schwartzman and Godrèche. Featuring alcohol, drugs, some boobs, full-frontal prosthetic penises and paintings of male anuses, the movie is definitely for adults only. But boy is it fun! If it loses energy towards the end, that doesn’t mean we haven’t laughed outrageously on our way there. What makes the film work is the delightfully charming chemistry between all four of the leads and the disarmingly laid-back vibe to the whole affair. To be seen whenever it comes to a theater or streaming service near you.

I end this post with a photo from The Overnight‘s Q&A, featuring the director (tall man in white shirt with microphone), Godrèche (next to him), Schwartzman (in red shirt), and assorted other crew members: